BlizzCon 2021 finally revealed important details about the upcoming Chains of Domination, 9.1 update for Shadowlands including expanding the Maw, new additions to Torghast, a new raid, megadungeon, changes to PvP, and exciting new rewards.

Jeremy Feasel, Senior Game Designer, revealed the story-centric changes that are coming in the next update, Chains of Domination.

The next update will center around The Jailer and his malicious plans for the fate of the Shadowlands. We will finally experience the true might of Zovaal as he makes his first attacks against the forces of the four covenants. But the covenants will not remain passive during this assault, players will aid their covenant in entering the Maw and taking the fight directly to The Jailer himself.

Expanding of the Maw

We will now spend more time in the Maw as well as explore all new areas. The most substantial of these being Korthia.

At the end of the cinematic trailer for Chains of Domination, The Jailer is seen attaching himself to a floating island off in the in-between. This has been revealed to be Korthia, a massive new section of the Maw filled with ancient secrets. It will take on the form of a lost city inhabited by Oribos’ attendants and protectors. Adventurers can expect to see the familiar architecture of Oribos in a dark new light. In order to aid in their exploration of these areas, players will now be able to mount up while in the Maw.

In addition to these new areas and enemies, players will be able to unlock Maw-themed rewards such as two new mounts: an undead horse and a giant severed Hand of Domination (as seen in Torghast).

The Sanctum of Domination is the main foothold of The Jailer within the Maw. It will be a massive, 10 boss raid featuring fights with many of the Jailer’s personal retinue. Players will be able to go toe-to-toe with The Tarragrue who appears during failed Torghast runs. The raid will also feature the Fate of the Damned which is The Jailer’s personal torment chamber. The Sanctum of Domination also see the return of Kel’Thuzad and Sylvanas Windrunner as encounters during the raid.

Torghast will experience a myriad of changes in the Chains of Domination update including new wings with brand new layouts and artistic styles as well as new enemies and traps. But fear not, players will also be equipped with new power-ups to aid their ascension of Torghast.

The Chains of Domination update will also see the return of the megadungeon. In the style of Operation: Mechagon, the Broker Trading City dungeon will feature a total of eight bosses. The dungeon will reveal plenty of background information surrounding the enigmatic Broker culture. While fans were not given specific information, the second half of the dungeon will be centered around a heist-themed encounter. A mischievous Broker has stolen an ancient artifact and must be stopped. Groups will be forced to follow the thief through various portals, fighting bosses along the way in order to apprehend the thief.

The rewards from the dungeon will include Broker themed pets including a cat, a rat, and interestingly, a gem-eyed wyrm. The wyrm has been revealed to be an important part of Broker culture, serving as a sign of personal wealth. A special Broker style mount, a flying disc will also be available. Of course, as with all dungeons, a dazzling array of new weapons are also up for grabs.

While Feasel admitted the team is still working on specifics, Chains of Domination will also feature a bolstering of the Covenant system including additional conduits and new conduit types. The ultimate goal is to increase customization options for players as well as to introduce different ways to gain power levels.

An abundance of rewards will be available through the Covenant campaign including new flying mounts. Kyrian will take to the skies on a Flying Centurion mount. The Nightfae have called upon ancient allies and will ride atop a fearsome Wolf Serpent. Necrolords have reigned in the wild Giant Corpseflies found around Maldraxxus. And, finally, Venthyr will enter battle on the backs of Stoneborn Brutes.

As well as these new mounts, players will unlock new cosmetic armour sets. This will be the first time that armour sets will be able to be worn regardless of armour type (a cloth-wearer will be able to equip the plate cosmetic). Kyrian will be outfitted in a courier-inspired set reminiscent of the Roman god, Mercury. Nightfae will don armour decorated in stag horns and various flora of Ardenweald. This will come in four different, season-themed colourways. Necrolord will receive a set inspired by classic necromancers. Venthyr will arrive on the scene in a set of finery suitable for any fancy party.

Finally, fans will be relieved to hear that flying mounts will return to Shadowlands. Once players have completed their respective covenant campaigns, they will be able to return to the skies.

The new 9.1 update will include an item level increase and new affixes for Mythic level dungeons for the PvE-oriented players in the crowd. Chains of Domination will also usher in PvP Season 2, including a refresh of the honor talents with game developers taking a closer look at underutilized talents and introducing new ones in an effort to shift PvP meta. New season rewards have arrived in the form of a recolouring of the Gladiator and Mythic plus mounts, as well as an entirely new PvP mount—a gorm. 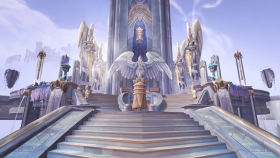