Buyer's Guide to the New Consoles

PlayStation 4? Xbox One? Forget ‘em; they’re old news. The new consoles are here, and with them comes a brand-new wave of questions, concerns and curious confoundment from folks who haven’t spent the necessary hours learning the ins and outs of each machine. Thankfully, we’re not quite so sensible with our time: we’ve done our homework and are prepared to give you the lowdown on every console available to buy this Christmas. Do you need an Xbox Series S or a Series X? Will a PlayStation 5 Digital Edition meet your needs? And what about the Nintendo Switch; where does that fit into the whole equation? Let’s find out! This is the best PlayStation gets in 2020. It plays 99% of PlayStation 4 games and, of course, all of your PlayStation 5 games. Discs? Digital? It doesn’t matter which form your games take, this machine will accept them. Additionally, it also plays 4K Ultra HD Blu-rays, regular Blu-rays and your old-fashioned DVDs (if you’ve still got some laying around). With 825GB of solid-state storage (667.2GB usable), you shouldn’t need to worry about running out of space immediately after launch, but don’t be surprised if those gigabytes get used up quicker than an F1 car uses fuel. Oh, and while the PlayStation 5 can play games in 4K resolutions, you don’t need a 4K TV to use the console; your regular old 1080p TV will do just fine. Did you read that last paragraph? Well all of it still applies here, except for the portion regarding dics. While this model is cheaper (plus a touch lighter and thinner) than its subtitle-less older sibling, it comes at the cost of a reliance on digital goods. Your only choices for accessing content for this machine comes from the PlayStation Store or any other content provider Sony gives the “go ahead” to. For many consumers, this won’t be an issue; for some, however, it'll be a major turn-off. In terms of performance and storage, though, this is identical to its costlier counterpart. No, it’s not a sleek modern fridge; it’s an Xbox Series X. This is Microsoft’s top-tier console going into this generation, and by all accounts, it’s the most powerful one of the lot. You’re not here for specs, but just know that this is capable of running games in native 4K at 120FPS with variable refresh rates and ray tracing. It’s a beast. In terms of storage, you’ll have a 1TB SSD packed into the box (802GB usable), with convenient, albeit not cheap, expansion options available via a proprietary expansion card from Seagate. If you don’t fancy shelling out £219.99 for the aforementioned storage, you can invest in a cheaper external hard drive, although you’ll still have to transfer most games over to the console’s main storage pool to play them. Just like the higher-end PlayStation 5 model, the Series X plays all your discs—DVDs, Blu-rays, 4K Ultra HD Blu-rays—as well as games from every previous generation of Xbox. The list of old games which are compatible with the Series X, sadly, shrinks the further back you go; almost every single Xbox One game is supported, but the number of compatible original Xbox games doesn’t quite reach 50. 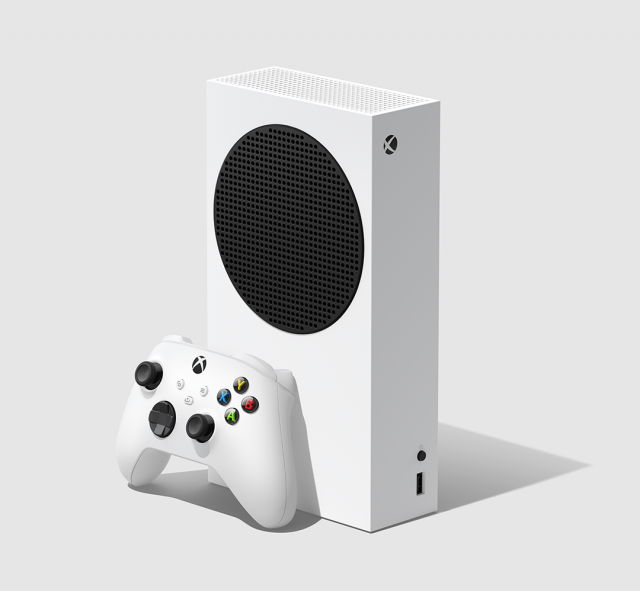 Unlike the PlayStation 5 Digital Edition, there’s more (or rather, less) to this cheaper model than the mere removal of a disc drive, although it doesn’t have one of those either. The Series S is noticeably less powerful than the Series X, topping out at a native 1440p resolution reaching up to 120FPS (with upscaling to 4K, so it’ll look fine on your 4K TV). Additionally, this model doesn’t apply all of the same retroactive upgrades to previous-gen games as the Series X. While your Xbox One and Xbox 360 games will still look better on the Series S, they won’t look quite as good as they would on the Series X. A lack of storage also serves as a blow to this console’s appeal: it only offers a 512 GB SSD (with 364 GB usable). No matter how you look at it, that’s not a lot of storage. Microsoft assures fans that the Series S versions of games can be optimised and cut down in terms of GB in comparison to their Series X equivalents, but it remains to be seen whether most developers will put in the work required.

It’s less powerful, it’s got worse specs and it doesn’t have all the goodies present in the Series X (including the lack of a disc drive), but at such a low price and with such a sleek profile in comparison to the chunky Series X, it’s still a tempting purchase. Nintendo’s mega popular console hit the market with one compelling gimmick: “what if your main console could be played like a handheld?” The answer: it’d sell like gangbusters! The switch is the must-have for playing Nintendo’s line-up of superb titles (plus a plethora of other outstanding games). If you want to make use of it as a home console (i.e. you want to plug it into your TV with that handy little dock and those detachable controllers), you’ll need to grab yourself the more expensive Switch, this one. With 32GB of inbuilt storage (25.9GB available to use), you’ll probably need to consider picking up a micro SD card to expand it. It accepts cards up to 2TB, but you hopefully won’t be needing that; a sizable micro SD card can be picked up for next to nothing nowadays. What’s a Switch without its gimmick? The Switch Lite! This is a slightly cheaper version of the Switch, one that—technically—still plays all the same games, only exclusively in handheld mode. With no detachable controllers or motion controls, there are a handful of games that’ll present you with issues on the Switch Lite (most notably Super Mario Party and the Just Dance series), although there are workarounds that involve connecting a separate pair of Joy-con to your Switch Lite, but… well, who wants to do that? Other than the key points above, the Switch Lite is slightly smaller with a smaller screen to match, although not drastically so on either front. The storage solution is the same too: 32GB (25.9 usable) with micro SD expansion options.