My Five Worst Movies Based on Videogames

Here’s a fact for you: The highest ever rating the Rotten Tomatoes review site has given a movie based on a videogame is 44%. While on Metacritic it’s a paltry 58/100. It’s a genre that began in 1993 and - despite every movie being critically panned - they continue to make enough at the box office to justify Hollywood churning out more. The most recent videogame based movie released, The Need for Speed, grossed over $186,000,000 worldwide - somehow.

From a choice of nearly thirty American-produced titles (Japan has had a fair few of it’s own) which are the worst? This list only includes movies that made enough at the box office to be of some significance, others - like the excruciatingly painful Postal and Double Dragon - were seen by so few people that I’m not taking them into account.

Super Mario Brothers - The movie that started it all. In 1993 Nintendo’s popularity was riding high, so - showing their usual inability to come up with an original and creative idea - studio executives approached the game company about making a movie loosely based on 1985’s Super Mario Brothers. Disliked by the majority of Mario fans - and pretty much everyone else - the whole thing was a bizarre mish-mash of ideas from the game. The movie’s main audience was comprised of very young children who giggled at the Mario references, plus the fact it was cheesier than sock full of stilton. If you were one of those kids and feel nostalgic for it, I say this: watch the thing today, it’s utter balls. Amazingly, they managed to get the late Bob Hoskins and Dennis Hopper to appear as the main stars, with John Leguizamo also appearing as Luigi. Hoskins later stated it was the worst thing he had ever been a part of, with Leguizamo adding they were both regularly drunk in order to get through it all. Something that viewers can relate to.

Doom - When I heard there was going to be a movie adaptation of one of my favourite games I put aside doubt and got a bit excited. Then when I heard it was going to have Dwayne ‘The Rock’ Johnson in it I progressed to being very excited. I could just imagine it: The Rock, fighting the legions of hell, blasting his way through robotically enhanced demons with an array of weapons, before facing off against Doom 3’s giant Cyberdemon. Then I watched it… 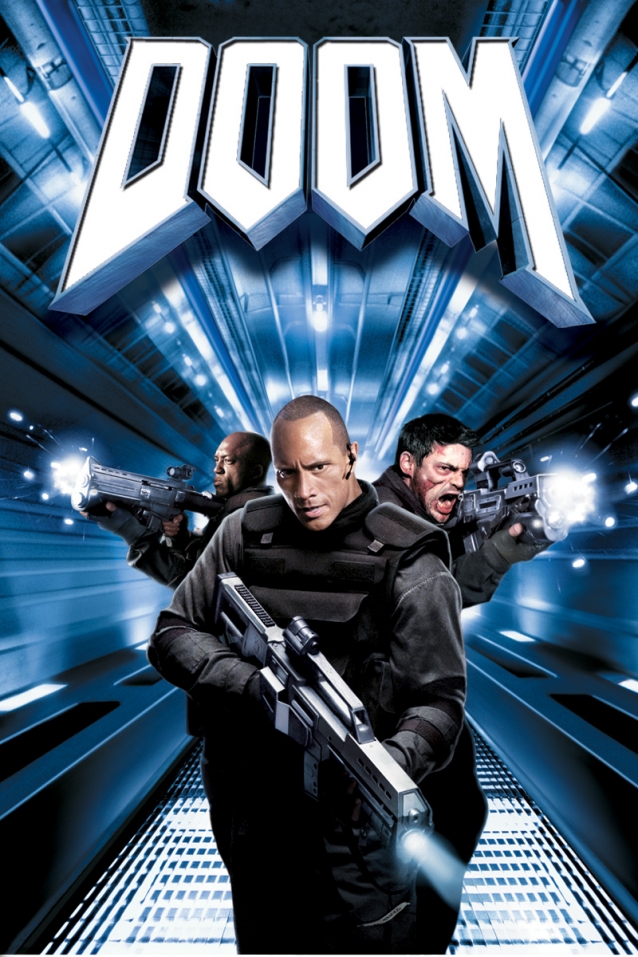 Hmmmmm… Well that was bit disappointing, to say the least. For a start there’s absolutely nothing supernatural at all in the movie. It’s got a horribly contrived plot about humans being infected and mutated, and there’s not a single Hell Demon in sight. Worst of all, The Rock plays a bad guy. Throughout the entire movie it seems the only ‘good’ bit I recall - and the part most resembling the game - is the 30 second scene where the camera adopts a kind of first person view. Seeing Doom taught me to never look forward to anything again, something I should have learned after watching The Phantom Menace. House of the Dead - Making a movie based on a light gun game is always going to be a bit of a
challenge. However, getting ‘master of shit’ Uwe Boll to direct it is just asking for trouble. It scored a whopping 4% on Rotten Tomatoes and was voted 41st worse movie of the 2000’s.You would find better acting in a school nativity play, it has a plot so incoherent I suspect it was written by a homeless person who has conversations with their feet, and it manages to be about as scary as a Scooby Doo cartoon. While whoever had the idea to splice actual footage of the House of the Dead videogame into the movie’s action scenes should be applauded, it took some real outside the box thinking in order to make this abomination even worse. The only reason it’s not higher is because it made so little money it barely qualified for this list, and, being a Uwe Boll masterpiece, most people just expected it to be awful.

Street Fighter - The fact this movie made almost $100,000,000 is just depressing. Like a movie pantomime, this is another cheese-fest full of christmas cracker quality one liners. You sometimes expect to hear the audience booing and hissing every time M.Bison appears.

Again it bears almost no resemblance to the (admittedly thin) story of the game. While another massively contrived and ridiculous plot manages to distract from the hammy acting, though only by making you fall asleep. For a movie about street fighting, there’s very little actual fighting in it!
A Special mention must go to the casting director of Street Fighter: The heavily accented Belgian, Jean-Claude Van Damme, was a natural choice to play all-american airman Guile. While the man famed for playing the modern Gomez Addams, Raul Julia, absolutely chewed the scenery to bits as a camp, unintimidating M.Bison. Kylie Minogue did make a convincing Cammy, though the memory of her role in this was tainted a few years back, when the notoriously sleazy Van Damme confessed he cheated on his wife with her during filming. She doesn’t come across quite as sexy once you realise the muscles from Brussels had his greasy paws all over her half the time.
Also of note is that just before the movie was release Raul Julia suddenly died - presumably of shame.

Alone in the Dark - Another movie that just manages to make it onto the list, as it barely scraped a $10,000,000 return from its $20,000,000 budget.
I would rather poke my own eyes out with toothpicks than watch this again. Truly this is Uwe Boll’s Citizen Kane of cack. It won him the Golden Raspberry award for worst director, as well as winning the worst picture, director and actress trophies at the Stinkers Awards. Getting an amazing 1% on Rotten Tomatoes and 9/100 on Metacritc, many thought reviewers were still too easy on the movie. Christian Slater’s career was on the rocks by the time he accepted the lead role in this, an example of how thinking “things can’t get much worse” isn’t always the case. It’s often reference as ‘The worst movie with a high budget’, another accolade Uwe can be proud of.
Being a big fan of the original games, I was curious to see what the movie would produce. Other than the characters names, it bears almost no relation to the Alone in the Dark series at all. Which makes me wonder why they even bothered calling it Alone in the Dark in the first place? Unless it was a horribly cynical way to get more people to watch it, trying to attract fans of the game, like me… bastards. The movie’s actually so different from the games, I wonder why they even bothered to make it a ‘horror’ at all. Why not a romantic comedy? One where tough, recently divorced, Edward Carnby is shown how to feel love again by an intelligent yet ditzy archaeologist, played by Sandra Bullock.
Away from the idea of it being a Hugh Grant vehicle, Uwe’s Alone in the Dark starts with an almost two minute long text/voiceover introduction. Although, by confusing and boring the pants off people at the very start of the movie, it manages to set the tone nicely for what’s to come.
Much like Street fighter, quality casting is evident here, with Tara Reid playing a totally convincing, multi-lingual archaeologist. I also seem to recall there only being one type of monster in the movie, used repeatedly to save ‘special effects’ costs. Plus an awful lot of German heavy metal for some reason. The problem with recalling Alone in the Dark is that I watched it several years ago and, like traumatic childhood memories, my brain blacked some of it out. The one residing memory I have is me struggling to get to the end of it, then thinking: “That, was truly the worst videogame based movie - and possibly worst movie of any kind - I have ever seen”.

So that’s my list of the worst we’ve had so far. If it all fills you with bile, then consider this fact: There are almost as many videogame based movies scheduled for production in the next five years as have been released in the last twenty. These include such ripe pickings as Angry Birds, Pikmin and Sonic the Hedgehog. Uwe Boll’s never been in such high demand.

I decided to only include films that grossed over $10 million at the box office, otherwise it would of ended up being 'Uwe Boll's five worse movies'

I actually loved the first Mortal Kombat movie, thought the sequel was balls, though. I even bought the CD of the soundtrack. I'm so old...