Super Famicom Games That You Can Enjoy Without Knowing Japanese

Since it is the 30th Anniversary of the Super Famicom this month, I decided to get my console hooked up and play some of the games in my collection. I never realised that I own 62 Super Famicom games, and there are a bunch that can still be enjoyed without having to know Japanese. A lot of the games I have are ones that never left Japan, so playing them is a totally new experience. It reminds me of being young and renting games at the video store: you basically relied on the box art to make your choices. Instead of sending you out to guess and possibly buy something unplayable, I’ll let you know some games that should be checked out. There are a lot of games that meet this criteria that I own, so I’m going to divide all the titles over a few articles.

I’ll give a brief description of the type of game and what is going on. Don’t forget that if you happen to play the game and come across some text you don’t understand in the game, you can use Google Translate. It allows you to take a picture, or point your phone at text on the screen and it will try to translate it. I use this when I first start a game and I’m checking out all the options on the main menu. It is incredibly helpful and will save you a lot of research.

You may have seen the review on the site recently for Umihara Kawase BaZooka, a new game that came out for the switch. This is the first game in the series starring school-aged Umihara with her pink backpack and trusty fishing rod. The lure on the fishing rod is special, it can attach to walls like a grappling hook allowing you to reel in the line moving you to where the lure is attached. Once you figure out how the ninja rope type physics work, you will be addicted to this game. When you fall or get hit by an enemy you will respawn back super fast to make your next attempt. The enemies you come across in this game can be reeled in and tucked into your knapsack to defeat them and increase your score. This game is super fun and unique, I highly recommend it. 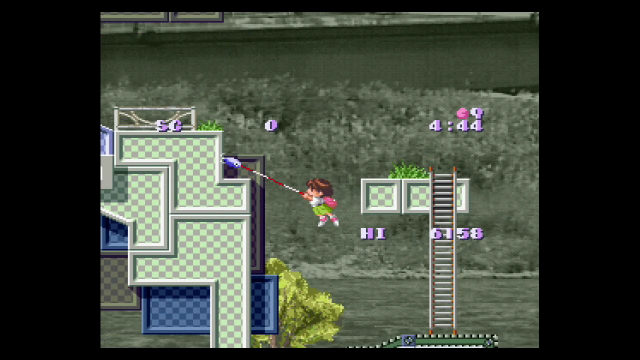 This game is full of super fun ninja platforming action for one or two players. This game is a follow up to Ninja Kun: Majou no Bouken and Ninja JaJa Maru-kun that appeared on the original Famicom. You play as a chibi ninja dressed in red whose girlfriend is kidnapped by a flying demon with a skeleton skull head. So of course it is up to you, armed with ninja stars to defeat all the enemies and rescue your girl. The game offers a two player cooperative mode, where you are both trying to complete the levels together. Luckily there is no friendly fire, so you won’t be accidentally hitting each other. The second player’s ninja is blue, so you definitely won’t be confused. When you defeat an enemy, you will see a white spirit floating away. You will want to be sure to grab these to fill your spirit meter. Once the spirit meter is full, you can unlock special abilities like having a clone of yourself to help out, or rapid firing your ninja stars. The action happens both horizontally and vertically, so it definitely keeps you on your toes trying to avoid all the enemies that surround you. The game is not super hard or long, but it definitely offers a fun platforming experience! 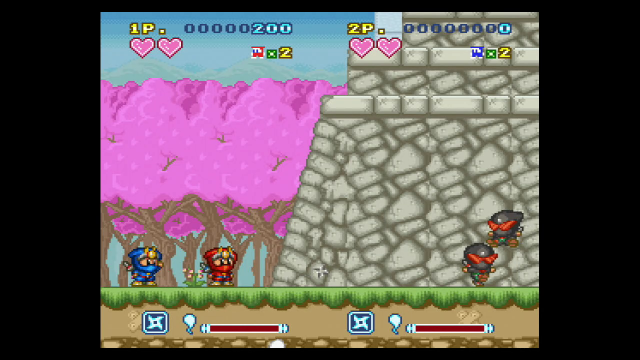 Majuu Ou is definitely a crazy game with a super creepy atmosphere. This is one of the more unique platforming games I have played in a while. You look like a Sylvester Stallone/Rambo type character with the red bandana, jeans and a white sleeveless shirt. He’s not going to punch his way through this game, he is armed with a trusty handgun that never seems to run out of ammo. I haven’t looked up the full story yet, but in the introduction you find out your friend has sold his soul to the demons. Visions of a woman and a child appear on screen, I’m assuming they are his wife and child. When I looked at the translation of the introduction text, you see that they were sacrificed to bring back the “King of Demons”. The main character, named Abel in the intro, after hearing his family encouraging him, instantly gets powered up. He gains the ability to double jump, making it a lot easier to defeat his former friend.

As you explore the level you will see a lot of freaky stuff like dead bodies hanging from the ceilings, people who seem to be nude behind bars in a cage in the background and zombies coming after you. When you are trying to defeat the zombies our character knows to automatically aim for the head first then destroy the body after. You don’t have to worry about aiming your gun, you are just in charge of pulling the trigger. The game looks great, and the music really fits the atmosphere of the game. Guaranteed you will come across some crazy looking creatures you never would have expected. The big spider with a human face for his butt was quite disturbing. I never realised how much I appreciate being a character with the ability to dive and roll out of the way of enemies.

I’m pretty sure the demons, super creepy visuals, and gun use were part of the reasons why the game was never released outside of Japan. I highly recommend hunting this one down and checking it out if you can! 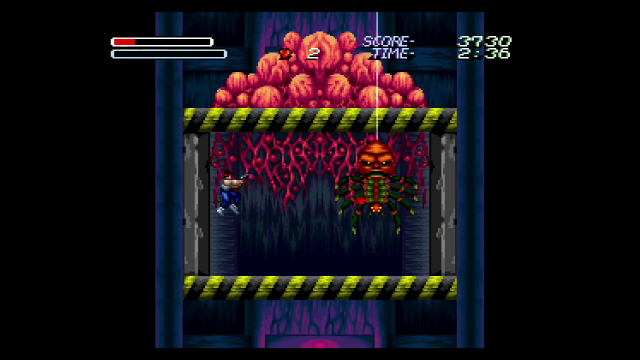 I’m sure everyone is familiar with Tetris, the highly addictive puzzle game from Russia, that has appeared on pretty much every game platform and cell phone in one way or another over the years. This game has a mode of the traditional Tetris you know, where you are just trying to clear out the lines before your stack hits the top. But the mode that you probably aren’t familiar with is Bombliss. I know Bombliss from playing it on the Famicom, but it is so fun to play here on the Super Famicom with updated visuals and audio. In Bombliss, you are still trying to clear the lines, like in normal Tetris. Thing is, the Tetris pieces have bombs in them. The amount of bombs in your completed line will determine how much of the line will blow up. In normal Tetris, the full completed line will disappear, but in Bombliss a completed row will just stay there if there are no bombs in it. When your bombs do go off, they won’t only destroy the row you are working on, they can also take pieces of other rows with them. This game is so incredibly addictive and a great twist on such a classic game. 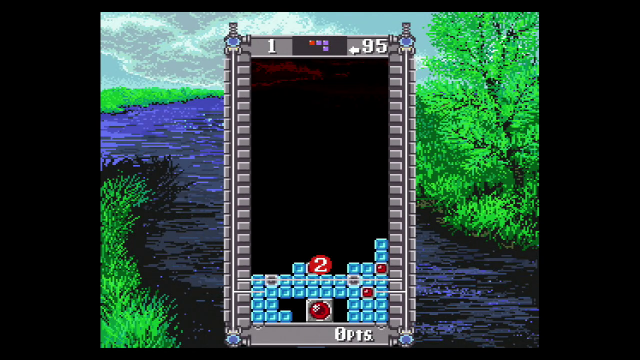 I’ve loved playing Bomberman ever since I was a kid and played it on my original Nintendo Entertainment System. Lay down a bomb beside a wall, and run out of the way so you don’t get caught in the explosion. Bomberman B-Daman has our traditional Bomberman character crossing over with the B-Daman anime series. The anime tells of school kids competing in secret B-Daman tournaments with special figures. Bomberman takes the form of a B-Daman figure that launches orbs to destroy other objects in his way. 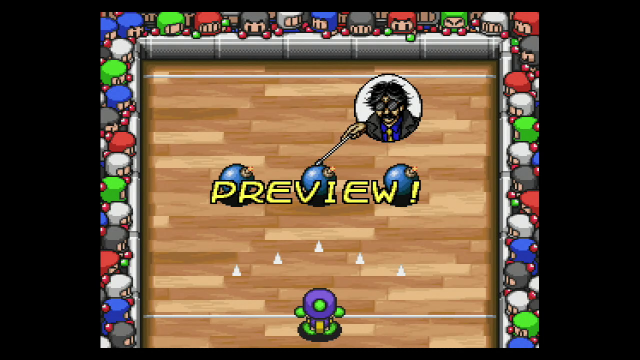 In this game, instead of laying bombs, he is shooting at bombs that are in the level to make them all explode. You can earn up to 100 points per level depending on how many of the bombs you can set off with one shot. There is a preview for each level to show you how the bombs are arranged and if they move, how they will go through the stage. This gives you a couple seconds to plan out your strategy. Bomberman can move side-to-side to line up the shots, but you only get two chances to get as many points as possible in that stage. If you don’t get 100 on your first try, then you get a second chance. At the end of ten stages, the game adds up your totals and shows you where you place on the leaderboard.

The game starts off quite easy, but definitely gets harder as you progress in the stages. It will take a lot of quick thinking to figure out the best way to take out all the bombs. The menu in the game is completely in English, and it even has the option to customise your own B-Daman figure. You get to choose the main body colour, the colour of the gloves and boots, and even the expression on the face. This game is definitely a good brain-workout one, that I really enjoy.

So those are just five games that you should check out. I have a lot more in my collection that I will continue to share! If you have tried out any of these games, or if there are any others that I have missed, be sure to leave a comment. I’m always on the hunt for more games to add to the collection!

As someone with a Super Famicom and only a few games so far, this is an excellent article! Thank you!

I have a lot more to talk about so definitely writing more articles about Super Famicom games :)