Welcome back to another edition of GameGrin’s Outfit of the Month - a place where we take a closer look at the looks in videogames within the month! From spotlighting brand-new debut releases, or cosmetic additions in established titles, to revisiting older games that have been ported onto newer platforms… OOTM is a space that brings fashion into focus as a means to show off the latest in gaming.

As always, we’d love to hear your honourable mentions and suggestions for OOTM and other T-Pose articles in the future! Without further ado, let’s talk game fashion in the month of March!

30th of March on Microsoft Windows With the whole Kingdom Hearts series releasing on PC, it seems like a better time than any to talk about the fashion choices of one of the most stylish characters in the whole series. I am of course referring to the Keyblade Master, Aqua. Now when you think of the fashion of Kingdom Hearts you might imagine a lot of belts, big shoes, and wide trousers and while that is true for the most part, Aqua rises about the rest for having simply one of the best outfits that is simply stunning.

The base of Aqua’s outfit is made up of a black and navy blue, high-collared halter top, black shorts, and thigh-high leggings. This gives off a sporty vibe which is no surprise given how much combat she ends up in. Having an outfit that provides room to move is a good choice, but Aqua does not let functionality stop her from being stylish. Starting off with a black corset that is tied with white lace, she also adds some more colour to the outfit with two pink straps intersecting over her chest, complete with a silver badge.

Her arms feature white bell-sleeves with small, segmented pieces of armour providing some protection around the elbow, along with fingerless gloves. Speaking of armour, her choice of shoes for this outfit are silver boots that are covered in armour plates with the addition of some hooks on the outside of each boot.

Finally, to give her outfit some finishing touches Aqua has two strips of blue cloth draped over each of her hips, with a smaller, white strip of cloth tied around her waist. These not only add a bit of colour to the outfit but also flow as she moves adding a sense of elegance. Additionally, Aqua can use the armour on her arm to transform into her Keyblade Armour which then sees her change into a full suit of armour, ready for any fight, or travelling through space. No, really.

Aqua has by far one of the more unique outfits in the Kingdom Hearts series that is not just a series of belts. It is functional, stylising, and suits her appearance and personality. It is no wonder then that Aqua is one of the most important characters in the series. Though, if you want an explanation for that you will need to play about four different games. - Judgemental Waifu

8th of March on iOS and Android Mixing up a mean drink in Fate/Grand Order’s mystery-focused event, James Moriarty dons the disguise of a humble bartender to keep track of an auction involving mobs, mages, and a linden leaf that gets stolen away before any bidding can begin. However, in stark contrast to his traditional role of criminal mastermind, here Moriarty (and the player) play detective: exploring the motivations of six deadly and morally bankrupt suspects vying for control of a magical artefact.

Normally done up in an extravagant brown suit inlaid with gorgeous blue Ulysses Butterflies, the Napoleon of Crime’s Grey Collar outfit goes for a simpler and more laidback black vest and dress pants over a collared grey shirt with rolled-up sleeves. To go alongside this choice, this Archer has decided to let his hair down from his usual slicked-back look to appear more approachable and easy to speak with, the traditional emotional state for fictional bartenders.

However, despite the efforts made to appear as a down-to-earth bartender, this silver fox leaves plenty of room for his unwavering sense of style and sharp-dressing to shine through. Moriarty’s blue butterfly motif carries through, represented both by the emblazoned golden butterflies on his vest and the choice of blue highlighting much of this simple outfit. Of particular note is the sheer clean order to the positioning of his blue accessories, from the spotted tie between the butterflies, through the diamond-shaped buttons of the vest, to the tied-off belt. This is carried through with the underside of his apron with a flourish of blue that only becomes more flashy when this false bartender enters conflict, implying the shedding of his disguise, much like a butterfly. - Erin As couples counselling goes, working together to solve the emotional problems within the relationship through environmental obstacles isn’t unheard of - having your souls bound to toy model versions of yourselves to face gigantic, sentient, and violent representations of your martial snags is... unorthodox.

Unfortunately for Cody and May, the latter has happened. At least one silver lining from this predicament is that they look delightfully adorable! Like little toy borrowers, both are equipped with a length of rope and a little button brooch on their cable knit jumpers. Where May is a miniaturised wooden mannequin, Cody is formed from pliable modelling clay. Complementing the earthy theme, Cody exudes a warm orange and natural green colour scheme. He dons cargo trousers that fold at the waist, with a single sprout protruding from the crown of his tousled grassy head of hair.

May on the other hand is clad in stark primary colours of blue and yellow. Her patchwork denim jeans match her thick blue yarn coils that are tied up in a top knot bun, laced neatly with a lovely yellow ribbon. She also sports some bridgeless circle glasses made of a thick wireframe and a teeny tiny pair of brown clog-like loafers.

I hope if I ever have the misfortune to have a therapy session as extreme as this, that I look just as endearing and bonny as May & Cody. - Danielle You bet I jumped at the chance to include an entirely classic gaming outfit. At this point, one might as well call Crash’s gear gaming couture, because the chances are, if you’re part of the gaming community this lewk is on your radar.

It is but a simple combo, featuring only three pieces but they work together seamlessly. His baggy shorts finish just below the knee and feature the lighter blue accents on his waistband and cuffs just to provide a little extra pizazz. The (presumably vegan) leather fingerless gloves provide ample protection to his furry lil’ fingers whilst still giving enough wiggle room to be as dextrous as necessary. Let’s not just glaze over the fact that they match the colour of his eyebrows. I mean, who does that? Crash does. Crash is wearing what essentially looks like red Converse high tops which somehow match the colour of his nose. This is one colour-aware bandicoot folks.

Crash might not be wearing the most resplendent regalia, but why fix what ain’t broke? This works for him on a functional and fashionable level, and I am living for it. - Emsey

Voilà! Our pick of the best-dressed for the month of March is Aqua from the Kingdom Hearts series - of which the entire series is available to play on PC! 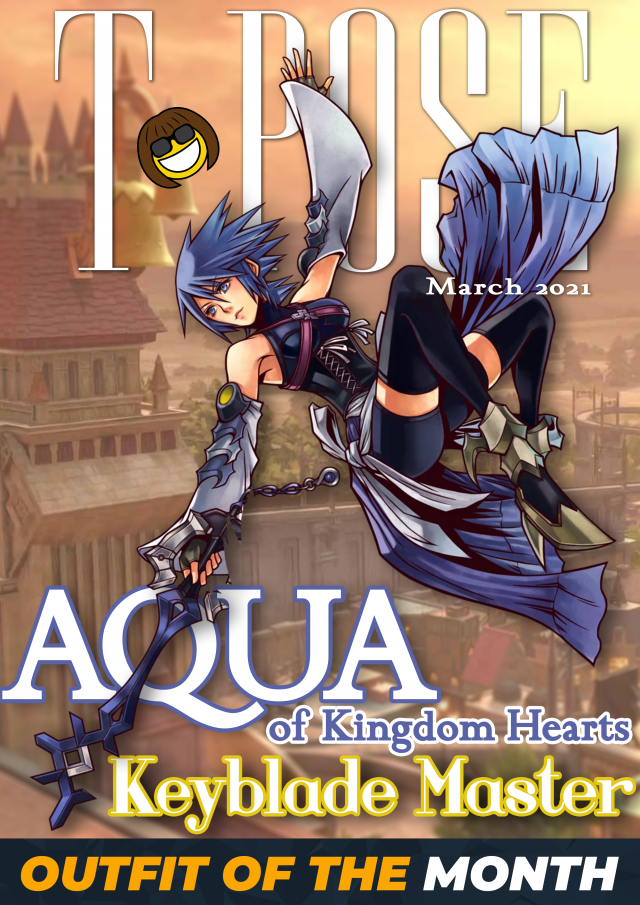 Prev
T-Pose: Outfit of the Month

State of Play February 2021 - A Deep Dive into the PS5 Features of Crash Bandicoot 4: It's About Time

Crash Bandicoot 4: It’s About Time Coming to Next-Gen and Windows