What Are NFTs, and What Do They Have to Do with Gaming?

Throughout the past year in gaming, no conversation has been more alive with discussion and derision than NFTs. Non-Fungible Tokens — originally a side project in the new wave of interest regarding cryptocurrency outside of Bitcoin — have come a long way from confusion regarding ownership of digital art, to now being regarded as the hottest new way for finances to thrive in your videogames.

Where do they come from? What do they do? Why has everyone suddenly taken notice? These are all valid questions that require more than just a hefty explanation. This is what this article hopes to solve, as we explain in brief (No, really) the bare necessities of this new craze. A craze that has tech-bros salivating, publishers grinning, and gamers filled with animosity towards the idea of passive income infecting their favourite games.

There is one stipulation before we begin, and that’s the angle of this article. From a personal standpoint, I see no point in the idea of implementing NFTs into games and find their practices are ones we’ve seen in the past. However, this is an opinion that doesn’t exactly go against the grain, so this piece serves as purely informational, not educational, in the hopes you can extract your own opinion from it.

Without further ado, get your right-click ready, and let us begin. 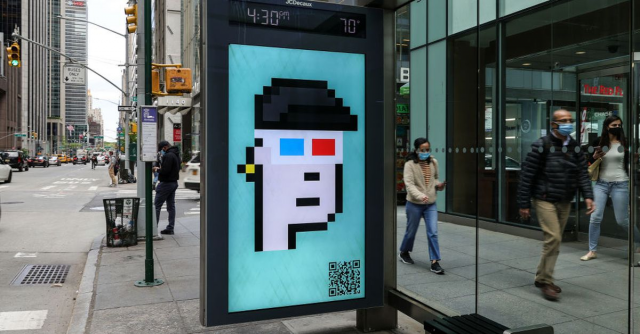 Non-Fungible Tokens are, in their most basic essence, proof of ownership, for the original creator of the artwork, and the customer who purchases it. An artist will choose some of their work to sell, which can range from artwork, to videos, to digital assets like models of people and items, and choose a marketplace that tends to specialize in NFTs, like OpenSea.

From there, any and all business involving the artist's work is placed into the blockchain, which is essentially a large uneditable public ledger. In the case of NFTs, it will verify and attribute the creation of the NFT to one specific person, along with any transactions involving it. There are many different blockchains, each of them possessing different qualities and detriments, but that controversy is in due time.

A large part of the “charm” surrounding NFTs is that the most popular merchants of them tend to use procedural generation in their creation. You may have noticed brands like the Bored Ape Yacht Club (BAYC) or Lazy Lions generating thousands of their avatars for sale on NFT marketplaces, pushing for this idea of individualism. In any case, both specific and randomized collections of NFT do cover the market. 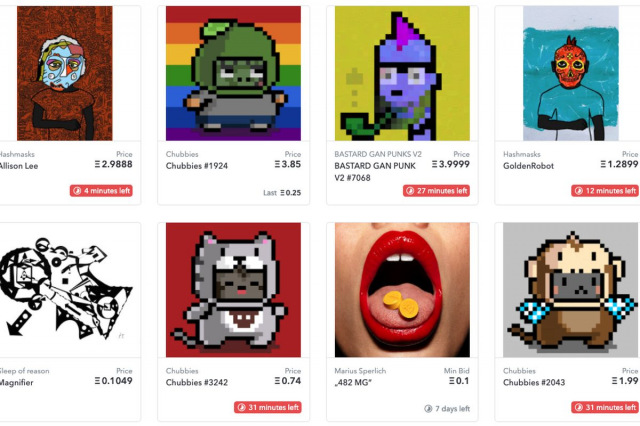 What’s The Sell With NFTs?

This is a question marred in many buzzwords, all of them not even vaguely encompassing the one angle which is driving all of this: Money. The one main angle is that due to the NFTs' permanent residence on blockchain technology, it allows the original creator to generate kickback income from any and all purchases involving their created asset, which is objectively good. It allows artists to retain that work through permanence online, without theft of said work.

Still, most of that is thanks to the idea of decentralized finance, the concept that everyone is now in control of their own money. It’s sovereignty over wealth, or rather without the hassle of a third party like banks or credit card companies. This is possible due to advancements in something called “Web3”, a new concept of the World Wide Web that allows for such decentralization. This quote from Blockchainhub Berlin explains it as best it can:

If we assume that the WWW has revolutionized information and the Web2 revolutionizes interactions, the Web3 has the potential to revolutionize agreements and value exchange. It changes the data structures in the backend of the Internet, introducing a universal state layer, o en by incentivizing network actors with a token.

What does this mean in the long run? Well, not much in terms of actual growth regarding internet capability. Web3 is all about the security of finances and transactions, no monetization of personal data, placing blips like security breaches or stolen data on singular minute points, rather than a company server. As for NFTs, they don’t really fit into the discussion all that well, as while assets are decentralized, NFT's excuse for being so is borderline maligned, which… 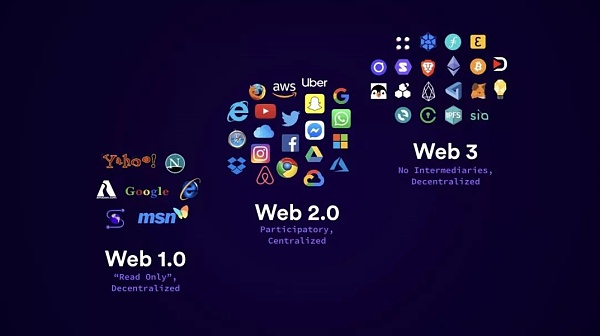 What’s so Bad About NFTs?

Despite promising an informational angle, there are certain caveats that must be addressed in regards to how NFTs work, and the limits they place on creation and production on the internet. “Artificial scarcity” is a term you’ll see pop up in the discussion about NFTs for a while, as they seem to have a tight grip on how much to produce, whether it’s because of demand, or because of the minting costs — the latter of those being the most controversial aspect of crypto-based discussion.

What is minting? It’s the verification of your NFT, allowing it to be placed on the blockchain for sale, and doing so is an algorithmic process of insane magnitude. To mint an NFT requires an immense amount of power (something which all crypto has been under fire for in recent years), and also needs to be paid for, with “gas fees” — most notably on the Ethereum blockchain, which is the most popular currently.

Now, these fees can vary between different blockchains. For example, Tezos, regarded as one of the energy-efficient blockchains, still charges based on the amount of gas used to mint the NFT, and the Ethereum blockchain gas fees can vary wildly depending on the demand at that current moment. Both of these illustrate a point that if NFTs were to get popular, the strain on energy resources they’d have would be monumental, which we’ll get to.

Another important addendum is that despite artistic freedom in how you gain capital and income from purchases of the NFTs you minted, there is still a lot of art theft occurring on NFT marketplaces like OpenSea and Rarible. The solution for this, from sources who’ve attempted to inflict copyright strikes on stolen artwork, is just to ignore it. Instead, many have resorted to reporting the NFTs to Google instead, which has worked out better for artists fighting to retain their work.

How has this happened? Well, despite the claim of decentralization and a free online identity that isn’t marred by personal data collection, there is still a layer of anonymity for buyers and sellers alike, due to digital wallets only being identified by numbers and not names. It is a shame, and one of the many, many, many teething problems occurring with this push for “Web3” and its applications on the internet.

What Does This Have To Do With Gaming?

Yes, this is GameGrin after all, not CryptoGrin, so of course, the NFT discussion has reached the idea of making the gaming landscape a better place. This isn’t something that’s just popped up overnight either, as there is an influx of crypto-mining and crypto-earning games currently on the market. This is all on PC though, although that hasn’t stopped something like Cooking Mama from supposedly sneaking crypto-mining software into its game, but anyway.

The truth is that aside from implanting blockchain technology onto games, the concept will have to stay as such until the environment is there. The console market cannot support it without an external source that can be verified by partners like Microsoft or Sony, and the PC market is caught in two ways about it. While Valve and Steam have banned crypto-based games on their marketplace outright, Epic and their store have welcomed it. 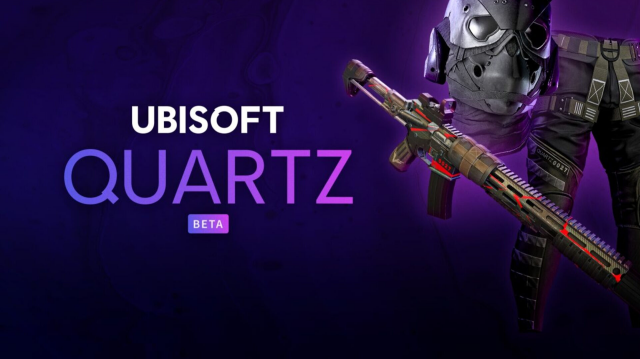 Honestly, outside of the “Metaverse”, that hot new thing Mark Zuckerberg pushed which reminds you of a Halo wedding your friend had in 2010, crypto-based gaming in franchises you recognize are few and far between. Tom Clancy’s Ghost Recon: Breakpoint is potentially the most famous example of this, as armour NFTs can be bought or earned via an insane amount of game-time (600+ hours in some cases), hosted on the Tezos blockchain. Other than that, NFTs exist outside of the game structure, relegated to what is essentially expensive digital merchandise (A good example being the recent Konami announcement about Castlevania NFTs).

No, instead there are a lot of unique games being made to occupy the crypto/NFT angle, a lot of them being original, in some capacity. If you’d like further information regarding them, then I recommend Saberspark 64’s fantastic video on Axie Infinity, or Dan Olson’s Twitter thread; concise catalogs on several NFT and crypto-based gaming projects they've come across via Discord invites. The latter is an utterly phenomenal showcase in flows, advancements, and simple tricks many are susceptible to while crypto and NFTs are still in their infancy.

As for what the console market gets, we've already mentioned Ubisoft’s recent launch of “Quartz”, as well as Square Enix’s president showing interest in NFTs. What this means for upcoming games from either company mostly remains to be seen, with the only activity from Ubisoft Quartz being for the aforementioned Ghost Recon: Breakpoint. What happens if Breakpoint goes down though? Furthermore, what happens if the game gets updated and your NFT is no longer compatible with the new version? 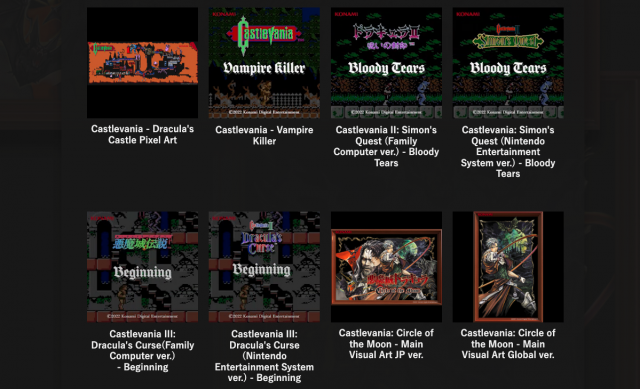 These are questions that have yet to be answered properly, but that hasn’t stopped commentary regarding the supposed versatility of any NFT used in these games, promising that their availability in other titles and projects would be possible. If you’re confused by what I mean, allow me to explain briefly: Imagine, if you will, the Asiimov camo for the AWP in Counter-Strike: Global Offensive as an NFT. Now imagine that for some reason, Counter-Strike: Global Offensive has had its servers taken down permanently.

Initially, you’d be hooting and hollering about how your token has finally been funged, but it’s okay! Because the times have changed, and now that Asiimov camo? It’s available to be used in games like Fortnite, Call of Duty, or Battlefield! How is this possible? Well, it isn't right now, and maybe not ever, but what if it was?! To the moon!

Hypothetical or not, a lot of this doesn’t change the fact that this “craze” hasn’t reached the audience you’d believe for such a boom to take place. It’s reported that between February and November, only 360,000 people were trading 2.7 million NFTs between them, with a market value of $40 billion, with 80% of that being held by the top 9% of crypto wallets. These numbers don’t imply a thriving audience. No, this implies that whales are once again responsible for a movement in gaming that no one can practically afford. 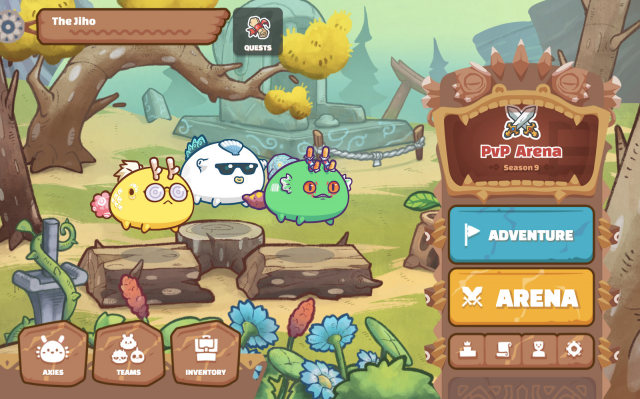 Crypto, as a whole, isn’t going away. You’d have to be wearing horse blinders to disagree, and there are elements of this “Web3” craze that are cause for praise and celebration. Whether it’s the protection of personal data from companies ready to hoard it, or a new type of currency that can allow for freedom with your own income, there are positive aspects to appreciate. NFTs however, are a drop in the bucket, and when it comes to their attempts to make a statement in the gaming landscape, their work is already done by more efficient clients.

There’s nothing I could personally say further in any capacity about how pointless an endeavour like NFTs are in videogames, and instead can only amplify more staunch voices that are able to correctly debunk the promises that NFTs supposedly offer. For that, I recommend Chris Pollock’s articles discussing the communication and infrastructure games possess and how they can’t just “transfer NFTs from game-to-game”.

Final note? Watch yourself on the internet, kids. Keep your monkeys close to your chest.