Rovio has so many iterations of Angry Birds, it’s almost confusing. You have the original catapult-wielding birds, racing, a recent RPG and a couple of tie-ins, of which this is one. Now, the Star Wars tie-ins are the catapult-the-bird style - Angry Birds Transformers changes it up quite a bit, making it a run-and-gun game.

The Eggspark has landed on Piggy Island and is trying to change it into a robotic utopia. Luckily it’s also changed the birds and a handful of pigs into cyborgs. Playing as the Transformer birds and pigs, you run along the scenery whilst being attacked by other pigs. The aim is to try to destroy them before they kill you. You don’t control the running, just the aiming and the special moves, such as energon shield, an airstrike or simply to transform. They can remain transformed for only a short time, and it’s usually used to outrun the giant columns that fall onto you. 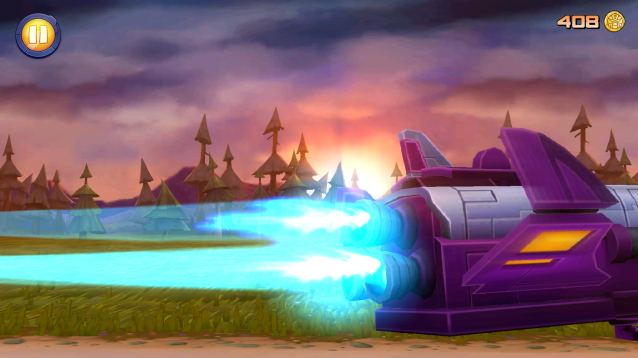 You take damage slowly in the earlier levels - unless you get hit by a column. Your health appears as hearts floating above your character’s head, letting you know how much more damage they can take. Once at zero, Astrotrain (your entry and exit for each level) teleports you aboard and you have to retry the level. Good rule of thumb, avoid the columns. If you do lose health, you need to pay coins to refill it before entering a level.

The graphics are nice and vibrant - everything looks nice and clear even on a phone display. However, it may be the display or more likely the game, that sometimes when you tap on something to attack it - a TNT crate, or a glass block - it doesn’t lock on correctly. It might go to the one beside it, which wastes shots you could have used to get another pig.

Killed pigs are used as payment to unlock characters from their frozen prisons. I’m unsure how much heat cybernetic Suidae can be turned into, but the game decides on some arbitrary numbers - multiples of 100 usually. Unlocked characters can then be used for other missions, as you don’t get to decide who to use - each level is for a specific Autobird or Deceptipig. Each one is different, with movement speed and weapon type. Grimlock has a laser, Bumblebee can go faster and has a blaster while Bludgeon has a three-shot blaster. 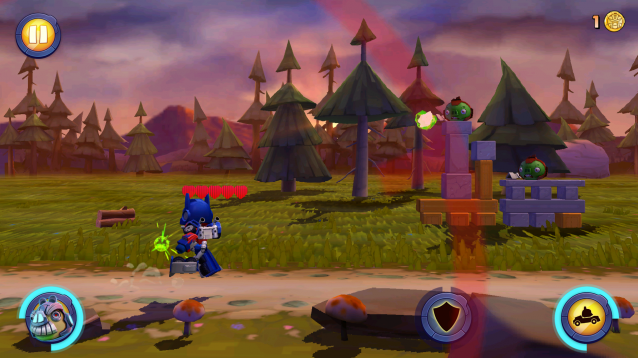 But on the subject of the levels, for each section you unlock with coins (a lot of coins…) you only get a few more levels. And you can’t unlock sections until you’ve upgraded your bots - the higher their level, the higher your player level which opens up the sections for unlocking. This is a problem as you have to wait while the bots are upgrading (some literally taking hours), or spend the premium currency Energon. Say you’ve managed to save up enough Energon - you still have to earn the coins in levels. Which means replaying levels to earn coins - but once you’ve completed a level it remains cleared for a while, until it’s once again hit by a cyberdrone. Whilst it is cleared, though, the level will earn you up to 200 coins. Transformations take longer for later levels, so whereas you’ll wait fifteen minutes for an early level, you will have to wait a few hours for the chance to replay a later level. Unless you spend Energon, and unless that character is in the middle of an upgrade…

The only other issue is the frequency of adverts. It is a F2P game, but video ads are everywhere. Before levels, after levels (optional, to earn more pigs and coins), in the pause menu… And it really wants you to sign into Facebook, too.

Some levels allow you to team up with someone from your friends list. Or if you’re not signed in to Facebook, some random person. The team-ups add another button on the bottom of the game screen as you run along, which you can use at any point to bring an AI-controlled second character in for a short time to blast enemies. Their arrival smashes blocks and pops pigs, too. And although it’s optional to use them or not, it isn’t optional to have the option - these levels won’t start unless you select a team-up. The levels aren’t really more difficult, so there doesn’t seem a real reason to force this upon players. 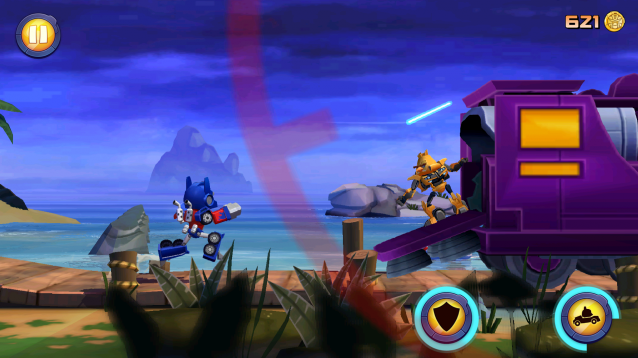 Ending on a good note, this is definitely a game a Transformers fan can enjoy. The opening cinematic is a call back to the original Transformers cartoon and the music is done by Vince DiCola, composer for my second favourite ever movie, Transformers The Movie. When you tap on the app, whilst it’s loading (which is only 10-15 seconds), it mentions lots of Transformers comic and cartoon easter eggs - Scraplets, Maccadams, Hailing Megatron, Metallikato…

This has obviously been made by fans of the robots in disguise. Sadly, it’s also been made by a company that knows how to monetize. Pay or wait, but you always have to watch an ad.

This has obviously been made by fans of the robots in disguise. Sadly, it’s also been made by a company that knows how to monetize. Pay or wait, but you always have to watch an ad.

I love this game..

Fun game but i havent played it for a while now

Transformers a big con. They force you to play a round of Angrybirds 2 everytime you go on. If you just get deliberately shot you lose and pay 600 coins to recharge and if you play to win and do win you get nothing even when you watch the promotional video to double. I know Angry Birds 2 is available so stop the making you play and make it optional. It's very annoying so makers please get your act together and less of the aggressive promotion