If splitting watermelons is something you enjoy, then you need to check out Dead or Alive Xtreme Venus Vacation's latest festival: Watermelon-Splitting Festival～Guided by the Wind～!

Marie gets a new swimsuit from the boss, but he tells her to do whatever she wants, so she lets the wind guide her on a walk. On the way she finds Luna, and they embark on a treasure hunt together, but Luna takes her to a peculiar spot...

As mentioned in our review, splitting watermelons gives you crystals, but now you can get pro watermelons which give you rarer items and crystals! After splitting five with a girl, you will unlock a new photoshoot episode for her. Just collect Golden Sea Breeze Hearts by winning volleyball matches, then exchange them for watermelons in the event shop.

You can increase the number of Golden Sea Breeze Hearts obtained by making your girls wear the Half Sail swimsuit. You can get it in the Trendy Gacha, and it's wearable by anyone except Fiona & Nagisa.

There's also the Star Outfit Gacha, which will let you get three outfits for Luna. Folklore, Bamboo Rake & Gym Uniform for Exploring. 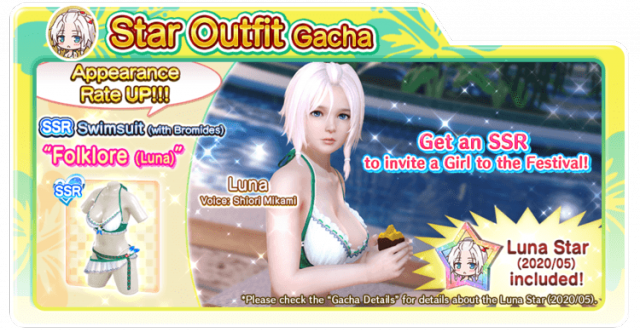 It's Nagisa's Birthday in Dead or Alive Xtreme Venus Vacation