The sad news broke today that the British computer pioneer Sir Clive Sinclair passed away at his London home this morning, having battled Cancer for over ten years. Sir Clive is widely acknowledged as one of the most influential figures in computing, having helped introduce the home computer as an affordable product suitable for homes with the ZX80, and later the ZX81 and ZX Spectrum computers.

The trailblazing engineer was awarded a knighthood in the 1983 honours list, as well as Honorary Doctor of Science degree by the University of Bath and was chairman of British Mensa from 1980 to 1997.

The success and affordability of Sinclair's computers was such that many industry veterans cut their teeth on the machines, many of them very young at the time and previously unable to afford the costly computer of the time. Notable alumni include X-Com and Phoenix Point developer Julian Gollop, Football Manager creator Kevin Toms,  and Earthworm Jim and Gakai creator David Perry. He is survived by two sons; Bartholomew and Crispin, his daughter Belinda, as well as five grandchildren and two great grandchildren. In addition though, he is survived by a wonderful legacy of bringing computing, and in turn gaming, within the reach of the masses. The thoughts and sympathies of all of us at GameGrin go to his family and loved ones.

It's a shame as a lot of the younger generation can't even name things he has done, till you tell them. 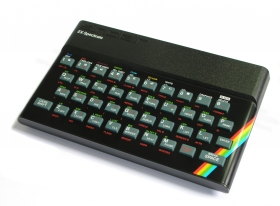