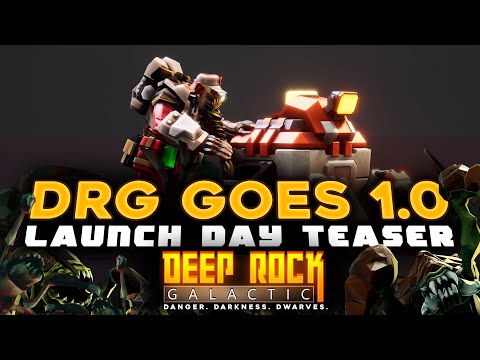 After a little over two years in Steam Early Access and Xbox's Preview program, the four-player, destruction-based shooter Deep Rock Galactic is nearing agonisingly close to its full release. Ghost Ship Games has confirmed that on 13th May, Deep Rock Galactic will fully release on both PC and Xbox One along with two new cosmetic DLC packs and an expanded in-game soundtrack. In addition, the 200+ fan-made launch trailers entered into the game's community competition are being showcased each day on the studio's various social channels, with the top 40 eligible for prizes.

Mining is a dangerous job no matter where it's done, but on Hoxxes IV, the risks are multiplied tenfold. Not only do the planet's dwarven miners have to face the typical dangers of cave-ins, volatile explosives and inhospitable environments on their mission for valuable minerals, but they must face an endless onslaught of alien foes too. Good thing these miners are armed with more than a pickaxe and some TNT.

Featuring procedurally-generated, fully-destructible levels, Deep Rock Galactic sees players, in their teams of four (or less) blasting, shooting and working together to fend off the alien hordes and secure the most valuable minerals. With four distinct classes, each boasting unique skills, weapons and equipment, players who work as a team will be at a serious advantage.

In its Early Access / Preview state, the game had been expanded with missions, weapons, enemies, game modes perks, assignments and more. There's little to fear for content-hungry players, however: as Ghost Ship Games states, the full release only marks "the end of the beginning". Updates and content will continue on through its launch and beyond.

Deep Rock Galactic launches on Steam, Xbox One and the Microsoft Store for Windows 10 on 13th May.