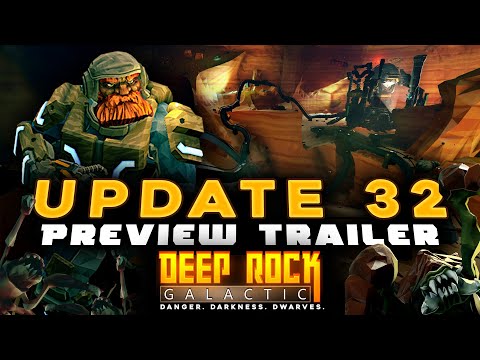 Update 32 is now live for Ghost Ship Games' Deep Rock Galactic on Xbox One and PC, bringing two new mission types, a suite of new cosmetics and a whole lot more. Check out the patch notes here and check out the update's trailer above.

This major content update is the game's first since its full release back in May, and Ghost Ship Games has an impressive changelog to show for it. Headlined by two new game modes, Escort Duty and On-Site Refining, the update also brings a new assignment, new cosmetics, some visual overhauls, quality-of-life changes and a mountain of bugfixes.

The first game mode, Escort Duty, involves protecting a 'drilldozer' as it seeks out a mysterious (and hopefully priceless) Ommoran Heartstone. As if it needs pointing out, "protecting" will involve lots of shooting and no small amount of smashing. The other game mode, On-Site Refining, involves collecting Liquid Morkite and sending them to the Morkite-thirsty management orbiting up above. Be sure to make use of the pipeline's dual purpose as a transportation system!

Update 32 for Deep Rock Galactic is out now for Xbox One and PC.