The latest update to hit Dauntless, the Infinite Radiance 1.6.0 update, has arrived and been quite divisive to the fanbase. It brought a new Behemoth type, new Hunt Pass, replaced the Vault with the Reward Cache, and added daily & weekly challenges.

It turns out that fans are not too keen on a number of changes, judging by the number of threads on the official subreddit that are against certain changes, if not the whole thing entirely. Some of the highlights:

The Reward Cache, which has replaced the Vault and its rotating cosmetics, now has two different currencies. Instead of Vault Coins, you now pay with both of the new currencies: Coins and Crystals. You get them from the daily and weekly challenges, and they expire at the end of each season (which is two Hunt Passes), so roughly 80 days.

If you want to buy everything from the Reward Cache, reddit user Karma_X_Kai has worked out that it will cost you 20,400 Ancient Coins and 5,200 Crystals. They further explained that you would need to complete every single daily and weekly challenge for over 40 days (the length of one Hunt Pass) to afford it. Most items in the Reward Cache cost both Ancient Coins and Crystals, but there are some items which only cost one or the other - and you can buy those items once every day.

Things are further exacerbated in players eyes, by the inclusion of a new subscription - the Slayers Club. For 300, 500 or 1,000 Platinum (premium currency), you can subscribe for three, five or 30 days. It gives you 100% more Ancient Coins and Crystals, 20% weapon XP and 25% more charged aether during Escalations.

The new Behemoth type has other players annoyed, because it is incredibly overpowered. Primal Behemoths are affected by Primal Suppression Pillars, meaning that they are immune to certain types of damage (or prevents you from healing) whilst the pillars are active. If a pillar is destroyed, it gets attack and speed buffs, but you can deal those types of damage (or heal).

Many players are dissatisfied by these changes, because Phoenix Labs has been slow at adding content, but seemingly quick at adding monetisation. There have been no new weapons since the 1.0.0 update in 2019, and new Behemoths are either at the end of Escalations, or reskins of existing ones.

Phoenix Labs has stated that they are listening to feedback, and will be addressing some of the concerns raised. However, users have been quick to state that Phoenix Labs says the same thing after every update.

Phoenix Labs have released a roadmap through the next few updates, taking us to 1.6.3 on 22nd of May. Whether or not they will be changing this in accordance with player feedback, however, we will have to see.

Dauntless is available on PC, PlayStation 4, Xbox One and Switch.

Dauntless Reforged - What's In The Game's Largest Ever Content Update? 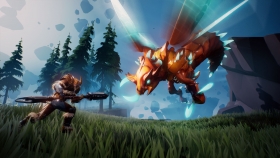