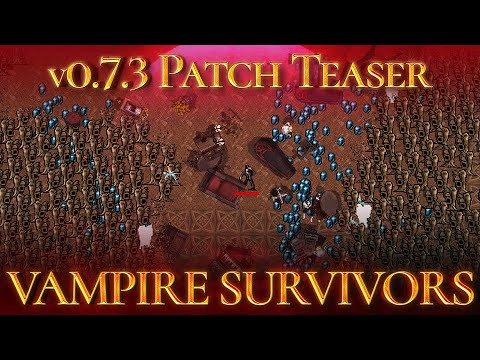 Vampire Survivors which is part of the Steam Early Access program has just released its latest patch. Patch 0.7.3 is nicknamed "The Posh one" and comes with a bunch of new content, but most notably a new character.

This new character is the last one in the collection of 24 fighters planned for the game, but it looks like we might see some more because the dev notes in their post in Steam "who am I kidding, there's no way I'm not adding a few more before version 1.0".

As well as the new character, the patch also includes:

Extra (not present on the roadmap):
- 1 Minor relic to change character appearance (where applicable) and maximum active weapons per run (fill 100 slots in the COLLECTION page to unlock)
- 1 Minor relic to show discovered unions and evolutions during a run (found in Inlaid Library)

Bugfixes:
- Tentative fix for standard saves not working on Steam Deck for some users

Vampire Survivors with its shiny posh new patch is available for you to try right now on Steam Early Access.