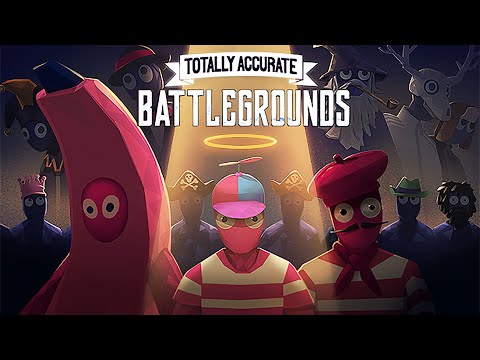 Independent developer Landfall yesterday announced, not as an April Fools joke, that its absurd battle royale title Totally Accurate Battlegrounds was going free-to-play with immediate effect, with a significant update to follow on the 19th April. The announcement was accompanied by a trailer, which you can watch at the top of this page.

The update will pack out the title with an in-game cosmetics store, a season pass offering free rewards and a paid battle pass offering 'premium' rewards. In addition, the game's Catchphrase system will see a major expansion. Players who paid for the game prior to going free will receive a tracksuit cosmetic, and when the major update releases later this month, they'll also receive a tracksuit weapon skin and 1,000 Money Coins (the equivalent of 6USD) to spend in the in-game store. Players who owned the title when it first launched for free in 2018 will get all the same rewards with the exception of the in-game currency.

Originally released as an April Fools joke in 2018, Totally Accurate Battlegrounds eventually took on a life on its own, releasing for real and gaining a sizeable playerbase. Now, as the game reaches its third anniversary, it's making another leap into legitimacy, going free-to-play with a season pass and battle pass monetisation system. For more information on the free-to-play version of the game, or the upcoming update, check out the Totally Accurate Battlegrounds Steam update page.

Totally Accurate Battlegrounds is now available for free on PC.

Totally Accurate Battlegrounds Releases and is Free for 100 Hours