Xbox’s Series X shaped mini-fridge will be available to pre-order starting from 19th October. The Xbox Series X Mini Fridge is priced at £89.99/ $99.99 and will start shipping in December.

Some details about the mini-fridge were shared in a press release: ‘The sleek matte-black tower holds up to 12 cans of your favorite beverage and has two shelves in the door, so you’ll be sure to have your favorite snacks at the ready.’ The mini-fridge also includes a USB port in the front and comes with a DC power cable. Microsoft is working with Target to bring the mini-fridge to US and Canada, and working with GAME to bring it to the UK. For Europe, they have partnered with multiple retailers which include GameStop EU, Micromania and Toynk.

What initially started as a meme when the Xbox series X was revealed has now been turned into a reality. Xbox is powering your memes along with your dreams! 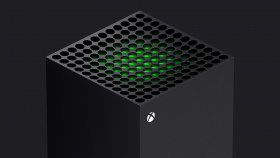