From the very beginnings of Elite Dangerous’ Kickstarter, being able to experience the universe from your avatar’s own two feet has been something “on the roadmap” although it was never guaranteed to make it into the final game. Some six and a bit years later and the newest expansion, Elite Dangerous: Odyssey, will finally let commanders stretch their legs and finally get out of those cockpits. 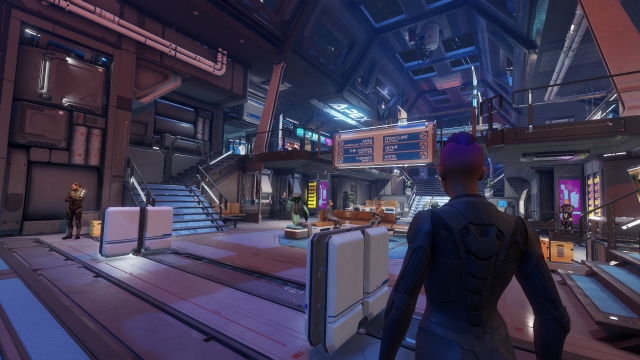 The Alpha for the expansion just wrapped up with the game’s official launch date being in a few weeks, on the 19th of May, so here are some thoughts on what the Odyssey Alpha showed us and my hopes for the final release.

Odyssey allows for commanders to finally leave their ships and buggies. Physically setting foot on existing landable planets (along with the addition of those with thin tenuous atmospheres) to experience and wander a variety of stations and outposts. Station interiors act as an on-foot hub of sorts, allowing you to take missions from new characters as well as the traditional (but redesigned) mission boards. 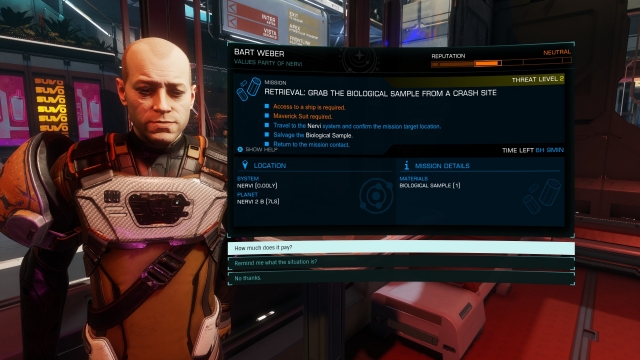 Interiors mostly provide access to services similar to what players are used to when in their ships but tailored to your new perspective, Pioneer Supplies provides weapons and armour; Inter Astra is the Shipyard equivalent enabling purchase and transfer of ships. Vista Genomics will pay you for any biological samples you scan on your travels.

Each of the Interiors available in the Alpha looked great and I can only hope there are more in the final release. They do a tremendous job of making the world of Elite feel like an actual place with holographic billboards, banners and propaganda making the previously dour locations come alive. It helps get the flavour of the world that David Braben and Frontier has cultivated over the last 25 years across in a more direct way than any in-game news article could. 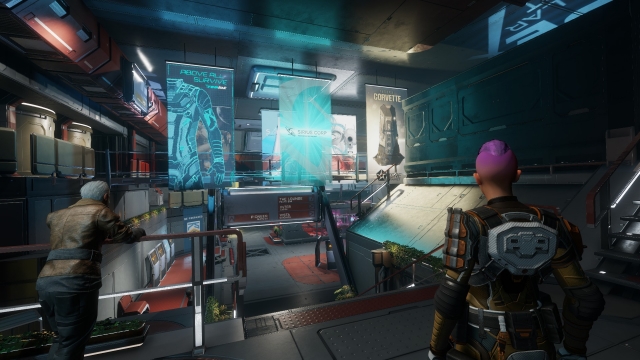 Elite Dangerous has, to some people, felt a little bland. Its visuals have always been stellar but the science-first focus felt like it pushed the world of Elite itself into the background and was never very visible in actual play. Characters, companies, the actual politics, conflicts and events were there but stuck in the background simulation and in Galnet articles and whilst the audio playback of those articles helped I think Odyssey’s biggest potential lies in exposing the actual world of Elite through these spaces.

Of course whether Frontier intends to leverage this potential in a dynamic way as events play out we’ll have to see. Having the interiors change as events in the galaxy shift feels like an easy way to get players invested in more of what is happening, and could even gently nudge towards activities they might not have tried before. Hopefully Frontier doesn't miss this opportunity and they’ve built it in such a way that this could happen.

The only real negative I have towards the station interiors is how we have no emotes or a quick and easy chat method. There are no interactive elements in the spaces themselves either. This seems like an odd omission when they have such potential as meeting spaces. No sitting on chairs or at tables, no ordering drinks from the bar, no waving to other commanders. Hopefully this stuff is on the roadmap for the future because the spaces themselves look great. 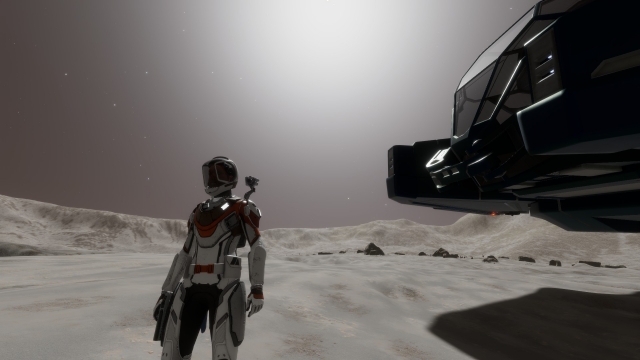 Two completely new services that aren’t just a variation on existing mechanics are the Apex Interstellar and Frontline Solutions counters. Apex Interstellar is essentially a space taxi service that enables you, at least in theory, to get around the galaxy without needing a ship of your own. The journeys are done in real time so there isn’t a benefit over using your own ship but it is certainly an interesting option, especially in the early game, and there are definitely situations where it could be useful.

Frontline Solutions is a new PvPvE option for jumping into some direct combat, when in a star system that is in a war state it will allow you to enlist for a side and get transported via dropship (again, in real time like Apex Interstellar) into a hot zone on a planet surface where you’ll be tasked with controlling a base by taking nodes and whittling down the opposing force, which will be made up of a mix of AI and other players assuming there are others in that system that have also enlisted. 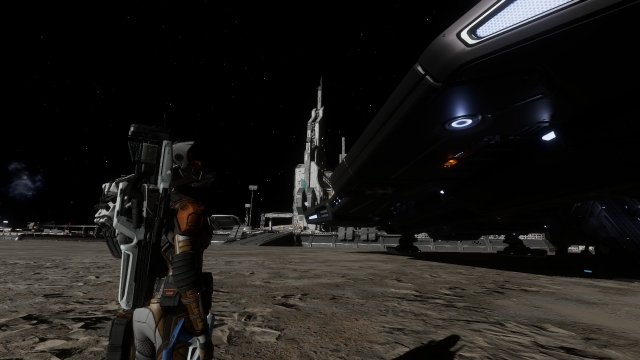 They are basically a ground-based variation on the Conflict Zones we’ve been able to take part in in space but there is definitely something more immediate about a ground tussle, it helps that ground combat feels good. The weapon types we could play with in the Alpha; Kinetic and Laser, both felt good with the mechanics of ship combat transferring well to ground level. Laser being better at depleting shields then transitioning to kinetic to rip through armour.

How these play out on release once we have access to all weapon types is still to be seen but what was in the Alpha was a lot of fun. There was a lot of weapon switching because of how you are required to focus on using the correct type of damage which made it feel clunkier than say your Call of Dutys or Battlefields but it had its own unique feel which is refreshing. 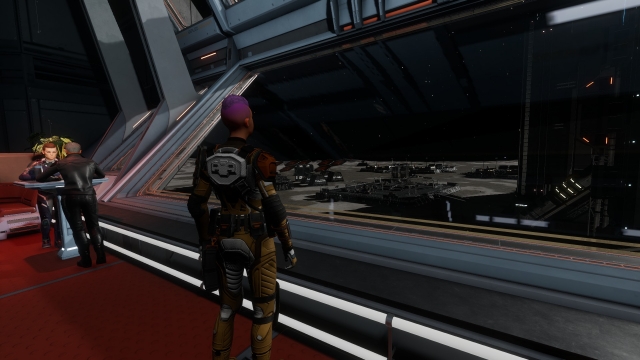 The main draw of the expansion is the ability to get out of your ship and with that comes the addition of a whole gamut of new mechanics and gameplay opportunities. Your on-foot self can purchase and wear a variety of suits that each have a unique piece of equipment or perk. The Maverick suit for example allows you to use an Arc Cutter to cut off access panels, whilst the Artemis suit provides the exploration-minded player with the Genetic Sampler for collecting… genetic samples from the new life you’ll find across the galaxy.

One feature that you won’t be enjoying with your new found bipedal locomotion is walking around your ships, getting in and out of your ships is via a blue transport ring which is a little disappointing from an immersion perspective but from a time investment one is totally understandable as outside of flavour there wouldn’t really be much point right now. Maybe one day though!

New missions are available from the redesigned mission boards, and range from powering up abandoned settlements, recovering someone’s datapad they left in a habitat building 20 LY away to wiping out an enemy faction who have decided to squat at a chemical production facility. To Frontier’s credit they’ve managed to work a few basic elements (power up, turn off, retrieve an item and murder someone) into a varied selection of mission types which all have their own quirks. There are often multiple ways of accomplishing a task and you can even perform stealth takedowns if you want to take a non-lethal approach. 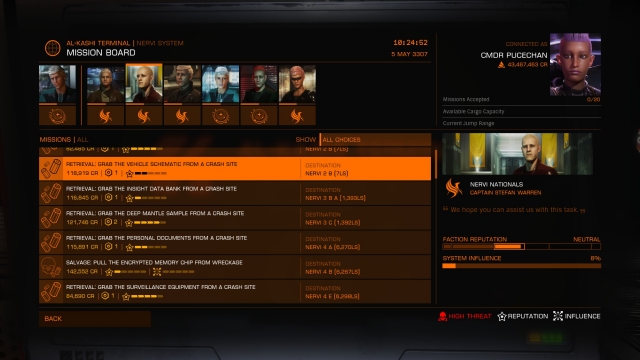 Settlements themselves are a lot more interesting than the variants we had in Horizons as well. Odyssey’s are split into distinct building types that house different facilities. For example Security and Ops buildings often house the alarm and turret controls for the location and require you to have acquired level three access to enter.

They are a great change of pace to doing space-based fare and are a lot more enjoyable than the equivalent SRV buggy missions Horizons added. The difficulty Frontier has is in balancing the rewards for doing these so it’s worthwhile even doing them as in general they are a lot more involved and have a lot more points of failure than in most space missions for example.

Contributions to the exploration side of the game are a little lighter, at least as far as we’ve seen in the Alpha. Commanders can now scan planets and get a visual heat map of where basic life forms are located. They can scan them with the Genetic Sampler and turn in their discoveries for a cash reward in much the same way as you’d scan planets. Frontier have said that what was in the Alpha wasn’t everything that was coming in Odyssey so hopefully there is more for explorers as it does kind of feel like they don’t have much to be excited about. 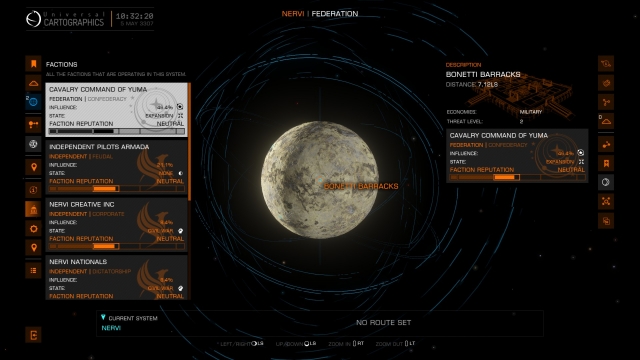 Other noteworthy additions include an overhaul of the user interface across the whole game. The System and Galaxy map especially seeing major changes that expectedly split the player base over whether they are an improvement or not. Personally I quite like the cleaner, more segmented design although it does feel like it takes more clicks and button presses to see information that was upfront before, instead being separated out into individual panels.

Planetary terrain is also receiving a massive update and whilst some of the tentative changes made it into the Alpha, like slight haze on tenuous atmosphere planets, the full extent of these changes is being held back until release. It will definitely be interesting to see what the expansion looks like on day one.

There are definitely concerns raised during the Alpha that we will have to see if they are resolved come release day, performance was the primary concern as PC configurations that could easily run Elite Dangerous: Horizons on Ultra settings were seeing framerate dips into the low teens. Crucially Frontier had said from the very beginning of the Alpha that optimisation wasn’t active during these builds and have commented that players should expect similar performance to Horizons on the same setups. 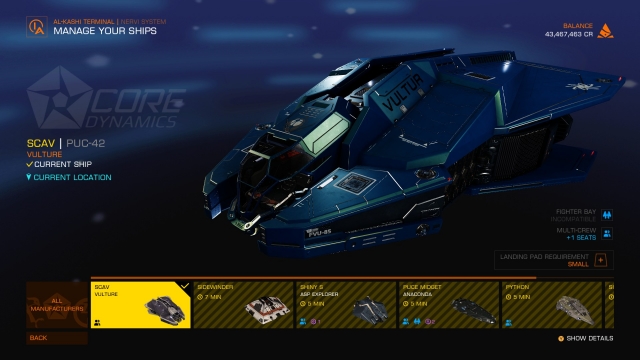 The amount of grind seemingly required for upgrading your weapons and suits was also a sticking point; we'll have to see how it ends up. A lot of the balancing side of things was extremely lopsided so hopefully that’s just due to the nature of these builds and will be resolved come the 19th of May.

There are some other quirks and bugs that have persisted throughout Alpha that will also hopefully be resolved. From issues with all missions in your log failing instead of just the one you were on to the noticeable changes in ship livery colours due to the lighting changes.

All in all, there are a lot of wonderful and interesting ideas in Elite Dangerous: Odyssey and I’m excited to see how the final release shakes out in a few weeks. The scale and scope of Elite Dangerous has always been intimidating but hopefully the addition of human level activities can energise the dev team to expand on existing and new mechanics from both Odyssey and the base game going forward.