If you’ve ever read any of my Europa Universalis IV or Crusader Kings II articles, you’ll know that I’m a desperately huge fan of Paradox grand strategy games. They’re fantastic, and that’s all I’ll say because I’ve said so very much before. Yet there’s one series that I’ve yet to actually play, and in many ways it’s the series that suits me and my interests best. Hearts of Iron is undoubtedly Paradox’s most complicated grand strategy series; the tight WW2 timeframe and combat focus have previously made it less approachable than the likes of Victoria or Europa Universalis. Over the past few years, however, the Paradox dev team have striven to make their games more accessible (and ultimately more fun), and Hearts of Iron IV is following suit.

Paradox has made changes across the board in an effort to make the game easier to digest, but the key difference between HOIIV and previous games is a user interface that’s far more clear and user-friendly. That covers a lot of different aspects of the game (grand strategy games are, after all, one big user interface), but arguably the most important change is the new world map. With the ever-wonderful Clausewitz engine supporting it all, HOIIV’s map is, in my opinion, the best map ever to come from a grand strategy game. That doesn’t just mean pretty weather effects and realistic unit models, however, it means a great combination of visual effect and player assistance. 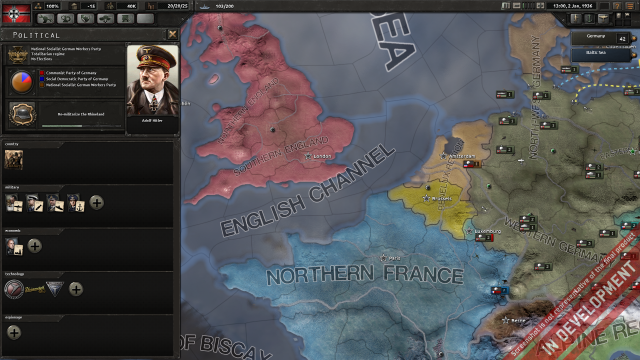 While we’ve all become accustomed to scrolling through different map modes to garner certain information, there’s no doubt that it’d be a lot more convenient to have one map view that summarises lots of info. That’s one key aim in HOIIV: to have a ‘master mapmode’ that covers everything from national boundaries to economics, all with the attractive terrain overlay. This could be the first Paradox strategy game that doesn’t rely on the political mapmode, thereby looking like a four year old’s colouring book. Playing in the terrain view could actually be practical. These changes may seem small at first appearence, but they’re sure to go a long way to helping new players truly understand the game they’re playing.

It doesn’t stop there either: an intriguing Battleplan system is being incorporated into HOIIV, which should make battles and war in general both easier to understand and more fun to instigate. While you can still micromanage each individual unit during a battle (as per previous games in the series) you’ll now also have the option to form a battleplan with which you literally draw on the map to decide where your troops will defend and attack. Want a defensive line across western USSR to prevent a German attack, just draw it on and your troops will form into the best defensive positions possible. Plus, when you’re attacking a nation, Poland as Germany for example, you simply draw on the attack direction with a certain number of units/battalions, then hit ‘go’ when you want to launch the attack. There’s a risk of oversimplification here, but based on what I’ve seen so far, it looks to be a fun and intuitive new system. 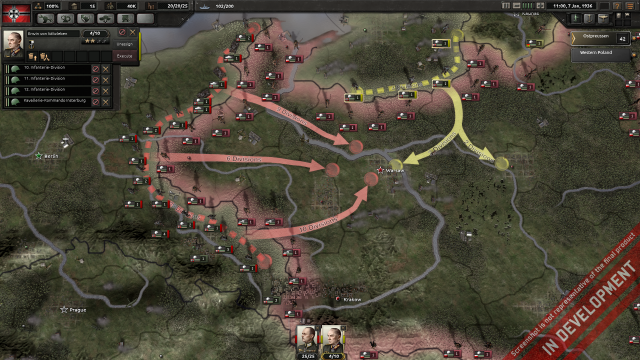 Of course, there’s a chance you’re reading this as a longtime fan of the series, probably worrying that Paradox is making the new game too user-friendly. After all, part of the appeal of grand strategy is the difficulty. Well fear not, if CKII and EUIV have taught us anything, it’s that the Paradox developers know how to make their games both interesting for newcomers and incredibly deep for those who are committed to the series or the game. HOIIV is looking to follow that rule with a whole bunch of changes and additions that series fans can look forward to. A whole new economic system based around production lines has been created in an effort to better reflect the balance between quantity and quality.

In effect, you can adopt the Russian model and task a large majority of your factories with creating one type of tank/plane/vehicle. Over time they’ll become more and more efficient until they can churn out ridiculous numbers on a regular basis, but of course this means you’ll be bringing older model units into battle. On the other hand you can follow the German model and simply update your military hardware with each new technological breakthrough. Your factories won’t specialise over time and you won’t have the large numbers, but you will have technological superiority. Obviously you don’t have to choose one of these two extremes, your technology and production strategy is entirely up to you. 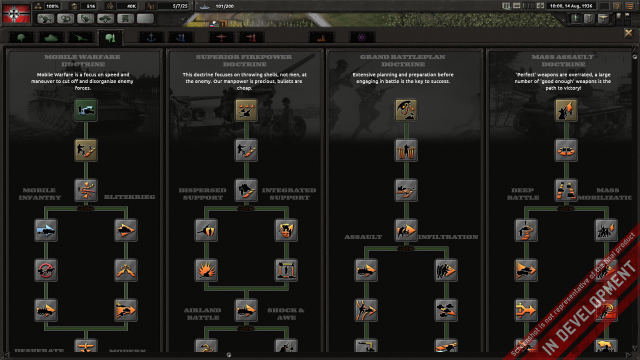 Supporting this new economic system (which, by the way, goes a lot deeper than I could ever explain) is an overhauled technology mechanic that not only features an increased number of overall techs within the specific unit trees (armour, planes, ships etc), but a cool system with which you unlock vehicle models then research sub-technologies for these. So you can improve a specific unit’s reliability, but this may have a negative impact on speed or firepower. Plus, an entirely new doctrine mechanic lets you model your army on real-life super powers of WW2, with each doctrine bringing certain bonuses to your army. The Mobile Warfare doctrine, for example, is modelled after the Germans and affords your units improved maneuverability. While Superior Firepower, in American form, is all about using superior weapons in an effort to save human lives.

Once again, it all goes a lot deeper than that, so rest assured that Paradox has gone to town to ensure that series fans have new things to play around with. In fact, those who have experience with the likes of EU and CK will find some new mechanics that are inspired by the more successful elements of those games. National and political goals are very similar to the mission mechanic from EUIV, giving players small targets to work on during a certain period of time on top of the overarching goal of victory in the war. Not only this, but nation specific goals make playing as each superpower a unique experience. 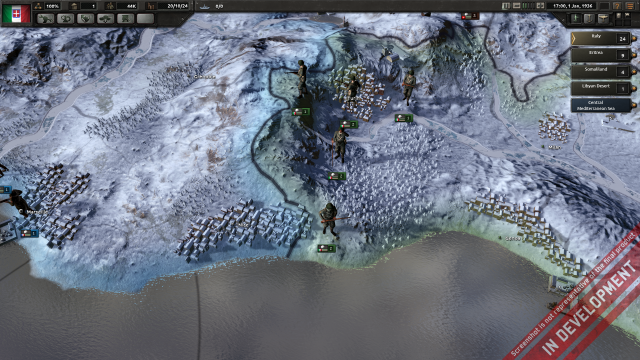 In fact, this is something Paradox has worked on across the board. During their presentation, the developers conceded that in past HOI games the nations have been too similar. In HOIIV the powers play very differently based on location, goals, technology and various other small changes. Of course, these elements were all present in previous titles, but never before have they impacted the gameplay so severely. HOI has always been a game with plenty of strategic choices, but this time it really looks as though the choices players make will be important and the changes they make to the world obvious and satisfying.

I left my Hearts of Iron IV gamescom preview session wholly impressed with Paradox’s newest grand strategy game. The Swedish team are enjoying something of a golden age at the moment, bolstered by increasingly accessible yet (dare I say) paradoxically challenging video games that seem to be both appeasing long time fans and attracting plenty of new followers to the cause (myself obviously included). HOIIV looks to be the culmination of this newfound success, and for Paradox it could be the game to really break through the ‘niche’ boundaries of the past. People love WW2 as a setting, both gamers and history buffs, so combine that endlessly interesting time period with the ever-fantastic modern Paradox grand strategy mechanics and you’ve got a game that’s difficult not to get excited over. The worse thing about the whole situation is that we have to wait until Q1 of next year to play it. Synchronize watches folks, this should be a doozy.