You’re zooming through the ever-changing universe, minding your own business when bam! You run out of fuel. Luckily for you, your ship has hit empty whilst over an alien planet so you decide to beam down to see what’s what and find some fuel.

This is where things kick off for you in Starbound, the latest project to come out of UK-based indie studio, Chucklefish. You pick your character’s race from a list of six and off you trot, down to the alien planet via your teleportation pad.

You’re supplied with a set of tools to begin with which are some placeable torches, basic seeds, a sword, a flashlight and a Matter Manipulator. This last one is used for placing objects and harvesting materials from your environment. Once on the surface of the planet, you’ve got two jobs, one of which you will most surely fail at. First off, you need to find fuel for you ship in the form of coal. Don’t ask me why an intergalactic spaceship is fueled by coal, it just is. Second, you need to survive. This is the one that you will most definitely fail at, especially as you’re learning the ropes of Starbound. 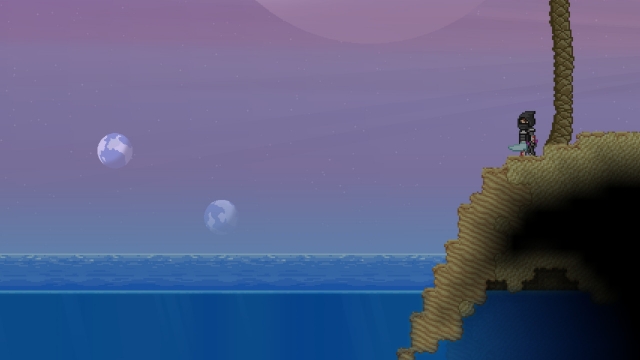 See, there’s three types of aliens on this planet. Those who want to eat you, those who want to snuggle up under your favorite winter coat and be friends; and you. The thing is, you can’t really tell the good aliens from the bad aliens until you’re within eye gouging distance, so you either take a gamble and try your luck, or just dismember everything that moves - including the fish.

Now, you’ve had your fill of killing alien variations for the day and it’s getting dark. You’ve realised that you’re without shelter and a red bar has appeared at the bottom of your screen. This bar is your temperature and when it runs out, you’re going to have a bad time. Therefore, you must create - nay, build - something that will keep you warm, and for this, you need to use your Matter Manipulator.

By destroying your environment, you can collect materials such as wood, stone, dirt, etc. and use these to create a shelter. Alternatively, if you’re not that primitive, you can use these materials to craft things. The crafting menu unlocks a multitude of potential options for shelter and survival, starting out with the basic mining tools and wooden planks, ranging to the extreme robot drills and ‘Impervium’ armour. But let’s not get ahead of ourselves. 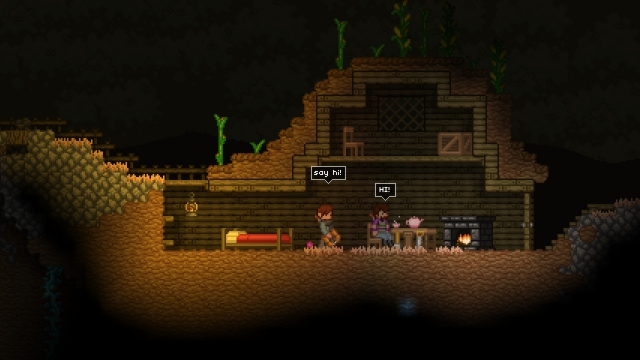 First off, you build a crafting table, some wooden planks and a campfire. From here, you can build up your basic shelter that, later on, you can develop into a structure the gods themselves would fear. Now is when you realise that your time fighting aliens has left you bruised and battered. Your health is low and your hunger is high. Luckily for you, half your problems can be solved by simply having a nap.

Sleeping regenerates your health (or recharges your batteries, if you decided to play as the The Glitch race) and allows you to keep fighting for another day. There’s plenty of options for sleeping including tents and bunks, but to start with, you’ll probably want to opt for the plain and simple bed.

Now you’re fully refreshed, your next challenge is food. Again, luckily for you, your time slaying monsters left you with a horde of alien meat. You can throw this into the campfire you made earlier and it will cook it just how you like it.

You’re back to your old self but it’s dark outside. It’s probably not a wise idea to venture into the unknown when you’re this ill equipped. Instead, you opt for digging down to the depths of the planet in search of resources. These resources will come in the shape of ore. The deeper you go, the better stuff you’ll find (usually). 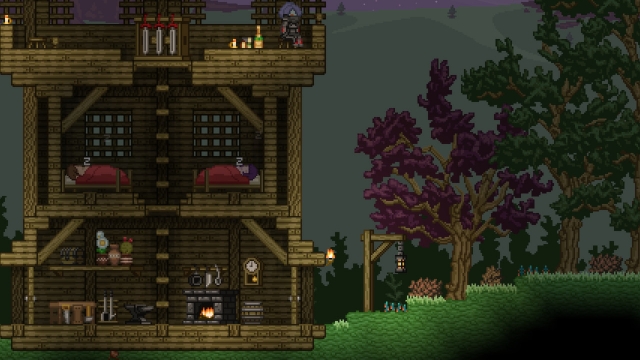 Whilst happily collecting away, you stumble upon an underground sewer system and go exploring. These structures are the bread and butter of Starbound and what really kept me going. The game is about exploring and these discoveries are the pièce de résistance. There are tons of places for you to find such as penal colonies filled with escaped prisoners, Egyptian treasure troves, sewer systems filled with shit demons (no, really) and many more. Not all of these places are hostile, and some will even have NPCs there to trade your wares with.

A lot of what is held within these places cannot be found/crafted elsewhere such as radiators, computers, barbed wire and security cameras. This means that it’s in your best interest to get pillaging and take everything you desire from these places to improve your own base.

Once you’ve collected your fill, you can teleport back to your ship and put these discovered treasures into your 3D Printer. This destroys the item but means that you can then create it again using Pixels, the in-game currency. The entire game revolves around these pixels and you want to collect as many as possible. They can be collected from pods all around the alien planets, killing aliens, or completing quests. You can also get them from selling wares to the previously mentioned NPC merchants. When you’ve done your fill of 3D printing, it’s back down to the planet’s surface to deal with your first objective - find fuel so you can leave the planet. It’s not that easy of a task to find much coal on your first planet, and it can be a bit tedious, but stick with it. Once you’ve got about 100 pieces, you can jet off to another planet using your ship. Each planet has it’s own biome which tells you what the environment will be like. They also have their own level. The higher the level, the more difficult it is to survive.

As mentioned earlier, Starbound is a game about exploration - the advancement of technology is merely a side product of that. My grandma used to always tell me “if you ever run out of fuel above an alien planet and decide to go exploring, always go with friends!”. She was a bit senile at the time, but now I understand what she meant, because you can take your offline character online seamlessly. This means that you can continue your adventures with friends!

All in all, Starbound is a fantastic game and definitely one to keep an eye on as it furthers its development. One thing to take note of is that, because it’s still in development, there are often character wipes. Try to see this less of a setback and more of a chance to adventure some more! So, what are you waiting for? Get in your ship and begin your journey of exploration!

Starbound gets Another Major Patch

Return to the Lost Levels of So I Tried…