I was just going through my phone before bed (like most do these days) when I noticed my friend posted a link to a website about a game on Discord. I clicked it expecting some images, some info about the game and maybe a link to a crowdfunding campaign. If there was an actually playable version of the game I was sure I would have to wait till the morning to check it out.

However to my surprise my screen told me to rotate my phone horizontally. Appearing from nothing almost as if it had been divinely placed there… a full game. 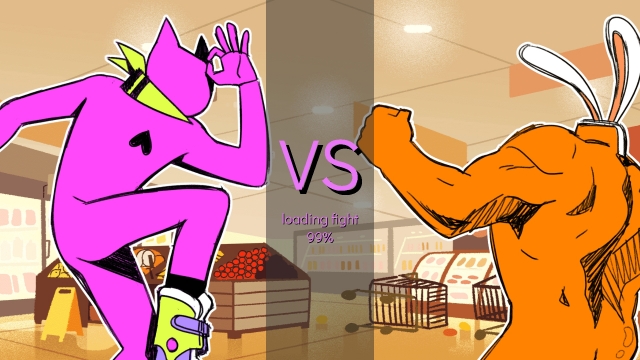 I was aware of browser and mobile-based fighting games before, but what made this one special was how quickly I was in the fray of combat. I have never gone from clicking a link to fighting people online so fast. The game also feels so complete that I could easily imagine it being sold on Steam and having a lot of positive feedback on there. And lastly, the game has rollback netcode which makes online matches smoother.

Right away the game welcomes you with a colourful title screen with six quirky-looking characters. Following an EULA and a tutorial screen, there is a menu screen accompanied by slow, funky background music evoking 8bit/16bit game tunes.

While the menu buttons look like basic placeholders all of them function and lead to everything a fighting game needs. There is a comprehensive How To Play section including playable tutorials on all the game’s mechanics as well as character guides and combo trials. There is online play allowing for automatic matchmaking as well as a private match option where you can easily play against a friend, but without a lobby unfortunately. For offline play there is local multiplayer versus, versus CPU and training. There is also an Extras menu with replays and character frame data among others. 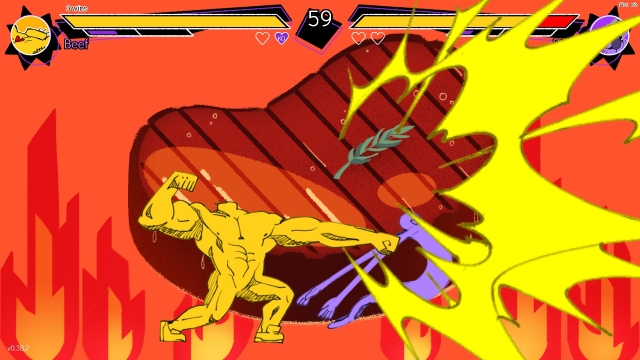 Currently the roster features six characters evenly split up among three fighting game archetypes of zoner, grappler and rushdown. The characters of the same archetype share the same basic model and moves but each individual one has their unique abilities. The fighting itself requires only five buttons to control with all the move commands being a combination of a button and direction or multiple button presses. After playing a match you can instantly grab a link to a replay.

Visually the game is quirky and colourful with some resemblance to CalArts (Adventure Time, Amazing World of Gumball) but more rough and sketch-like. The characters are rendered with sketchy lines and block colours. They are animated very well with strong, easy to read keyframes conveying the speed and strength of their attacks on par with the likes of BlazBlue or Guilty Gear. The stages have a good amount of detail mostly made using block colours without any linework. One of the stages is literally a notebook page with lines and some doodles working as Tough Love Arena’s version of the training stage.

The game’s sound design meshes very well with the art. All of the sound effects seem to be mouth sounds and perfectly compliment the game’s visuals. Similarly to the main menu the stage music is quite funky and retro but appropriately faster and more energetic. There are currently four stages and each has a different music track. 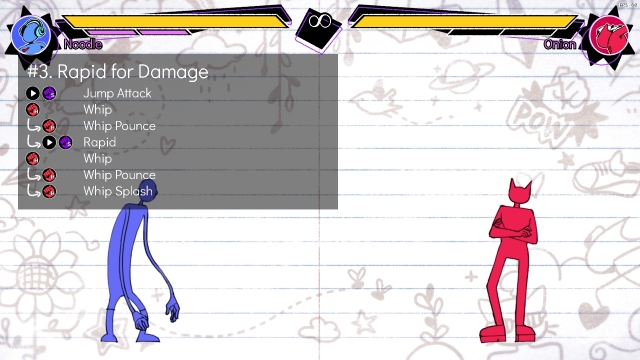 There are some areas of the game that seem like placeholders and will likely change in the future. However, the way the game looks and sounds already seems quite intentional and has a unique charm. There is no doubt in my mind that the game will get plenty of support and keep getting better.

In summary Tough Love Arena is very well done, easy to access and a lot of fun. Because of it, competitive fighting is possible even if you are away from home and can’t use your console/PC. Or you can fight people online during a break. If you find the game interesting you can play it on it’s official website. It also has a Twitter and a Patreon.