The world belongs to the humans, and it is up to you — and a party of up to four other vampires — to reclaim Earth for the superior species. Use your vampiric powers to fight foes, kill V Blood enemies to gain their unique abilities, and hide from the perilous Sun until you can make your ancestors — Dracula in my case because I am not creative and I love him — proud.

V Rising takes no breaks between you hitting play and finding a suitable server, and throwing you straight into gameplay — an extensive character creator that allowed me to make anything from the cutest yet fiercest vampire to the ugliest monstrosity known to man, and everything in between. Aside from the unsightly males with their overgrown necks, I really enjoyed the character creator, but I was disappointed to see that the camera was much too far away for me to admire my grotesque vampire. Although the distance didn't allow me to appreciate my character like I wanted, it worked perfectly for gameplay, and that's what V Rising most excels at.

Getting thrown into the world, you'll soon understand three things without the need for a tutorial: you can attack with your claws, which destroy environmental objects and foes alike; there are two health bars, one of which dictates which kind of blood you have (we'll get to that later); and the Sun burns... a LOT. Entering the V Rising server, I was unfortunate enough to stumble upon the sunlight a bit too early and got reminded of vampire rule #1: avoid the Sun at all costs. 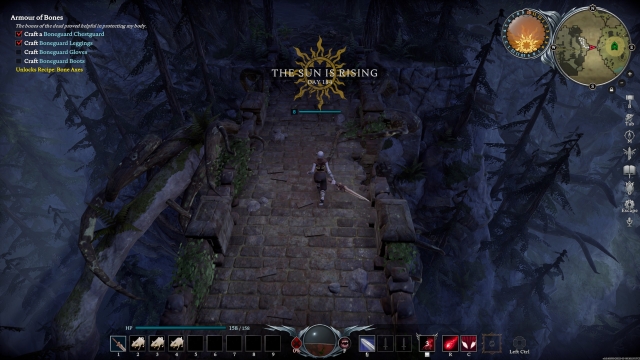 V Rising has a day/night cycle that dictates how long you can be outside hunting and when you'll have to hide in the shadows... literally. Running amok in the hours of the morn will net you a burn that will sooner turn you to ashes than give you a suitable tan for that skin that has been whitened throughout centuries of being in a coffin. Earth's time is a bit skewed when it comes to V Rising, but I thought it a fair and necessary balance to make gameplay enjoyable, as you'll soon notice that there are only nine hours of daytime and 15 hours of nighttime, wonderfully suited for the perfect nocturnal hunters that the vampires are.

Throughout the daytime, you'll spend your time inside of your castle — or glorified castle in the first few hours of gameplay — not only hissing at the windows but also decorating and preparing for what you will do once nighttime hits. Inside (or outside, for daredevil vampires), you will find a sawmill, furnace, workbench, and numerous other production buildings that will allow you to craft a myriad of things that will accompany you into the night. Ranging from weapons for killing your enemies with and armour for ensuring your survival, you will spend most of your daytime crafting these. Although the prospect of being stuck inside your den in the daytime might sound boring, it passes by sufficiently quickly, and oftentimes I found myself needing just a bit more time to prepare my things before heading out on my hunts, or just getting stuck admiring my castle, dumbfounded by the game's gorgeous graphics.

Once I'd finally left my megalomaniac daze of relishing in owning a castle, I could jump into the night. Before I could wreak havoc upon my enemies, however, I first needed to ensure that my Blood Pool was sufficiently filled, lest I face death. In V Rising, you have two bars that seem to be health bars, but you'll soon realise these are your health and hunger meters. Should your Blood Pool become empty, your life will swiftly decay, much like a vampire does without feasting. Although the mechanic of food isn't the most innovative thing to come to the genre, the blood types and quality are. 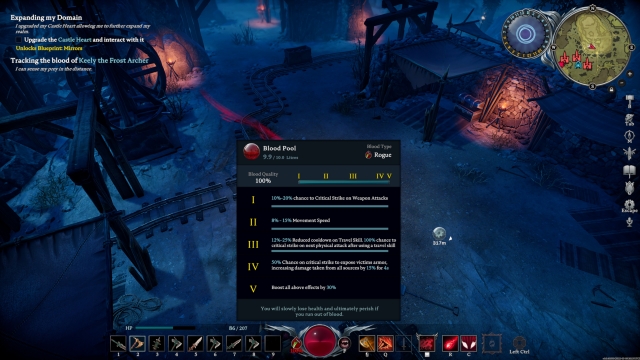 You see, every living creature that has blood running through its veins has a "blood type" that you can use to your advantage. While Bambi has Creature blood that increases your movement speed, sun resistance, damage reduction, and health regeneration, other types of blood will give you different benefits. Workers facilitate resource gathering to make your almighty castle of evil doom bigger, Rogue blood will allow for extra damage throughout some encounters, while Warrior blood will — you guessed it — make you a better fighter. This, paired with a very fun system where each blood has a different level of quality (ranging from 1–100%) that determines how strong it is and which perks it provides, made for a very enjoyable and varied experience while playing through V Rising. If I had certain blood at a certain strength, I tailored what I could do with it instead of brute-forcing my way into a certain task, and it is some of the most fun I've had in survival games in a while.

Combat-wise, V Rising is incredibly enjoyable; you have numerous abilities to use and choose from that each tailored to different builds. With 28 abilities spread throughout five skill trees and 10 ultimate abilities to unlock, it doesn't feel like any vampire is the same unless you wield the same weapons and attacks. To unlock each attack — and your main form of progression overall — you'll need to interact with the Blood Altar you create early on in your playthrough that leads you to numerous bosses, each with unique abilities and droppable items that you can benefit from. This system of progression was incredibly fun, as following the blood trail to find a V Blood enemy (the name of the bosses) was exhilarating, but not more so than knowing I'd unlock something great after defeating it.

Combat feels fast-paced and fun, though enemies often utilise only a small pool of attacks that become predictable over time and make it extremely easy. Often, your biggest threat will be hordes of enemies rather than one singular boss, so you'll have to use your skills to dwindle their numbers until you can finally kill the main bad guy. Despite the simplicity of the AI, however, V Rising has an optional PvP mode that lets you fight against other vampires to claim the lands for yourself. Fast-paced and incredibly tricky, you'll have to face rogue vampires that hide while you fight a boss and kill you when you're weak or duelists that seek challenge everywhere. None are as perilous, however, as the vampires that run in clans. 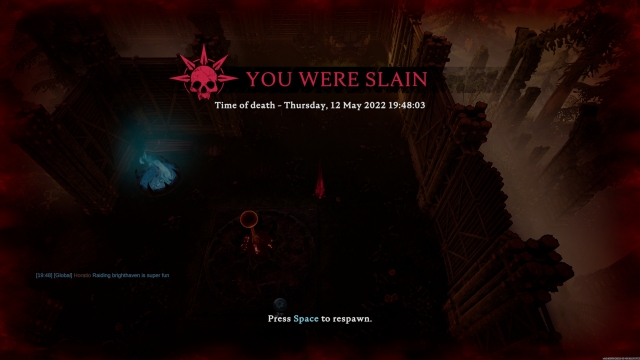 Throughout my run, I met a lovely pair of players that ambushed me and killed me when I was underleveled (i.e. had weaker gear than them, as V Rising equates your gear level as your level overall). Dejected by the defeat, I returned to my castle and found all of the items I was carrying understandably taken by them. I saw about an hour of hard work dissipate before my eyes at the hands of two hunters. Although I wasn't upset, it sparked a fear that was later confirmed: vampire clans might often rule PvP servers. Time and time again, it seemed like this notorious duo killed players that complained in global chat, and the unfortunate victims seemingly had no opportunity to retaliate. Putting it simply, the numerous spells that are meant to lock down a target to feast on them can be used in synchronicity to force you to stand still, taking damage to no avail. Keeping in mind this dynamic duo wreaked so much havoc upon the weak lone-vamps, I fear to see what lies in store for those that face four-player clans dominating servers if V Rising doesn't fix this potential issue.

Did the ganking deter me from V Rising? Absolutely not. Not only is PvP completely optional, seeing as you'll be able to select from PvP, PvE, Full Loot PvP, Solo PvP, and Duo PvP servers, but it was also an enjoyable experience. Although PvP might be frustrating if you don't have a clan to back you up, it being optional felt fantastic, as I knew I could jump into a PvP server and enjoy it any time I wanted.

V Rising is turning out to be one of my favourite releases this year, and I can't wait to be able to experience more of it. Aside from the potential ganking in PvP (which has numerous fixes regardless with all of the aforementioned game modes), every element felt well thought out, and I have full faith that subsequent updates will only add more enjoyable aspects to it.

What Are Blood Types and Qualities in V Rising?

What Are the Modes & Server Customisation Options in V Rising?

Is the Sun Burning Mechanic Annoying in V Rising?