Developer Fatshark has been eager to keep the attention of fans of Warhammer: Vermintide 2 with a steady stream of free updates, content packs, and new subclasses. The most recent in this is Chaos Wastes, a free update that adds new mechanics, potions, and locations, presenting them in a new style reminiscent of the forking-level choices of classic arcade racers like OutRun, mixed with roguelike elements, all neatly wrapped up in the familiar four-player co-op gameplay that we’ve come to love.

The Chaos Wastes DLC introduces us to the aptly named Chaos Wastes, a twisting path that leads to The Citadel of Eternity, which is what our band of heroes hope to find. The Chaos Wastes sports 15 new locations for players to traverse, some of which are amalgams of standard campaign levels, others of which are totally new. As well as this, some levels will be cursed by the Chaos Gods and will be subject to interesting modifiers, such as enemies dropping explosive skull totems, or splitting into multiple smaller enemies on defeat. The paths you take on these levels themselves can be different with each run-through, as previously accessible areas will be covered up to make way for a different route on the same level. Among the Chaos Wastes, you’ll find ways to upgrade and exchange your equipment, obtain new buffs, and even have access to a wide variety of new potions to play with, ranging from lifesteal potions to poison resistance. 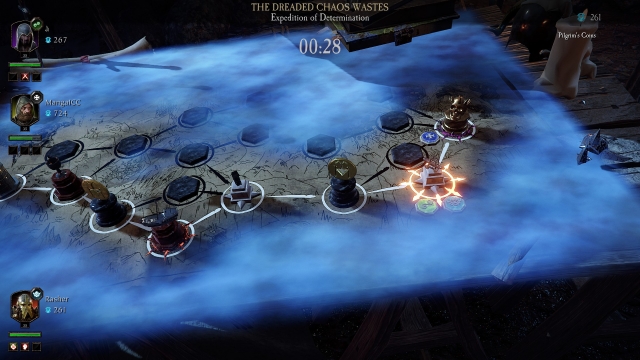 A problem with the base game of Vermintide 2 for veteran players is, after a while, the gameplay is all the same. Once you’ve peaked your power level (650) and have your preferred equipment with the best traits/properties, there isn’t much more to do in the game besides play the same old levels again. Chaos Wastes looks to change that with a variety of game features that plan to add a massive chunk of longevity to a game that, in its defence, already has quite a lot.

Every run through the Chaos Wastes will be different. Instead of your powerful starting items, you’ll begin with grey variants of your equipment and can either upgrade your weapons or purchase new ones at various points throughout the levels using Pilgrim Coins. Changing your weapon is random but will give you a weapon with greater power (able to exceed the typical 300 power cap on items) and rarity than you could achieve at this point through upgrading. This can cripple some classes, such as if your Shade Kerillian who specialises in boss killing suddenly finds herself with a spear rather than dual daggers, so it becomes a gamble of trying to roll a better weapon, or sticking with what you have and hoping you find an upgrade station. Pilgrim Coins can also be used to purchase Boons & Miracles throughout the levels, which are small perks that can give you a random buff ranging from health regeneration, to increased damage when under a certain health threshold. Finally, completing each level rewards your whole team with a buff, ranging from a health increase, higher critical strike chance, or reduced block cost. Sometimes planning out which buffs you want will be the deciding factor in which route you decide to take. 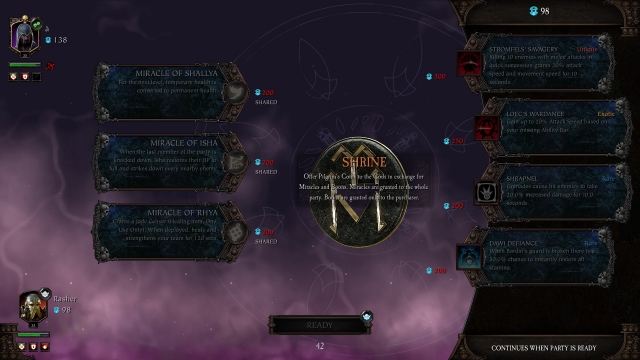 Everything about how the levels in Chaos Wastes play out is typical of a roguelike, and it’s refreshing to see elements of the genre in an atypical format done effectively. Backing out when you’re part way across the map will end your progress, as will dying, so make sure you have a few hours spare before attempting to do this. As of yet, I have not reached the end — A friend and I managed to make it to the Citadel itself, but we died on the last level thanks to a particularly nasty curse that had us all sharing the damage we took. The most recent DLCs have generally been met with a mixed response, but Chaos Wastes is looking to be an incredibly refreshing breath of air into Vermintide 2, especially with it being a free DLC. It takes what is great about the game and puts it into a highly replayable roguelike style that is guaranteed to have players coming back again and again.