It seems that with games like Rogue Legacy, Super Meat Boy, and Dark Souls, gamers sure do like to break their keyboards a lot. These are the type that have you dying over and over again, all because you made one tiny mistake. It can be the most aggravating yet satisfying feeling to finally beat one of those levels that you’ve been stuck at for triple the amount of time you were taking for previous levels. The game is like flogging yourself over and over again, trying to see how much punishment you can take. Those that like these kind of punishing constraints will certainly like 10 Second Ninja X for what it has to offer. 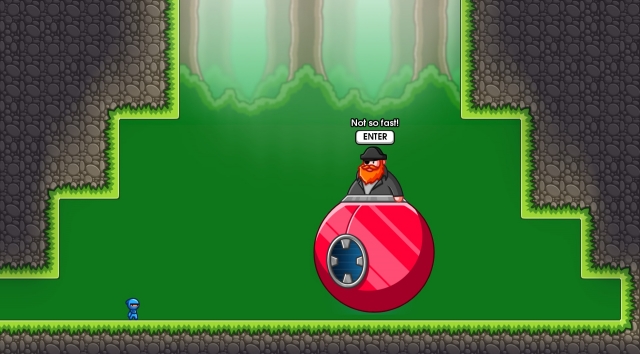 You are a legendary ninja assassin who has been abducted by a crazy pirate named Captain Greatbeard, not exactly a creative pirate name but hey, sometimes sticking to generic names can work. Now Greatbeard has turned his giant flying ship into a tortuous maze that has a series of challenging levels for you to complete. Each level consists of various platforms that have robots sitting on them that must all be destroyed in order for the level to be complete. To destroy these robots, you have a ninja sword that can be used or three shurikens that will kill a line up of multiple robots. In order for you to proceed to the next set of stages you must earn a total number of stars between your current levels, and in order to do that you have to beat certain time constraints. For example: beating a particular level at nine seconds will reward you two stars over one star at ten seconds. I found that getting 20 stars for the next set of levels was already enough of a challenge let alone the higher levels that require even more stars to unlock. The real challenge is in the game’s name itself, you only have 10 seconds to complete each level before you are forced to try again. Luckily, the game allows you to move a camera around the map before you begin, so you can try to plan your path accordingly. To add on to the frustration of beating the map in 10 seconds or less, you also have the added challenge of certain robots being electrified so you have to kill them with shurikens at a distance. The difficulty in this, is that with only three shurikens you have to use them wisely or else you may find yourself unable to complete the level and you will have to start again. 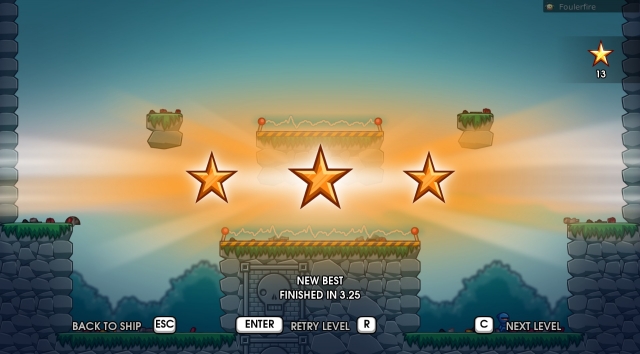 If you find that you are having trouble with a specific level, you can also unlock hint tokens via a minigame that has not yet been fully implemented, this will help alleviate some of that gaming anger which will definitely be directed at this game.

No matter how carefully you try to plan out a route there is still a serious amount of precision that is needed in order to earn more than one star on each level. All it takes is one wrong move and you’ll get to watch your character careen off the platform and fail the level. Even double jumping instead of a single jump can mean the difference between two stars and three stars. My one gripe with this game is that the music got extremely repetitive and I found myself getting extremely triggered when hearing the same music while failing a level. Eventually I turned my own music on and things became much more bearable again. Hopefully in future patches we will have a more robust soundtrack, however its simple enough to play your own music that it doesn’t have a big impact on the game itself.

Overall this game pissed me off beyond belief, but in a good way. The game is challenging and that’s how it should be, because without the extreme challenge the game would be about as exciting as Vaseline on toast. The controls feel really tight and responsive and the variety of levels certainly kept me entertained for a good number of hours. I was pleasantly surprised at how well the game played out, everything ran very smoothly and the control scheme was simple and felt really tight. There’s very little to criticize with 10 Second Ninja X, and would definitely recommend trying it out if you are a fan of game likes Super Meat Boy or Rogue Legacy.

The game is challenging and that’s how it should be, because without the extreme challenge the game would be about as exciting as Vaseline on toast. I can definitely recommend this game for lovers of platform games such as Super Meat Boy and Rogue Legacy and is certainly a welcome addition to the genre.