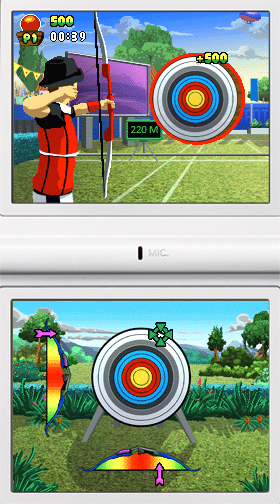 101 in 1 Sports Megamix does exactly what it says on the box. It delivers 101 sports to you in bitesized chunks. All your favorites are sure to be in there, Tennis, Darts, Volleyball, Snooker and of course Noodling (yes, that apparently is a real sport). You start the game with a handful of games and with each play you earn points which are used to unlock more games.

This sounds relatively simple but what of the crucial ingredient I mentioned at the beginning of my review which was missing? Well, that ingredient is "fun". The games are pretty easy, so much so that all challenge and indeed fun is removed from them. For example, the volleyball game consists of you moving your stylus back and forth on screen to move your character forwards and backwards to where the volleyball will land. Another example of these hugely simplified controls is a game called noodling, this mini game consists of you moving stylus around which controls a diver. Your aim is to catch fish and throw them up onto land, you just have to move your diver towards them and it does the work for you. This is a game aimed at the more casual gamer however so complex controls and in depth gameplay isn't going to be top of the list of important features. There is definitely an air of cheapness to this title, from the poor graphics on the majority of games, the overly simple controls which sometimes actually hinder the sport as the developer saw fit to utilise the stylus in every single event to the complete lack of difficulty in any sport in this game.

For example, Boxing consists you of moving the stylus up and down the bottom screen to position your boxer, then tapping either the left or right boxing glove icon to throw that punch. However as this is poory using both screens on the DS you have that awkward screen transition in which you can't really see your own boxer or your opponent if he reaches that point, so you're unable to see whether your punches landed or when he threw his. It's really poorly designed. 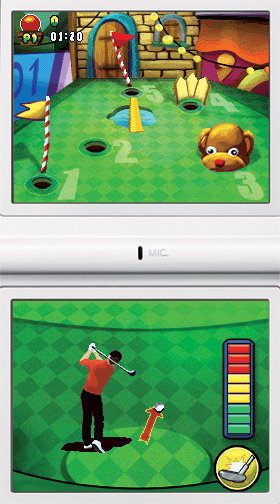 I found it difficult to dedicate more than a few short moments every time I switched this title on, even younger gamers may find this lacking in the interesting stakes, I'd be very surprised if someone actually played all 101 sports on this cartridge. All I could think of is stylus shovelware in my mind during every single event I had the misfortune of playing. While the price point may seem attractive to cash strapped purchasers, you can seriously do better, like spending that money on an entertaining evening at the moving picture house with your children, viewing Shrek 7: Great Grandson of Shrek in 4D or something.

Ouch, that does look pretty terrible. It's a shame - Atlus have some of the best games on the DS, like Super Robot, Dark Spire, and the fantastic Etrian Odyssey series.