12 is Better Than 6 is a Western-themed top-down shooter in which you play as Mexican (also sometimes referred to as Juan), a character that has no recollection of his past and takes several quests, all of which end up in bloodshed.

The story is the game's weakest aspect by far. The dialogue is bad, as the Mexican calls all of the enemies "gringos" with with a selection of very insulting words, including several F-bombs thrown around like sweets on Halloween along with some of the harshest Spanish cuss words that exist in the dictionary. The story is generally uncompelling, with none of the characters present feeling particularly likeable, which didn't inspire me to advance any further.

That being said, 12 is Better Than 6 excels in its combat and gameplay. Players can use one of four weapons: a revolver, rifle, bow, and shotgun, each with the benefits that we've come to expect from them. However, the unique — and very fun — mechanic of having to cock the gun, alongside the beautifully implemented need to click the reload button once per bullet, made for enjoyable gameplay that kept me hooked despite the story being so atrocious.

Finding ammo is a hard task, so the player will have to switch things up by taking weapons from any foes that are felled. This is a nice mechanic, given that it opens up the opportunity to have to try and get good at all of the weapons present in the game; learning each of their playstyles proved to be a fun enough challenge. The enemies also must live by the rules the player has as well, for their guns will lose accuracy whenever shooting from too far away, and they will also need to reload their weapon; this made for a pleasant and almost movie-like experience with the shooting scenes.

The player will get one-shot by any bullet that touches them, however they can return the same kindness to all of the enemies in the game. This mechanic sounds more frustrating on paper than it does whilst playing due to the AI's often poor aim. That being said, given that getting overwhelmed makes for the easiest way to die, 12 is Better Than 6 encourages a lot of stealth play. Stealthing is neither difficult nor frustrating, and it works more as a way to pick out some enemies before the shootout begins which I appreciated.

Throughout the world, players can find different hats to adorn their character. This was a silly addition, but one I really appreciated since it gave me more reason to continue and explore each world rather than just move on and try to find my way out; I actively found myself looking for the hats once I'd finished massacring an entire area.

Another extra that the game has is the money that can be acquired through the quests. When the second act begins, the player can also get a repeatable quest that allows them to get money through killing bandits; it’s a nice way to just be able to pick up the game and enjoy its incredibly fun gunplay. 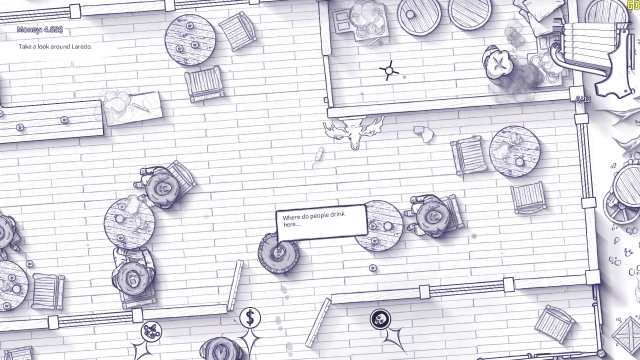 The graphics style and music are gorgeous as well, given that the game's unique-drawn style would allow me to pick it out from hundreds of others. And the music is nothing short of fitting and epic, with tunes that sound very Western and fit the theme of the game perfectly.

12 is Better Than 6 has a very enjoyable gun fighting mechanic; having to cock the gun and reload the bullets one at a time was stressful but fun whenever having to deal with tons of enemies at once. Additionally, the game encourages you to pick off some enemies using stealth, but not only was it never mandatory, it never felt like a dull experience either. The game moves just fast enough for you to be able to process everything and be able to do it quickly enough without having to repeat the same boring part. The graphics and audio design are also something to commend, given it's one of my favourite top-down view games when it comes to the design. It's just a shame that the game's story and writing are so bad and insensitive.

12 is Better Than 6 (Reviewed on Windows)

Gorgeous graphics, a wonderful soundtrack, and exhilarating and quick-paced gunplay makes 12 is Better Than 6 a very fun experience. However, the game is dragged down aggressively by its terrible story and equally awful writing.