A Little Golf Journey is, you guessed it, a golfing game. Whilst many in the genre are minigolf-style multiplayer affairs, this one is for solo players only. As you may expect, there is very little story-wise, but there is some! A mysterious person, known only as X, welcomes you to the club. They show you around the tutorial level, and leave some secret notes around for the best golfers to find which lead you to bonus levels. For some unknown reason the overworld is devoid of colour, but successfully sinking a ball into a hole will add a splash back within the localised area. Your mission then, is to best every golf hole in the world and fully restore it, whilst seeking out the secret holes to show your mastery of the sport. As you travel around, you’ll also discover messages between X and another person who signs off as Y, with an easy friendship shown between the two.

The tutorial does a great job of giving you the basics of how to play, and you really don’t need much beyond that. At its core, A Little Golf Journey is a game to relax whilst playing, rather than a precision-perfect simulation. That said, if you’re aiming to get absolutely everything out of the game then you will want to think creatively and search around all of the various levels for secrets and hidden objects. Every course has several stars you can earn, based on how many shots it takes you to drop your ball into the hole. Dots under the stars keep you constantly updated on how well you’re doing; most levels can be cleared in two or three well-placed strokes. There are no time limits, so you’re always free to move at your own pace. 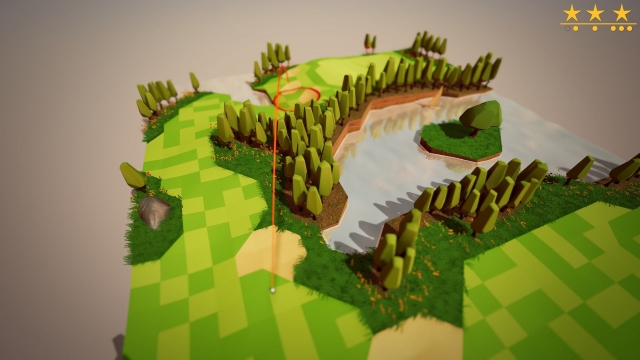 When making shots, you will automatically use the most relevant club. For the majority of your playtime you will likely be using an air-based club – there is no distinction between woods, wedges, or irons – and on greens you have the trusty putter. Making a shot is as simple as aiming the circle in the direction you want, and shooting. An orange circle indicates a regular punt, whilst a red one is a power shot – these travel further, at the cost of accuracy. There is an ability to steady your aim for a couple of seconds, centring the landing spot within the circle; elsewise, the trajectory indicator will wobble around in the target area.

For players who want to take the relaxation aspect further, there is an Assisted Mode in the options, where you can tailor various parts of the game to make your life easier. This includes features such as bigger holes, steadier shots, and bounce predictions to increase your overall accuracy.

Each level has its own generally rectangular diorama, filled with a visually pleasing array of décor. It’s clear what sort of terrain any given pixel is part of, so planning your shots is almost never a game of chance. The game is split into several worlds, ranging from your typical golf course, to a vista reminiscent of the Orient, and even the moon and cyberspace. The graphics aren’t stunning high definition, but that feels like a good thing here; since they are still high quality, they serve their purpose as pleasing backdrops and obstacles, rather than being immersing focal points. The soundtrack is similarly light and soothing, brought to you by Norwegian composer Haakon Davidsen. According to developer Okidokico, there is 70 minutes of melodic audio to accompany your journey. Depending on how fast you play through, this may be plenty or there could be repeats, but either way the tunes never feel too samey. As with the graphics, they serve their purpose well, keeping the atmosphere of the game calm and relaxed.

For those so inclined, A Little Golf Journey offers much in the way of collectibles and secrets. Some are more well-hidden than others, but there’s often a visual cue on the world map that indicates your current level has more than one way to aim. Whilst I won’t really go into any details – they are secrets, after all! – I will say that special sections themselves take on one of several different variations. Successfully discovering a secret (and completing the related challenge, where applicable) rewards you with a special note along with one or more bonus holes within that world. Each of these extra courses have stars to earn as well, and beating them can place “blue things” (yes, that is their official name) in certain levels, which are another type of collectible for players who want to unlock everything. Some of these blue things can be in hard-to-reach locations, and so may require a little more thinking outside the box in order to hit them. 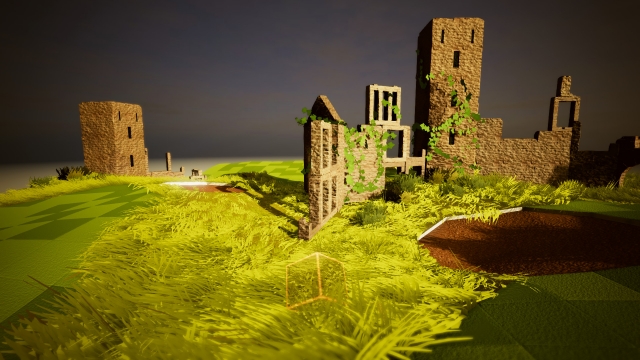 With a total of 109 levels, 400 stars, and 61 blue things to either play through or collect, A Little Golf Journey is a pleasing ride from start to finish. Whether you play for half an hour after a long day in order to unwind, or race through in a frenzy to obtain everything, you’re unlikely to find yourself bored. In fact, for a casual game, I was surprised at how many times I said “Just one more hole before I leave it for today…”

A Little Golf Journey is a treat from start to finish, and should be a wonderful addition to almost anyone’s library.