Alcohol, vulgarity, torture and sexual misconduct; this is Afterparty’s depiction of hell, and it’s where the players will be spending their time in the game with the two leads Lola and Milo. The story kicks off with the two teenage friends dying through unspecified circumstances and ending up in hell, where they quickly realise that they should probably try and find the quickest exit back to life. The two soon find out that the only way to leave hell is to face off against the head honcho himself, Lucifer, in a drinking competition, where they will be brought back to life if they can outdrink him. It’s a juvenile concept, but it’s not an idea that Afterparty takes too seriously, instead using it as the backdrop for a slew of comedic moments throughout the journey.

Throughout the duration of Afterparty, most of the play time is spent walking and talking to different NPC’s (aside from the occasional activities such as beer pong and dancing) meaning that the story is Afterparty’s only real hook. Unfortunately, the rather shallow setup doesn’t lend itself particularly well to a game that’s essentially all about dialogue and narrative. It’s not that Afterparty is devoid of any enjoyable moments, with the writing being rather sharp at times and the voice acting feeling natural, bringing each character to life. It’s that Afterparty simply doesn’t feel like a story that accomplishes much in its roughly five hour run time. 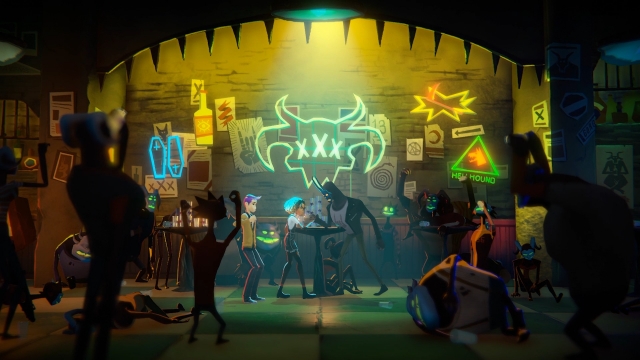 The initial setup of out-drinking Lucifer is the only major plot point that the game revolves around, with the rest of the title acting as a series of pit-stops and distractions from the main event. Lola and Milo get to Satan’s home early on to challenge him, but they have to help out some other residence of hell to get an entry ticket first. When they finally enter his house, Satan tells them to leave and challenge other lesser demons before the two can face off against the man himself. After completing those tasks, he yet again turns them down and tells them to find a drinking team. It’s a frustrating series of lead ups to the main events, only for the game to mandate that you complete other objectives that don’t feel particularly substantial or necessary.

The main benefit of these objectives is that they help to flesh out Afterparty’s depiction of hell, spending time on side characters and the different environments. The presentation in general with its synth-driven soundtrack and neon-infused colour palette does a particularly great job of selling a crazy night out in the underworld, as the two characters essentially embark on a journey through Satanic nightlife to earn their freedom, but the game is plagued with really odd technical issues considering its scale. Afterparty frequently stutters and hits low framerates, and it adds an extra layer of frustration to a game that’s already slow in its delivery.

Despite the fun depiction of hell and some amusing side characters, the two leads aren’t particularly enjoyable to spend time with. It’s hard to root for either Milo or Lola when they act like self-indulgent brats, and the character development they go through during the game doesn’t see them having any kind of changing outlooks on the world or life as a whole until a minor moment of self-introspection towards the end. They’re not likeable characters, and most of their growth comes in the form of their own tightening bond as opposed to becoming more tolerable people.

Afterparty is a narrative-driven game that fails to have the writing to back up its premise, even with the odd chuckle and some truly strong performances. Like a sober night in the town with drunken friends, it starts off amusing enough, but it wears out its welcome after a while becoming tiring and grating, and towards the end you’ll likely end up wishing you did something else with your time.

Like a sober night in the town with drunken friends, it starts off amusing enough, but it wears out its welcome after a while becoming tiring and grating, and towards the end.