It’s no secret that I love physics-based games -- I even wrote an article all about the best upgrade Flash games, most of which are largely physics based! They’ve always been something I’ve sought out, and it’s a big part of why games set in space appeal to me so much. One of the first games I was addicted to, was called Duel 2, and it was on a CD full of freeware and shareware that my best mate got. You and another player (using one keyboard) started off orbiting on the opposite sides of a star and had to kill each other with missiles, or by getting them to fly into the star. I took it into school on a floppy disk and it was the most widely played game in the computer room during lunch. I was a terrible prefect -- everyone loved me.

What does any of that have to do with Amazing Discoveries in Outer Space (ADIOS), and thus a review of said title? The orbiting around stars. Physics play a huge part in this 2D journey across a galaxy, as you might expect from a game that sees you in a damaged spaceship with a co-dependent artificial intelligence. 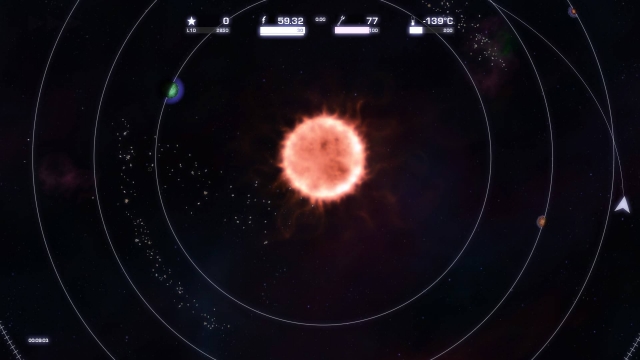 Asteroid belts and planets, and no other space-bound life

You start ADIOS by crash landing on a barren planet, you’re introduced to things slowly for the first part of this roguelike. Something happened to the ship, which has made it require a reboot, and realise that it needs you. The AI takes charge for the tutorial, telling you what to do for the first few planets, before leaving you to your own devices. You have to collect enough scan data from each solar system to allow your navigation computer to jump to another system. 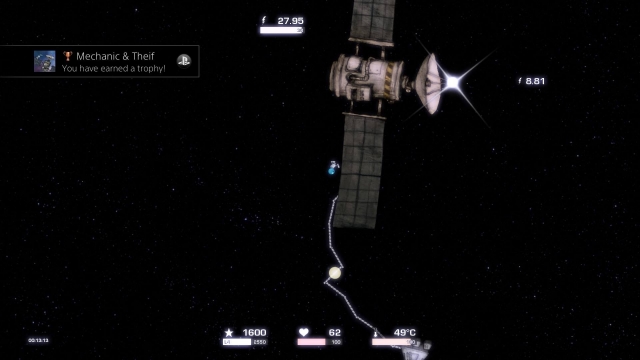 You often have to steal energy from pretty much everything

You scan things by flying in close proximity to them or by getting out and walking past them. Your first couple of sojourns through the galaxy, you lack the equipment to properly take advantage of things, which helps ease you into it if you’re unfamiliar with roguelikes. Personally I’ve never been much of a fan -- I’m the kind of guy who freaks out if a power cut screws me out of fifteen minutes of playtime, how do you think I feel playing for an hour only to have my progress completely undone by design? 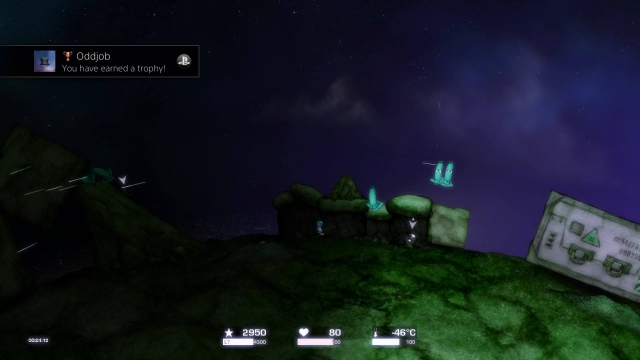 Ocassionally even the wind can kill you...

Luckily the fact that ADIOS eases you in meant that I was hooked the same way Rogue Legacy hooked me. Every time I play I die over and over, but jump straight back in because I know I can do better. So I didn’t notice a rogue asteroid, or I was moving too fast when I entered orbit of a planet… Perhaps I wasn’t paying attention and jumped into spikes, or let a group of alien beasts ravage me… I can do better next time! 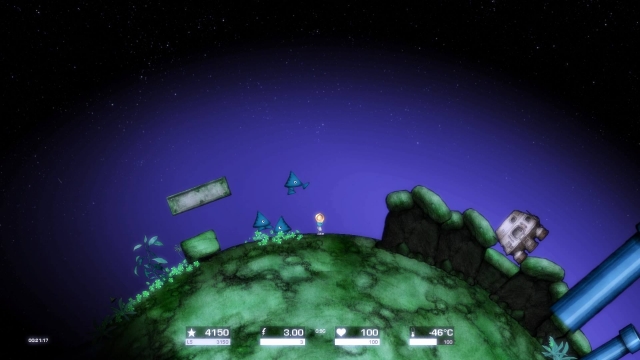 They don't like it when you steal their coins...

The information which you collect will range from scanning parts of satellites, sneaking up on sleeping aliens to scan them, collecting power sources for the ship, and even just landing on the planets. Each planet has different gravity, meaning your jump can be next to useless, or it can launch you into orbit -- and you’d best mind your limited jetpack fuel! Thankfully you can switch to piloting the ship by itself, though as I already mentioned it knows that it needs an astronaut to complete its mission, so you can’t leave without one!
The mission is actually pretty straightforward. It’s split into a few chapters which see you heading to your people, either on the home planet or somewhere further afield. As you explore more, you will come across new spaceships to pilot and new astronauts to do the piloting -- there’s really no telling where you will find them, as every system is randomly generated. There are certain criteria each one fits, so you know that at the 9th light year of the Voyage mission, you will encounter a super hot white dwarf star, but the amount of planets, their sizes and how much scannable debris is in the asteroid belt is all random. You can really be knocked for a loop

I have to admit, in a game full of stuff I love, the asteroids are easily my favourite part. Your hull is quite delicate (depending on which ships you’ve found), so a hard landing is your worst enemy. It’s made more perilous by the asteroids. If you’re in an asteroid belt, trying to navigate to scan something, the slightest collision can be disastrous for you. Even when you land safely on a planet they can really screw you over -- if the gravity is light and an asteroid smashes into a planet fast and close enough, the explosion might injure you -- and definitely launch you into space. This makes the lumps of space rock a legitimate threat, more so than the few aliens you may encounter who will try to eat you. Spikes are also a hazard, especially in this secret Mario-inspired system...

Although the galaxy is filled with loads of interesting things, fauna and fuel sources, it’s a pity the soundtrack doesn’t share the creativity. It does the job, but it’s repetitive -- it only changes from the normal music once you have scanned enough stuff. The music change is much more upbeat, but only lasts until you jump to another system. I found that this was a great game to catch up with my podcasts with, as my average playthrough lasted at least half an hour, and there were multiple plays each time. 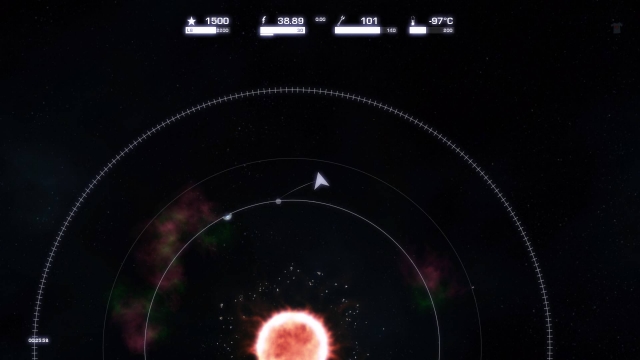 Despite that minor low, the rest of the game is full of highs, from the planets so close that the rotation makes the sun pull you away from it, to the fact that you can repair some objects to suck energy from them. The graphics are all small, and appear to be hand-drawn, but it works well playing on either a 32 inch HD TV or remote playing on the Vita. There is plenty for you to discover in ADIOS, including secret levels, so even if you’re not chasing a higher position on the leaderboards there is plenty of reason to keep playing.

A fun little roguelike which is willing to give you everything, if you’re willing to put in the time.