Every now and again, a piece of media unappreciated in its time may become more than only relevant in the present day, but as a spirit of an age. A body of work that thrives in the current conditions set upon us - where social interactions are scarce and connections through entertainment cannot be satiated through conversations round the watercooler alone.

Little did anyone suspect that such a thing had existed two years prior, in an indie 2D online party game: Among Us. 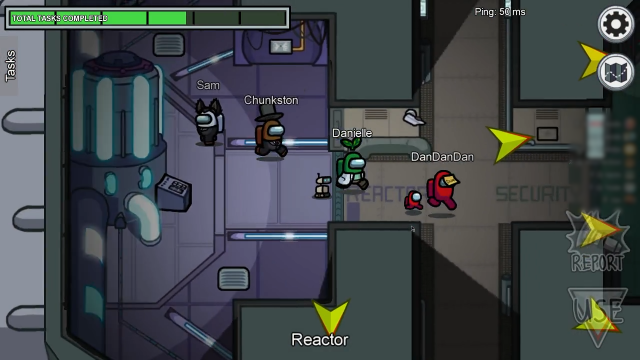 Built upon the foundations of social deduction games pioneered by the likes of Mafia, and subsequently card-game such as Ultimate Werewolf, Town of Salem; Developer Innersloth’s Among Us takes deception, deduction, and logical reasoning, and expands the concept far enough to push the genre forwards. Simply by sprinkling minigame components into the game.

Fusing action gameplay to the Mafia formula isn’t anything new (having been popularised in videogames like the Garry’s Mod game type “Trouble in Terrorist Town”), but Among Us’ métier in its accessibility. From the approachable cute flash game aesthetic that oozes early 2000’s Newgrounds nostalgia, to the straightforward controls and matchmaking that’s transferable from phone to PC platforms; the game seems to hit several sweet spots that similar titles hadn’t quite acclimatised to.

The cartoony sci-fi space horror sees you (and fellow crew) assigned with completing tasks around the map without communicating, all the while avoiding the bloodlust of a rampant imposter. If you happen to find your fellow crewmate decapitated, you can report the body to deliberate, deduce, and attempt to flush out the imposter amongst you. However, if the game selects you as the imposter for the round - you must deceive the crew into thinking you’re totally not a parasite whose sole purpose is to see the deaths of everybody in any way, shape, or form.

Among Us is relatively simple to pick up, but the mastery lies within the extensive knowledge of each stage. Bearing witness to the level of sub and metagaming that some experienced players operate at is hilarious in and of itself; especially as it’s just as easy for new recruits to thwart expectations of self-proclaimed detectives.

Within the overarching objective for innocents to wipe out the onboard imposter infestation, the crew must also complete a variable number of tasks in the form of minigames. Dotted around the stage, you can find an assortment of general and location-contextual chores to fulfil - in a way, giving the crew a purpose to survive rather than being a flock of sheep in a pen with a wolf. 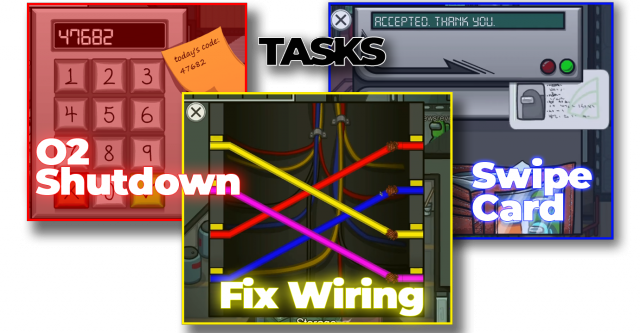 Tasks range from multiple connecting duties like reconnecting wiring or downloading and uploading data, Longer endeavors such as playing a game of Simon to get the reactor started, to more common assignments like swiping your ID in the admin rooms’ notoriously fickle card scanner. The number of tasks may be overwhelming to a lot of newcomers, but are manageable and engaging enough to figure out and remember on repeat plays.

Crewmates can also take it upon themselves to do non-task related duties, potentially risking the time to complete their responsibilities only to catch the culprit through surveillance. Security cameras, location tracking in the admin rooms, vitals reports, and sensor logs are all at the disposal for the crew; and with any evidence at hand, they can call an emergency meeting regardless of whether a corpse has been reported.

Death doesn’t stop the workload either! The crew have seemingly signed their souls to the science facility and possibly skipped the bit in the paperwork that says that even in death, you must repair and do maintenance work on all scientific instruments; and thus - you must complete your tasks as a ghost. Great for gameplay, bad for the ethical treatment of employees. 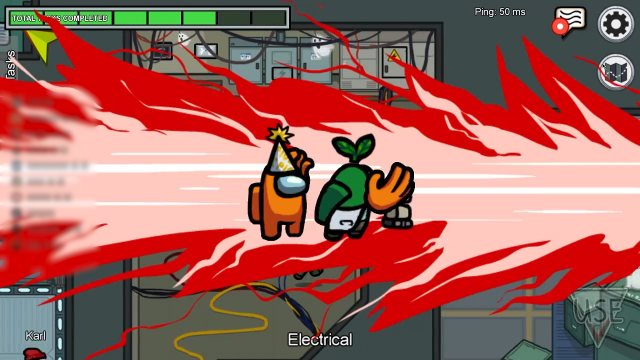 With the number of resources at hand, being an imposter can be even scarier than innocent! Luckily, you are well equipped with perks that when used correctly, can steal the game to your favour. Sabotaging the stage can be done from everywhere, causing such chaos as locking doors, cutting the lights - diminishing their cone of vision, disabling communications as to stop the crew watching the taskbar fill; to self-made catastrophes in tampering the oxygen and reactor chambers that require immediate attention and multiple people to resolve.

The opportunities made by sabotage can split up groups or move focus to another part of the ship, or depending on how you play, can give credence to your phoney alibi; as you can fix your own calamities. And if you ever needed to make a quick escape from the brutal atrocities you’ve committed, you can find the nearest vent and crawl to another area of the map.

So far, three maps have been available since review; “The Skeld” a typical broken down spaceship in need of repair, a highrise skyscraper and cargo base of “MIRA HQ”, and the research facility on the purple planet of “Polus”. 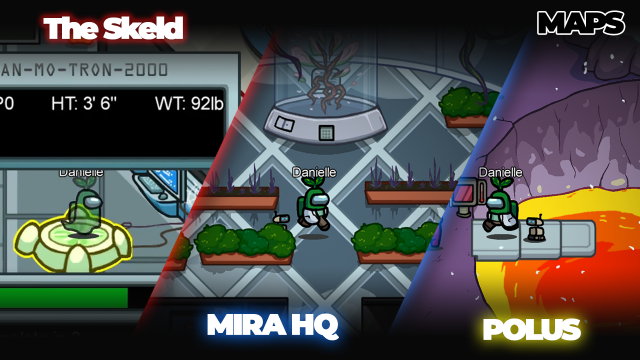 Each area has enough variety in environment and tasks to feel fresh after constant playthroughs, although some levels fare better than others. The most recognisable being the infamous spaceship stage The Skeld is usually the default for most first-timers and seasoned space-crew, as it offers a good balance between imposters and crewmates in difficulty.

MIRA HQ has some entertaining minigames strewn along the map, although compared to the other two stages. MIRA can feel a bit cramped with it essentially being a series of long corridors leading towards too many alcoves for your body to be found, or to steer suspicion away from you. Meanwhile, Polus skirts this problem with the amount of space and buildings available, though a large area of the map, namely the “Specimen room” is far away from the general action of the game, and is partitioned with two decontamination chambers which are prime murder hotspots.

Being purely an online game, experiences are up to who and how many people you play with. And as such, public matches tend to be notoriously chaotic, which can be a novelty - but it’s rife with hackers, cheaters, and trolls. I would not recommend going into a public server if you wish to enjoy Among Us for what it’s vying to be; only to bear witness to the absolute pandemonium that is random matchmaking. 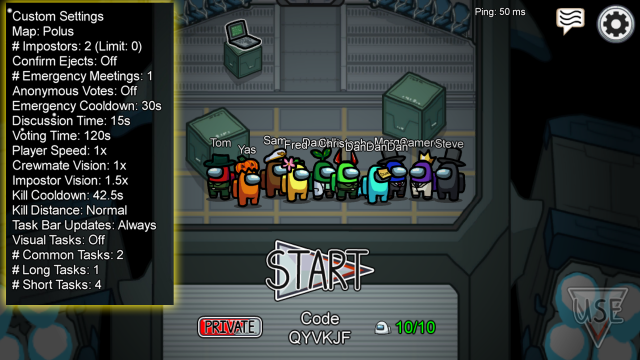 Where the game truly excels, is to be found within the hands of the players themselves; For it’s the private matches and flexibility to tweak and tinker the rules that adds a fair amount of freedom and variety to players. Like how there seems to be a different set of house-rules for every game of monopoly, playing with others can give you little bits of interesting setting options to play with as the base game is so solid in concept.

Though it’s not integral to the true nature of the game, private matches over voice-chats have become the dominant way to play; and arguably, the optimum experience. Unfortunately, it can be a bit of a kerfuffle curating those outside your familiar bubble if they’re ill-equipped with your established setup.

Understandably, that responsibility is out of the hands of the developer - however, a handy guide or nudge in the right direction for those either looking for more social games or server FAQs would do wonders for the less tech-savvy.

Of which is to be expected of anyone new, it can be a pain to explain fundamental rules that Among Us doesn’t make obvious to newcomers. The biggest thing that can cost a match is knowing that they have to do their tasks once they're dead - when a simple reminder once you die would suffice. 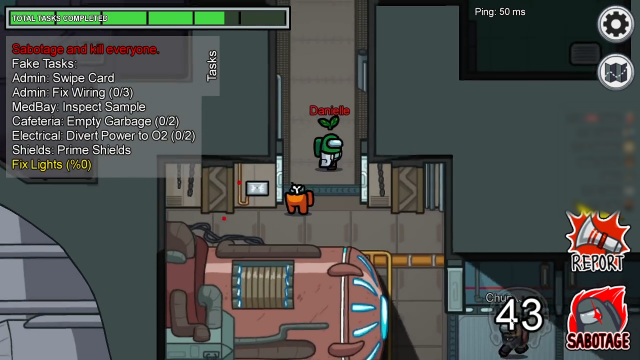 Among Us has found a beautiful equilibrium in its simplicity, it only needed the audience that it deserved. Now that the base game has taken off to new heights, the future for the title (and potential franchise) seems brighter than ever.

There’s always room for improvement, and here’s hoping we see more than a new map down the line - such things as an increase of players in one game, the ability to set environmental traps/hide in walls, adding the probability for a third party like a spy who works for the imposters (or a double agent: working for the crew but posing as an imposter), or even a traitor system that can allow one crew member to be made into an imposter in certain game-balancing circumstances.

Luckily, whilst the game has spread worldwide, constant patches and fixes have seeped their way during the hype - most notably, allowing further options to customise the rules of each round. With more flexibility spawns new iterations of play, and the possibility of new maps on the way, this will hopefully keep the game alive down the road.

Among Us (Reviewed on Windows)

Accessible enough for everybody, Among Us coaxes out everyone’s inner psychopath and Sherlock. With short addictive bursts of gameplay that's long enough to satiate, this sleeper hit has/will become a staple in your games library and gaming nights to come.

How To Play Among Us with Discord

This game has been more entertaining than games that cost ten times the price! Absolutely excellent fun, and one of the few online games I actually like playing.