Have you ever thought to yourself: would I survive in the wild like our ancestors or would I die in a second because I lack the basic knowledge they possessed? Ancestors: The Humankind Odyssey from Panache Digital Games lets you answer that question to the fullest extent by providing an intense and puzzling journey from the beginning of man to the present day.

Ancestors: The Humankind Odyssey is a third-person survival game where the goal is to see if you can survive like our ancestors did while evolving from ten million years ago to the present day. There isn’t a story to this game whatsoever, the only goal is to see if you can evolve faster than our ancestors did by comparing your evolutionary journey to the facts presented by science from the real-life journey of our ancestors. This is done by completing evolutionary feats like learning how to create a spear or discovering a species, but you don’t know what these feats entail until you actually perform them in the world, which is where the puzzling part of the journey comes in. 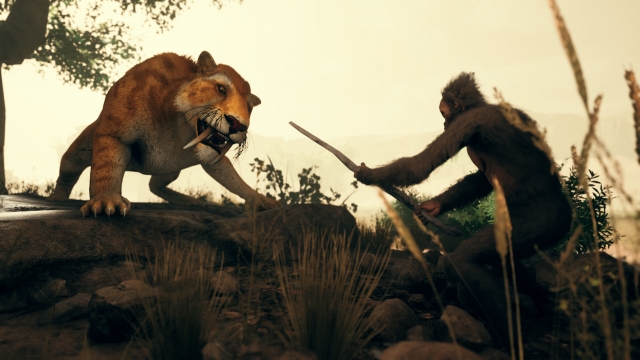 As the intro to the game rolls in the game explains to you most of what I mentioned above, but also adding that they will not help you much and you’ll have to figure most of the game out yourself; they were not joking. The early stages to Ancestors: The Humankind Odyssey is pretty brutal because you have no idea what you should be doing or how to proceed, which may turn some people off immediately, but I personally enjoyed the “ah-ha!” moments once I discovered something new. The starting objective is something along the lines of “can you evolve faster than science?” and it remains that way for the rest of the game. Ancestors: The Humankind Odyssey is centred around the player learning everything for themselves and to see if they can learn them faster than our ancestors did. It does a really good job of sticking to that and making me want to be better than our ancestors because we should be right?

Unfortunately, I don’t think I am because after 30-35 hours of playtime I still haven't made it to the present day, but that’s mainly because I had to restart the entire game after about ten hours since my clan of primates died. They warn you that if all the primates die in your clan that it will be game over in the beginning, but I wanted to move my primates to another location since I discovered most things in the one I resided in. Unfortunately, we got attacked by literally everything and we didn’t make it. It was super frustrating once it happened, but it taught me to make sure my other clan members are equipped with a weapon before heading out. This is something I would have never thought of beforehand, which is the point of the game: to learn as you proceed.

Since each player has to figure out everything for themselves, I think that this game will flourish within the community of players that want to learn everything about Ancestors: The Humankind Odyssey. Online communities will hopefully be filled with people showing you how to complete some of the evolutionary feats that you probably never would have figured out on your own, and I can bet many people will be sharing how to craft most of the items, which I’m personally excited for so I can move forward as well. 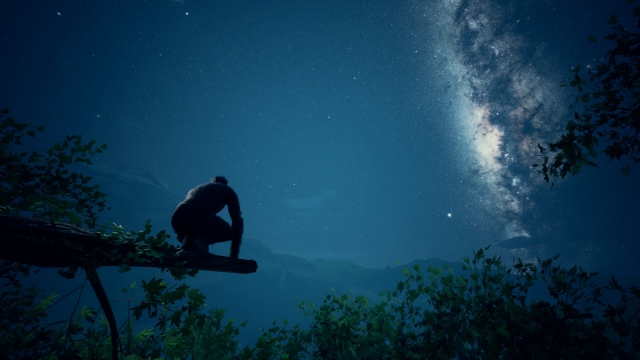 There are so many systems in this game that it would turn this review into an essay if I go through each and every one of them, plus I think it will be better for most players to discover some themselves, but I will go through the main ones.

Having children is a key component in Ancestors: The Humankind Odyssey because if a child is on one of the adult’s backs as you explore and learns about the world, it will earn neuronal energy that can be used on the neuronal tree to unlock nodes, which is essentially a skill tree. It can give you essential skills you need to survive such as being able to swap an item from one hand to another to be able to alter an item, but you won’t know what altering it does until you perform the action on everything you can. The neuronal tree is based on the senses you can use in the game such as smell, hearing, intelligence and communication, and the more you use these senses the more nodes will be unlocked to use your neuronal energy on.

These senses are used with the face buttons with each having their own purpose. The senses work similar to eagle vision in the Assassin’s Creed games, but each one shows you something different. Intelligence is the main one you will be using since it can locate most things around you, smell can be used to find food and predators, hearing can be used for predators as well and finding other primates in the world to join your clan. These primates will usually have a problem that needs solving before they can join you and it becomes confusing at first, but once you see the pattern it just becomes a memory game based on their animations and movement. 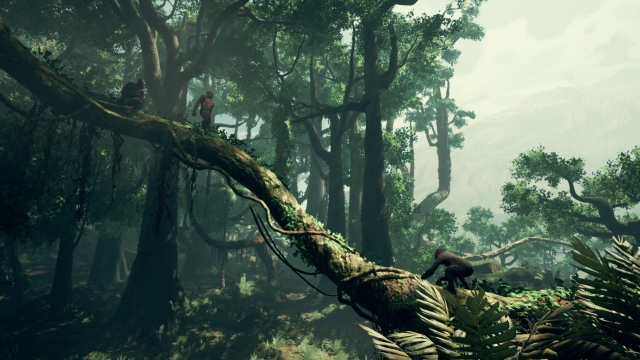 After you have unlocked a few neuron nodes and had a few babies, you can lock them into place and perform a generational leap in time. This will turn kids into adults, adults into elders and elders will have died, but those nodes you locked beforehand will be kept in the family forever. The other leap in time you can perform is an evolutionary leap, which is the main goal of the game. You can perform an evolutionary leap once you have completed enough evolutionary feats and have gone through a generational leap. Once you leap it will show all the feats you have accomplished since the previous evolutionary leap and show you if you’re doing better than science or not, which is an awesome feature and always makes me feel better about myself once I see that I’m doing better than science. It’s also really cool to see your clan of primates slowly become more and more human-like as they begin to walk on two legs and such.

An annoying part of having children, performing time leaps and gathering new clan members is that they all have a cutscene that you cannot skip, and considering you’ll be having a lot of children, that one gets annoying more so than the others. After my fifth child, I was rolling my eyes at this cutscene because it’s the same one every time and it is way too long. The other ones aren’t as annoying since you don’t see them as often, but I hope they add the option to skip each of them regardless.

The primates actually feel pretty great to control and movements and animations for them, and some of the other animals – especially the snakes – are excellent. Controlling the primates through the trees can get a little frustrating since they don’t go exactly where you want sometimes, but being able to climb almost any surface in the game is a huge help for traversal. The combat and crafting elements become repetitive rather quickly since if you listen and follow the audio cues while performing each, you can easily get a successful attack or successfully craft an item. This is kind of a problem with the majority of the game's systems and if you aren’t sure how to proceed, you could be doing the same things for a while. The world itself is a death box. It feels like everything in it is trying to kill or poison you, whether it’s an attack from a predator or just eating the wrong things, you are always cautious for what you’re about to do and I think it’s great. Ancestors: The Humankind Odyssey is really teaching you to be aware of your surroundings and how to make sure your lineage of primates make it to the present day on trial and error. It was a few attacks from a giant snake later that I finally realized I can use coconuts to get rid of their poison and extend my primates life.

Visually, Ancestors: The Humankind Odyssey isn’t the best-looking game, but you quickly forget about the lack of visually quality and start to appreciate how dense and packed this world is and how it remembers you’re in there. Eating everything off a plant will cause the plant to die and even if you return at a later date that plant will still be dead, which can be annoying when you’re in dire need for food, but also forces you to relocate as you should. Ancestors: The Humankind Odyssey ran great on max settings on my PC (Intel Xeon E3-1231, 16GB RAM, and GTX 1060 3GB) maintaining a solid 60 frames per second the majority of the time. There were some glitches like one of my clan members being stuck in the mouth of a snake or one of the clan members being stuck in place, but nothing game-breaking and a quick restart will solve them. 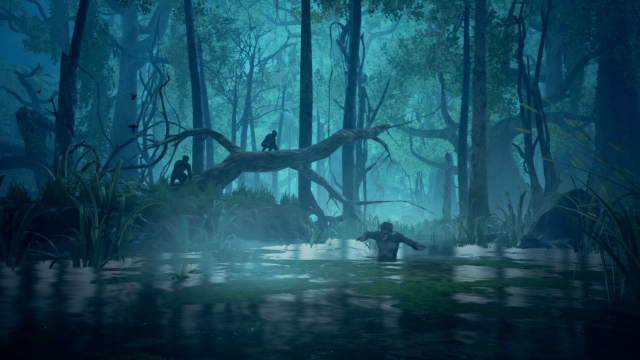 Ancestors: The Humankind Odyssey is a very unique game about the evolution of man that isn’t afraid to drop you in the world and make you figure out everything for yourself, which may turn some people off immediately. It can get frustrating when you aren’t sure how to proceed, but that frustration can turn into curiosity, which can then turn into you learning something new to advance your lineage to the next evolutionary chain and I think that is the heart of the game. Unfortunately, some of its core mechanics get repetitive once you understand how they work, but I still enjoyed the sense of discovery that came with each expedition.

A very unique game about the evolution of man that isn’t afraid to drop you in the world and make you figure out everything for yourself, which may turn some people off immediately.