I love boardgames. They always give me that nostalgic feeling of crowding around a coffee table in pyjamas, and rolling dice with family and friends. I would be lying if I said I have never played a board game on my own, rolling the dice for imaginary opponents. But it just isn’t the same.

Armello is a strange and wonderful amalgamation of virtual card game, board game and turn-based strategy from Aussie indie developers, League of Geeks. Such a mixture of concepts is certainly overwhelming at first, but an extensive tutorial - or Prologue - leaves you confident that you can successfully navigate the card, dice, combat and political system of the game. With a fairytale landscape and lovely, cartoon-style characters, it quickly sucks you into a world of war and magic. 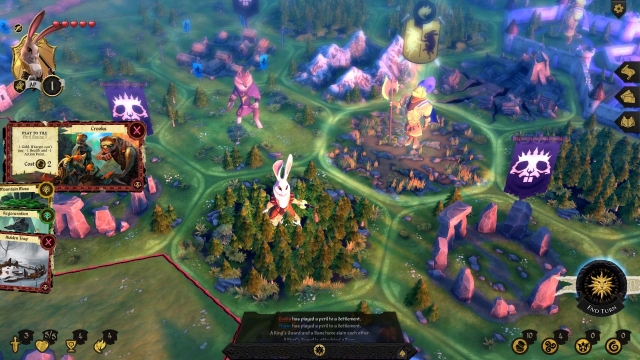 In the land of Armello, the king - a lion, naturally - is overcome by a disease called rot, which has corrupted his body and mind. Each dawn of the game’s day and night cycle, he gradually succumbs to the disease and loses a health point. The aim of the game is to race three other players - either friends, or AI - to either kill the king and take control of Armello, or have the highest number of Prestige points when he dies. There are a number of ways to take down the king, so that most play-styles are accommodated. Whether you prefer brute force, a sly assassination, or even to lurk in the sidelines slowly growing in political power - there is a place for you in Armello.

Before I plunge further into this land of thrones and assassination, I’d like to take a moment to point out how beautiful the game is. Its character lineup is almost Disney-like in style, and the landscape forms a soft, fantastical backdrop. Zooming in pulls the scene into a pop-up book view, whereas zooming out causes a haze of white clouds to gradually obscure your view. The music is dramatic, but unobtrusive - although you are aware of it, and it reflects the actions occurring in the game by becoming more urgent in combat, for example, it remains at the edge of your hearing, and doesn’t interrupt your calculating thought processes. The animations during the game are captivating and perfectly compliment the cartoon-like art style. Even the cards are animated slightly, with the barest detail of movement to bring them to life. Hovering over a card reveals a signature of the animator and artist, which is a touching reminder that the entire game is, essentially, a piece of artwork.

It is a shame, therefore, that the world is so tiny. There are very few hexes to traverse, and I could see all of the tiles in a handful of turns. So, although the map varies from match to match, there just isn’t enough of Armello to keep you wanting to come back for more. This does force you into combat much more, as you cannot avoid one another for long (unless you are stealthed in a forest at night, or are using a stealth spell). The varying characters, on the other hand, do encourage multiple replays, if only to get a feel of the perks of each one. The characters hark from feuding clans; Rat Clan, Rabbit Clan, Wolf Clan and Bear Clan. Some characters are engineered towards stealth and assassination, whereas others are stronger, or more magical, or have an affinity for gold. Varying character, and changing your approach to becoming the successive ruler of Armello, changes the game entirely. It is most certainly easier to hoard prestige, and win the throne by means of political power, but assassination is an entertaining challenge, and a risk. Assassination attempts are dangerous, and failure can give your opponents an advantage. Questing awards each character either recruits for the party, combat perks, gold or prestige, and quests vary between characters. Some quests offer a scenario, and you are given two options. One option is considered a ‘dangerous’ choice, and you are given a percentage chance of success. The cost of losing is usually paid in life points, but winning can award a valuable card as well as additional strength, magic etc. A safe choice is also offered, which omits the chance of winning loot. I found myself biting my nails more than once as I clicked the dangerous option, and punched the air in celebration or hissed in disappointment. Your decisions heavily influence your chances of success in the game, and you find out quickly how the delicate balance of chance and risk-taking can tip the dynamics of the game out of your favour in an instant.

Armello offers yet more choices, so when you are the Prestige Leader - ie, the character currently possessing the most prestige - the king offers you a choice of two royal decrees. These can affect either players or situations in the board. Decrees affecting players will also affect the Prestige Leader, so you find yourself in nail-biting moments where you must decide whether to make certain sacrifices, and what option would benefit you the most. Some characters are more efficient in battle during the day or the night, so even the choice of engaging in combat becomes a vital, game-changing decision. 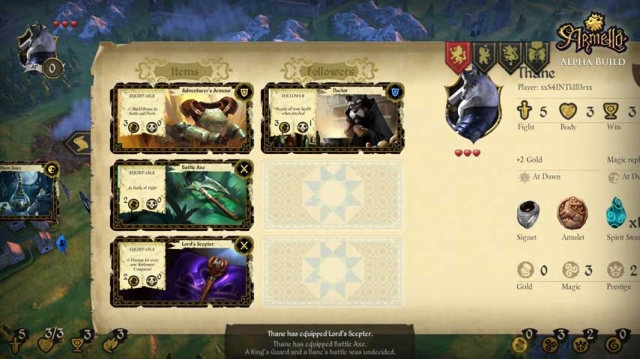 Cards include a myriad of spells,trickeries and equipable items which can be played at any point in the game - even when it is not your turn. This has the potential to completely unhinge the flow of the game, and curveballs can be thrown in at any point to mix things up. However, especially when playing against AI, the game can move very quickly. As a new player who is not familiar with the cards’ effects by sight, you often don’t have time to read and select a card before the opportunity to use it has passed. There is no pause, so you must be extremely quick to draw the right card and the right time.

There are few different types of tiles - they include settlement tiles and dungeon tiles, both used to generate gold. Killing other heroes is a sure way to earn gold and prestige, so setting perils and engaging in combat is encouraged. Certain cards apply rot, and the only way to regenerate health is to kill other heroes. You are therefore forced to take a twisted, murderous path, slashing your way to being the darkest ruler Armello has ever known. You can, of course, take the throne by brute force, or by curing the king with special stones. If nobody achieves these, then the most prestigious hero at the time of the king’s death wins.

With so much to consider, you would expect Armello to be fast-paced. It is, after all, a race to victory. However, each AI character takes a turn and you are forced to sit through and watch as they draw cards, change position, battle, deal with perils, and cope with every hardship and choice that you face on your own turn. It takes a very long time for it to finally roll back around to your turn, and there is no way to skip or fast-track through these moments. It becomes rather tedious after just a couple of turns, and I found myself taking time to text or play on other games between goes.

With so much information to take in, the learning curve is understandably steep, and so it is thankful that the price of death is simply to be returned to your respective clan settlement. There is a multiplayer option, but it plays very much the same as single player.

In all, Armello is an intriguing and absorbing concept, which is for the most part well executed.The graphics and animations are beautiful, and almost nostalgic, whereas the gameplay is urgent and demanding.

The combination of RPG, 4X and board game really works, and with the exception of a tiny map size and some repetitive elements, it is an extremely promising debut for League of Geeks.

There is a fast forward AI button accessible in Single Player mode.  Also, even when fast forward is not enabled, the AI complete actions like drawing cards, walking, and resolving fights with non humans near instantly.