With only a month left left to go, Desmond Miles and his team are fast running out of time to unravel the secrets of Those Who Came Before and put the brakes on the upcoming cataclysm that threatens to extinguish the bright lights of the human race. It's just a shame those pesky Templars are always getting in the way.

To unlock the key to mankind's salvation our unwilling hero must put aside his daddy issues and delve once more into the Animus, this time into the boots of Mr. Rarohnhake:ton, A.K.A Connor Kenway, a half-British, half-Mohawk Assassin who holds the key to unlocking the temple in which Desmond and his crew are camping out.

Connor's mission leads him away from his once peaceful village to become embroiled in the American Revolutionary War and the ancient battle between the orders of the Templars and Assassins that has been waging across the centuries. The story takes place over several years, beginning even before Connor's birth and passing through several decades of his life.

Assassin's Creed III is an ambitious undertaking by Ubisoft and without doubt is the most content-packed iteration of the series to date, with a substantive main story being backed up by countless side-missions, activities, collectables and mini-games. Unfortunately, players must be prepared to go through a substantial 'tutorial' section before the game opens up to its full potential. 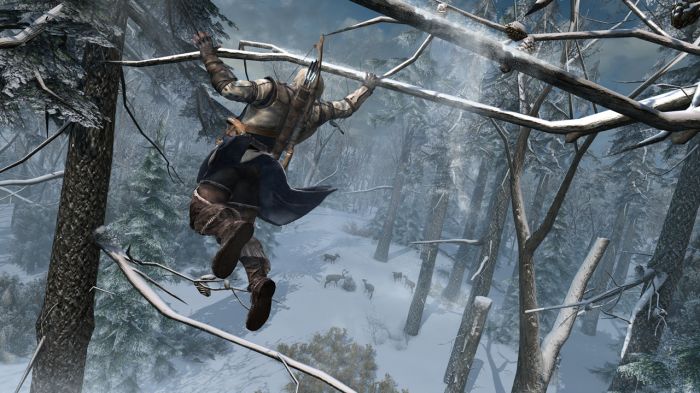 The game starts before Connor is even conceived, giving you the chance to play through the significant events prior to his birth, his childhood, his adolescence, his introduction to the Assassin Order and his subsequent training. As in previous titles, the main story thread in Assassin's Creed III proceeds through a number of 'sequences' and it's not until reaching sequence six (out of a total twelve) that things really open up fully and allow the player to explore the rich open world that Ubisoft have created.

Depending on how you play through the first five sequences and how often you get distracted along the way (there are side-missions at this point, just less) it may take anywhere between three-to-six hours before you reach the point where the game opens up to all your procrastinistic desires.

The main story itself is rich, detailed and full of interesting historical characters, with Connor finding himself a central figure in many of the significant and pivotal events leading up to, and running through, the Revolutionary War. Like in previous games there are twists and turns, morally grey themes and a certain level of maturity throughout the storyline. To go into specifics would give away too many spoilers, but this is very much a story-focused experience and it fulfils Ubisoft's promise of bringing closure to the storyline and the role the modern-day Desmond plays in proceedings.

In fact, there is so much going on in the story and Connor meets so many unique characters during the course of his adventure that it can be very easy to lose the thread, forget who people are and find yourself wondering exactly what is going on. Thankfully, those who aren't adverse to a bit of light reading can consult substantial Animus database through the pause menu to read up on important characters, locations and events and remind themselves exactly where they are up to. 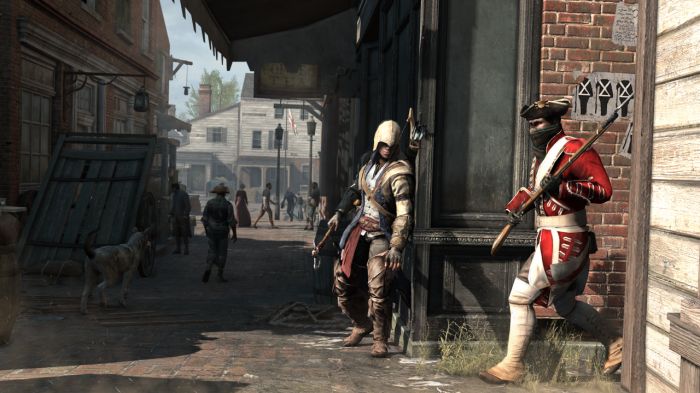 Also located in pause menu is the logbook, which is particularly useful in understanding what is going on. In here you will see details of all the available mission types and information on the potential rewards for completing each one. Even with a three-to-six hour hour tutorial, without reading the logbook most players will find themselves struggling to understand many aspects of the game.

As entertaining and enjoyable as the main story is, players who concentrate exclusively on this aspect of the game will be doing themselves a massive disservice. The world of Assassin's Creed III is in many ways a playground and the sheer amount of activities available is breathtaking. To really get to grips with what the game has to offer involves spending a significant amount of time between story missions exploring the world and trying your hand at a number of different activities.

You can hunt for wildlife in the frontier; setting snares, tracking animals and selling the meat and pelts. You can build up the facilities in your homestead and recruit farmers, miners and more to work the land. You can liberate cities from the influence of the Templars, recruiting new Assassin allies in the process. You can complete challenges set by frontiersmen or prove your combat skills to a society of brawlers. You can even establish a vast trading network, crafting trade goods from raw materials and dispatching caravans to carry those goods to merchants for coin. This is not an all-encompassing list and each activity has a level of depth and is supported by detailed and enjoyable missions.

One particular highlight and one that was pushed heavily by Ubisoft in their marketing campaigns and demonstrations in the run-up to release are the naval combat missions, in which Connor takes direct control of his own vessel, the Aquila, to trade broadsides with both the British navy and the unscrupulous privateers operating from American waters. 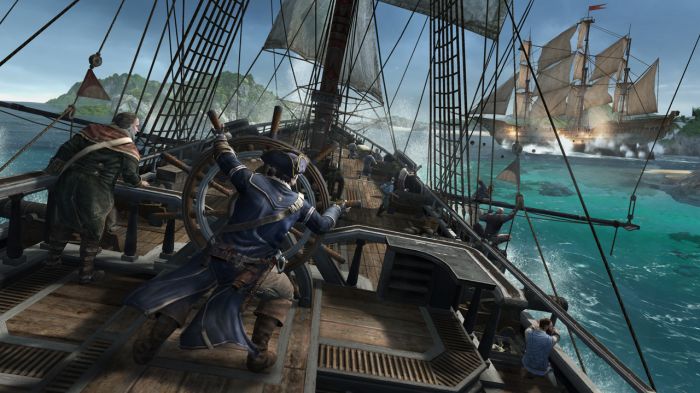 The level of detail in these battles is incredibly deep and the player must strive to be aware of all the enemy ships around them to avoid their cannons, manage the Aquila's sails, keep track of wind direction, brace for high waves in stormy weather, use cannons effectively, juggle between appropriate ammunition types, manage shallows and rocky waters, protect allies and more - often all at the same time.

These missions are both challenging, great fun to play and a far cry from the shallow nature of the rather tedious tower defence mini-game introduced in Assassin's Creed: Revelations. It's feasible to say that this one aspect of play could form the basis of an entire game in its own right, but in Assassin's Creed III these missions form just one part of the rich tapestry of what makes the game so special.

The control system has been refined over that used in the previous games and there is no requirement to hold down multiple buttons while free running or in combat. Connor is more agile than previously playable Assassins and, more importantly, tends to jump and move where you want him to: unless you force him to with a secondary button press he won't leap anywhere that will hurt him and won't attempt a jump that he has no way of making. Combat has also been made more fluid and while it sticks closely to the familiar counter/respond formula there is a greater focus on using proper timing, adapting strategy based on enemy types and a utilising a wider variety of weapons and tools including the tomahawk, flintlock pistol, rope darts and more.

It's not all fantastic in revolutionary America and there are some unfortunate negatives that prevent Assassin's Creed III from being all that it could be. The overly-long tutorial section has already been mentioned and can be frustrate those who are desperate for things to open up. Connor Kenway himself, while being far from a two-dimensional character, is certainly not as interesting nor engaging a character as Ezio Auditore was from Assassin's Creed II onwards. 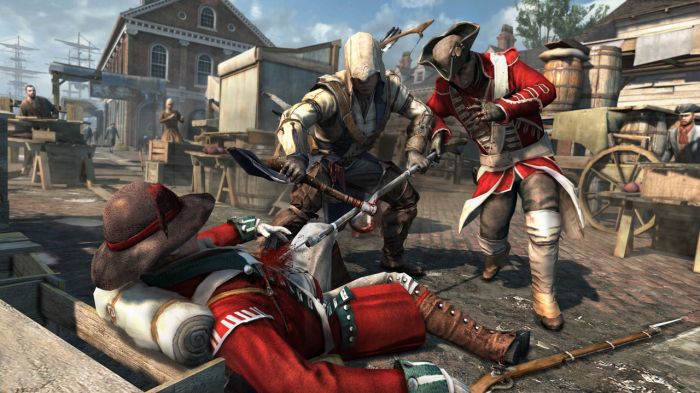 Desmond has his own missions outside of the Animus involving both infiltration and action in modern day-environments. While these are far more entertaining than the, frankly odd, first-person moments in Revelations they still lack the punch of Conner's historical antics.

Finally, the game is undoubtedly the buggiest version of Assassin's Creed to date. Pop-up pedestrians are commonplace and randomly disappearing pedestrians only slightly less common. Also encountered, although less frequently, were frozen camera controls, people becoming stuck in scenery, broken lip-syncing and, in one particularly amusing moment, the Aquila doing a full 360 degree vertical flip. With the exception of the frozen camera control, which occurred three times, none of the bugs had a significant impact on playability but certainly serve to spoil the mood when they crop up. Of course, you could always pretend it's a glitch in the Animus.

Outside of the impressive single-player gameplay is an entertaining multiplayer experience broken down into free-for-all, team-based and cooperative playing experiences. Free-for-all games are broken down into three subtypes, although each follow a similar formula of attempting to assassinate other players whilst avoiding being killed yourself by using tactics and abilities to blend into the crowd. Clever tactics are rewarded and players earn higher scores for killing their targets inconspicuously or in imaginative ways.

Team based game modes are also broken down into three types; in Manhunt teams take turns between being the hunters and the hunted, killing or avoiding as necessary. The Domination and Artifact Assault modes follow the formula of zone control and capture the flag games respectively. Finally, in Wolfpack mode a team of players work together to take down AI targets and earn points without running out of time, earning valuable seconds on the clock by taking out the marked targets. 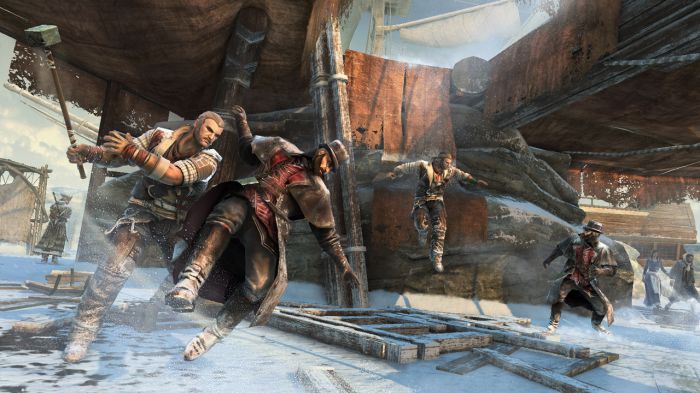 Multiplayer also features a storyline of its own, told through videos and hidden files contained in the 'Animus gaming machine' which can be unlocked by increasing your multiplayer level or completing challenges. Advancement also earns a player in-game currency and your combination of character level and currency available allows abilities, gadgets and kill streak rewards to be unlocked for use in-game.

Impatient players can purchase these items outright through micro-transactions if they lack the patience to reach the required level count and funds. This can lead to a small amount of imbalance if you are facing off against far better equipped opponents, but ultimately it does not take too long to unlock a decent set of tools the old fashioned way and, when you get down to it, this is a game that rewards player skill far more than ability sets.

All-in-all, the multiplayer package is an entertaining experience that rewards skillful play with constant advancement options that keep you playing to unlock the next exciting tool in the assassin's arsenal. The simultaneous feeling of being both the cat and the mouse makes the free-for-all games the highlight of the experience but other game modes have their benefits too. The only real issue is that whilst you can choose between joining free-for-all or team-based games you can only set a 'preference' of what subtype you want to play, so often find yourself in one of your less favoured game types when connecting.

Overall, Assassin's Creed III is a great experience that lives up to most of the promises Ubisoft made to us in the run-up to release. A robust single player story forms the core of the game and is supported by a veritable bounty of side-missions and sandbox fun. Top this off with an interesting and gripping multiplayer mode and you find yourself with a game in which you can happily sink countless hours into before getting anywhere close to 100% completion. A few bugs, a less exciting main protagonist and a tutorial that seems to last forever hold things back somewhat, but there is enough content here to keep almost anyone entertained.

With only a month left left to go, Desmond Miles and his team are fast running out of time to unravel the secrets of Those Who Came Before and put the brakes on the upcoming cataclysm that threatens to extinguish the bright lights of the human race. It's just a shame those pesky Templars are always getting in the way.

Great review mate, will hopefully be getting my hands on this next month :)