I’d all but lost interest in Assassin’s Creed in the build up to the latest title from Ubisoft Montréal. ACIII left me feeling unsatisfied and, while the previous games were all great, I wouldn’t note any of them as particular favourites. To top this off, Assassin’s Creed IV: Black Flag looked to be a somewhat uninspired re-hash of the third (or was it fifth?) game. So to say that I went into ACIV with low expectations would be an understatement. With that in mind, it’s perhaps safe to say that this is one of the most surprisingly fantastic games I’ve ever played. ACIV is pure unadulterated fun. It manages to remove a lot of the old tropes that bogged down previous games while creating bold new directions for the franchise. It’s not only a well crafted Assassin’s Creed game but also a pitch perfect pirate simulator, and that’s exactly where the brilliance lies.

The Golden Age of Piracy during the 18th Century, around the West Indies, is an ideal place for a video game, that much can’t be denied. The lack of a centralised city (or cities), however, left many to question its place in an Assassin’s Creed game, myself included. It turns out that the open waves and numerous islands of this intriguing location actually work out perfectly. Gone are the maze like cities where one street would be practically indistinguishable from the next. In their place is a game world that encourages open-world exploration in its purest form. The large collection of islands that form the West Indies are now your ports of call. Of course, all of this would be aimless if the world failed to truly capture the spirit of the time. In this regard, ACIV far exceeds any of its predecessors. It all starts with Edward Kenway; a strong willed, arrogant, but honest-hearted welshman who simply stumbles into the story by pure coincidence. He’s not an assassin, not in the same way every previous protagonist has been. Edward instead steals the renowned robes from an assassin that he personally eliminates. It’s a neat introduction to the world that these people live in; no half measures and no regrets. The pirates (or privateers, as Edward prefers to call them) are about as far from the somewhat dull characters of ACIII as they could possibly be. The characters are well written, well voiced and well animated; the holy trinity of gaming personalities. Of course, having historically lively figures like Blackbeard and Charles Vane helps matters, but the key here is not only in their presentation, but also the manner in which they are used.

The story of Black Flag is one of the most simplistic yarns told in an Assassin’s Creed game. In a series famed for its convoluted plot lines and confusing dialogue, that’s not necessarily a bad thing. In fact, the focused storyline easily allows ACIV to become a character led piece, and with the individuals so brilliantly recreated, which means the story is entertaining from beginning to end. There’s a lot to see; witty pirate chauvinism, some interesting representations of women and a paradoxical exploration of pirate ethics, not to mention the good old fashioned ‘brothers in arms’ concept. I learned to love Edward, despite all his ethical shortcomings. He’s by far one of the most interesting Assassin's Creed protagonists yet, and I’d argue that he gives fan favourite, Ezio, a run for his money. The overarching story is nothing revolutionary, but it’s a great accompaniment to the natural exploration that you’ll embark on. 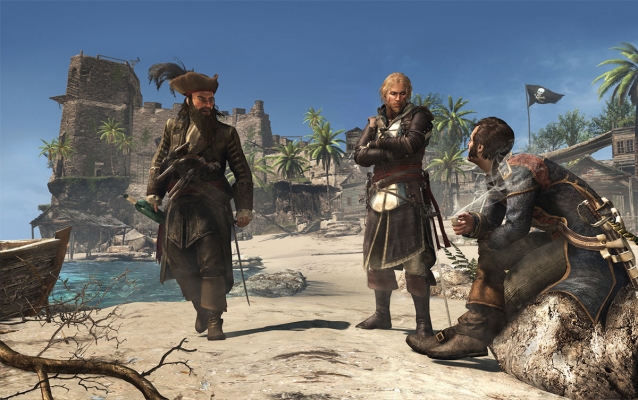 Personally, I’ve never been a big fan of huge open worlds. They have a tendency to feel lifeless and empty, despite their size. This has always been true for Assassin’s Creed; soulless NPCs, aimless tasks and repetitive locations have become unfortunate hallmarks of the series. Black Flag, more or less, eliminates these problems. While larger towns like Kingston and Havana exist, they don’t form the main body of the game world. Instead, there are dozens of islands to discover, each with their own secrets, missions and points of interest. From the start of the game all the way to the end, you can freely sail the ocean, hopping between destinations. The islands vary from tropical paradise to shanty fishing village, with sparse beaches and spooky hollows in between. Each one feels like a new level to discover and complete; the fact that the game’s several collectables are spread over the islands adds to this sense of discovery.

Of course, traversing islands and living the pirate lifestyle would be nothing without a fine ship to sail across the seas. The Jackdaw is Edward’s brig, and she’s a mighty one at that (which is some pirate lingo I’ve picked up). Sailing the seas is great fun; the mechanics have been tweaked since ACIII, giving the Jackdaw a more pleasing sense of weight, but she’s also swift enough to feel progressive. As perhaps the most crucial element of the game, sailing between islands is genuinely enjoyable. I’d liken it most to driving in GTA V: pleasing mechanics, a great soundtrack (which I’ll get to later) and full of surprises. Despite this comparison, it’s totally different to anything I’ve experience in gaming, and one of the best parts of the whole game. Combat onboard the ships is also top notch. It’s not especially complicated, but finds a good groove between tactical and fun, largely due to the effect of the unpredictable sea. Unlike fighting on land, sea battles can actually present a challenge. Taking on huge ships early on is an easy route to desynchronization, so upgrading your ship becomes a priority.

Customisation has become an important element of the Assassin’s Creed formula, and it’s available in droves in Black Flag. There are plenty of options for Edward’s outfit, the suave ‘Captain’s robes’ were a comfortable choice for myself. Weapons and kit can also be improved, although these simply require a large amount of coin. Improving the Jackdaw, however, is a more interesting affair. Upgrades not only need pockets filled with cash, they also require certain types of goods. Handily, these goods can be acquired by taking on the ships that fill the West Indies; you didn’t think you’d get through a pirate game without committing some actual piracy, did you? Damaging and boarding ships, which is a great activity in of itself, is the prime way to gain additional goods. The bigger the ship, the bigger the booty. Once you’ve got enough of the correct goods, you can improve the Jackdaw with better armour, guns (of many varieties), and appearance changes.

While naval combat is exciting, varied and dynamic, the combat on land hasn’t changed at all. So the simplistic, but ultimately satisfying, mechanics are still in place. They tend to be one of the most divisive features of the Assassin’s Creed series. I personally enjoy the easy-going combat, it’s nothing challenging, but it’s highly satisfying. The same can be said of the free running, which is also almost identical to that found in ACIII. The base mechanics on land, then, have barely changed, whether that’s a good or bad thing will largely be down to personal preference. The missions, which obviously rely on these mechanics, are mostly good. The increased number of locales is great for mission variety and that excellent character focused story brings the most out of them. There seems to be a lot of stealth focused missions this time around, and if I have one primary criticism of ACIV, it’s that the stealth mechanics are still really quite bad. It’s a shame, no doubt, but doesn’t take much away from the experience. 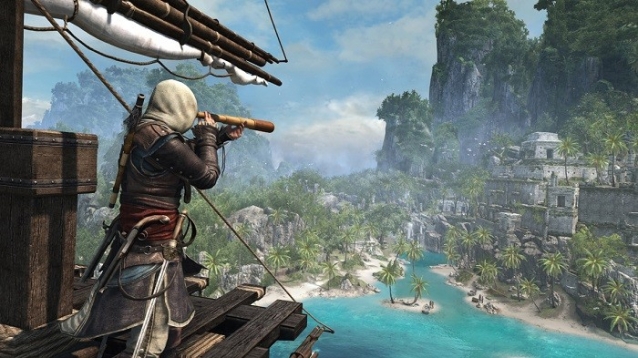 It’s easy to forget that you’re not actually playing as Edward Kenway in Black Flag, he’s just a genetic memory simulation created by the infamous animus. This time round you take on the role of an Abstergo employee who’s helping company research the genetic memories of Desmond Miles. The spanner in the works here is that you’re not a direct employee of the corporation, but rather Abstergo Entertainment, who create video games based on animus experiences. They’re making a pirate themed game, you see. Although it becomes apparent pretty quickly that there’s more to it than that. The modern day segments are seen through the eyes of this mute individual and are extremely simplistic; they’re more about furthering the story than providing killer gaming moments. Some basic optional puzzles unlock titbits of information that will be great for those who follow the underlying Assassin’s Creed story, but pointless for those who don’t. So in some ways, this is the best modern setting yet. It’s small, but full of details for those who want to discover them.

I mentioned earlier that the soundtrack to traversing the high seas is on par with GTA V, I meant it. You see when sailing, you can ask your crew of scallywags to start up a hearty sea shanty. I have no qualms in saying that this is the best thing about Assassin’s Creed IV: Black Flag. The songs have a rustic feel that blends perfectly with the adventurous tone of the whole game. Just sailing from one point to another feels relaxing, looks beautiful and gives off all the right vibes. Brilliantly, the sound design is excellent across the board. The chatter of pirates and locals is great to hear, combat on both land and ships sounds authentic and brutal, and the accents alone are fantastic. There’s an undeniable sexiness to Edward’s voice and it’s what raises him above all previous Assassin’s Creed protagonists. The game is also graphically excellent, even on the current-gen version I tested. While the next-gen version will undoubtedly look superior, there’s no reason to think that those sticking with current-gen for now are being shorthanded. 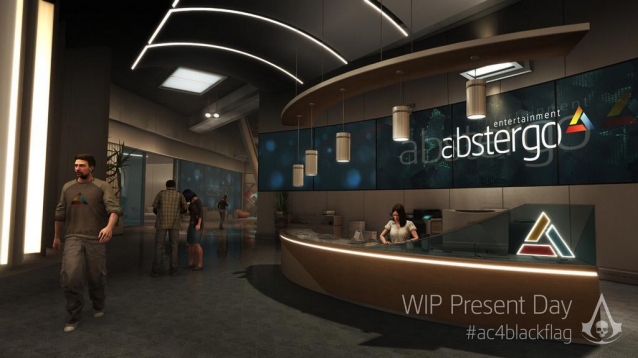 The multiplayer element of the game is pretty much business as usual. There’s the typical inclusion of new maps, new look and some new party tricks, but fans of the multiplayer experience will feel right at home. The much-touted game lab mode allows players to adapt the games to their preferences and experiment with mechanics. It’s a neat addition that feels a little overdue, but is great for replayability. Anyone expecting something truly new in this department may have to wait for the next title, but if I’m honest, the single player alone should be enough to sell this game. The multiplayer is a bonus, by all accounts, and a nice update to the segments for those who follow it religiously.

What I can’t stop thinking about this game is that, ultimately, this is what I was hoping the original Assassin’s Creed would be back in 2007. Black Flag presents a game world that is wonderfully historic, yet incredibly fun. Being a pirate is one of those childhood fantasies I’d love to live and ACIV brings me one step closer. Probably as close as I’m going to get without the help of an actual animus. Every moment spent playing the game was an enjoyable one; whether I was exploring islands, looting ships, falling for Edward, enjoying the sea shanties, losing myself in the story...OK, I’ll stop. Point is, there’s a lot to enjoy in this game. Do yourself a favour, go out and get it. If you’ve got a PS3, go buy it on that, then spend an extra £10 to get the PS4 version so you can play it again. That’s what I’m going to do.

Black Flag presents a game world that is wonderfully historic, yet incredibly fun. Being a pirate is one of those childhood fantasies I’d love to live and ACIV brings me one step closer. Probably as close as I’m going to get without the help of an actual animus.