It’s been a little over a year since we last saw Ryza and the gang set out on an adventure but now, with the release of Atelier Ryza 2: Lost Legends & the Secret Fairy, it’s time to set out again with this bunch of loveable characters. For this second outing, developer Gust has taken what made the first Atelier Ryza game standout from the rest of the series and aimed to refine it. With more focus on story, improved gameplay, and a more action-oriented combat system, Atelier Ryza 2 continues to step further away from the series norms but does so in a way that makes it reach a higher bar than its predecessor.

Atelier Ryza 2 picks up three years after the events of the first game in which players find that Ryza is alone on her home island of Kurken, with her friends having all moved on. While this is a sombre start, things quickly pick up and her friend, Tao, sends her a letter inviting her to the mainland to join them on an expectation of some newly discovered ruins. From here, the stage is set as our alchemist in training heads to the mainland to rejoin her friends as they set out on a brand new adventure to uncover the truth behind the region's many ruins.

As players explore the vast open world and the ruins that are scattered throughout, they will slowly piece together the story of both the ruins and the overarching plot. There are a lot of twists and turns, even some backtracking, but the payoff is worth it with a generally compelling story to be enjoyed. Once more, the characters and their main interactions are great and for those who play the first title, seeing how the cast have grown over the three year time skip is generally heartwarming. It’s not just the adventure that is bigger this time around but also the world. In order to make exploring it that much more fun, players will now be able to swim, later learning to dive underwater, swing across gaps, have access to a mount, and even gain the ability to light up dark locations later on in the game. These, combined with the fact you will be exploring the world for materials to synthesise, put a real focus on exploration more than any other title in the series before. Which is a good time to mention that even the Gathering Tools have been adjusted to make them more user friendly and less of a grind to upgrade over the course of the adventure.

To help you enjoy exploring this new world, Atelier Ryza 2 has seen some improvements to the visuals that make it a treat for the eyes. While it might not seem like the graphics are too dissimilar to the first time, new lighting and reflections along with weather effects make the overall visual fidelity a step above other games in the series. Additionally, the new character designs are great and animations have seen a massive overhaul in battles making them a joy to witness. Once more, it all runs at a pretty stable framerate on PC as well though in some areas can be a bit taxing on your machine. The graphics settings available to you though in order to optimise it for your system are broad so those with lower end machines shouldn’t have a problem running the title. 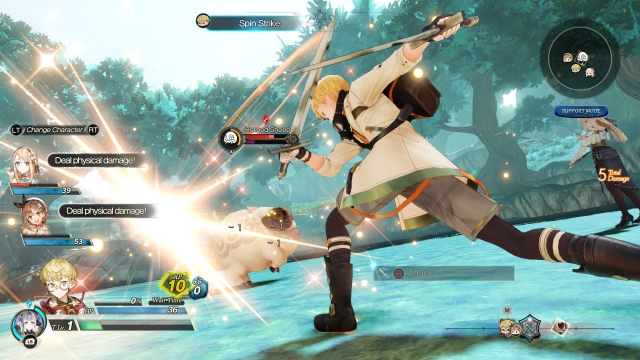 Combat in Atelier Ryza 2 retains the mix of turn-based and real-time seen in the last entry with a few changes to help spice up the experience. While you will still need to manage a number of resources such as “AP”, Tactics Level, and Core Charges, how you do so is a bit easier to understand this time around. Your party will build up AP as they attack enemies and can then spend it on special abilities and attacks. Unlike the last game you don’t need to worry about saving them in the heat of battle to improve your Tactics Level and instead, will see this increase as you deal more damage throughout a fight. As for Core Charges, these are no longer limited use and instead can be earned during a fight by performing special attacks.

While these changes might be a bit odd, they overhaul the combat system to make it a much easier balancing act. Rather than having to rely on one set of points for everything you can now build charges for each of these independently, giving much more freedom in how you approach a battle and build your party. Once more, there is a bigger focus on combo attacks this time around with the combat system rewarding you for chaining attacks together both in damage and visual spectacle. You can also manually block now meaning those with good timing will be able to have a chance to further reduce incoming damage.

The series staple of alchemy makes a return with a few small adjustments to help streamline the whole experience, such as the inclusion of a “Skill Chart” to determine your progression. This allows you to exchange SP earned through exploration and alchemy to unlock new recipes in an order that works best for you. You won’t find yourself struggling to get enough points for everything but having a clear sense of how your alchemy is developing and what items you can create next is quite nice. That said, other than a few other small tweaks the alchemy system remains mostly unchanged from the last title and honestly, that’s fine. 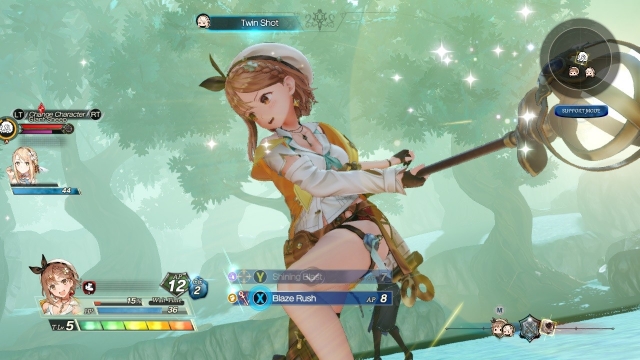 The only real complaint I have with Atelier Ryza 2 is that some of the cutscenes drag on for what feels like an unnecessary amount of time. While they are skippable, it is a shame that some rather short interactions or even tutorials are put into cutscenes that can take up to ten minutes. Thankfully, as the game picks up the pace so does the story and towards the later stages of the adventure, cutscenes become much more enjoyable. It’s just those early hours that can really drag on a bit and might put some people off the title.

In all, Atelier Ryza 2: Lost Legends & the Secret Fairy took what was an already solid experience and elevated it to the next level. Just when it looked like developer Gust had peaked it took the series even higher. While there are some initial pacing issues and not everyone is bound to like the more action-oriented combat system, there is plenty to love here. From a compelling story with a loveable cast to the simply gorgeous world to explore, Atelier Ryza 2: Lost Legends & the Secret Fairy might just be the best Atelier game yet and one I recommend all JPRG fans check out.

Atelier Ryza 2: Lost Legends & the Secret Fairy is easily the best game in the series yet with a compelling story and refined gameplay to boast.