Turn-based RPGs have always been a bit hit-or-miss with me. On one hand, the slow pace allows the player to think and plan ahead without worrying too much about being interrupted. The obvious downside to this gameplay style is that there are times when there is nothing the player can do and the slower pace can also leave players feeling bored. Battle Chasers: Nightwar tries to get around these issues by giving the player more options than other similar games through a unique mechanic called overcharge. How well this succeeds is largely determined by the player and their ability to plan ahead while using overcharge efficiently. Like other games, heroes have health and mana, but unlike other similar titles, there’s overcharge that can be used as extra mana.

The overcharge system confused me at first due to the other changes to combat that come along with it. Simply put, overcharge is earned when the player performs certain actions with their heroes. These actions are primarily made up of basic attacks, but several defensive techniques can garner overcharge if used correctly. For example, Garrison (big sword dude) can consistently gain overcharge by hacking away at the bad guys in front of him while Gully (big glove girl) will see better results if the player mixes her taunt ability with her basic attack. This is because Gully can earn overcharge when she is hit and when she hits back. All of these actions can be done without spending mana or waiting any number of turns and Gully’s taunt even lasts until she is hit three times. 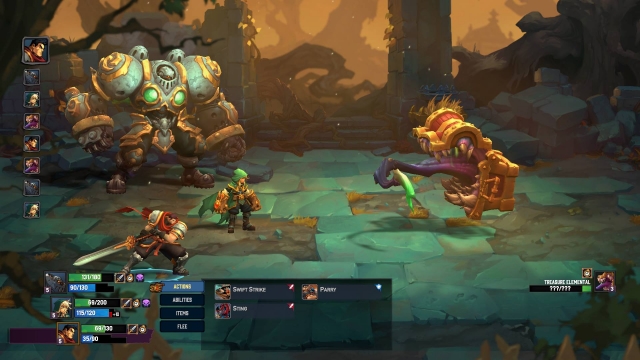 Since every other ability the heroes have requires mana, being able to supplement it by using overcharge is a welcomed addition. Whether it’s one of Garrison’s high damage attacks or Calibretto’s (big war golem bro) healing wave, a ton of the most useful abilities need mana or overcharge to work. Another interesting change to form is found in how long these actions take to activate. Unlike other titles that would see the hero perform the attack or defensive move immediately, Battle Chasers has abilities that require mana to activate after a number of turns. Because of this, the player must plan out their turns carefully, making sure they don’t die before the action can play out. This simple extra level of detail makes every encounter a mini battle of timing and strategy (unless the enemy is too low level).

Between this neat take on special abilities and the overcharge mechanic, I find most battles interesting or at least satisfying since I feel like I outplay my opponents each time. The benefit of this is extremely wide reaching due to the sheer number of baddies you will be fighting throughout the game. Whether delving deeper and deeper into one of the several dungeons or taking on any of the many, many ‘random encounters’. The brilliant thing about these battles is that on overworld map, you can tell where they will be triggered and you can plan your route accordingly. Since the player must move on set paths, it’s not always possible to avoid fighting once or twice. While that may seem like a bad thing, Battle Chasers has another answer in the form of loot being available from all fights and all across the map. For those worried about trekking over old stomping grounds, keep in mind that once the player is strong enough, the game will ask if you want to engage weak enough bad guys. The encounters on the map aren’t even the meat of the game as Battle Chasers truly shines when the player must traverse the title’s dungeons. Like you’d expect, dungeons are made up of many smaller rooms of various shapes and sizes, all filled with enemies, traps, and loot. Enemies are partially themed around the area they’re found in, with a few random ones (slimes come to mind) thrown in to bolster the variety.

Unfortunately, the traps are less impressive as they are typically obvious and easy to avoid. This is rectified somewhat by the addition of hidden areas and mini puzzles that can only be accessed through particular abilities or wit. Then, there's the loot. There may not be Diablo or Borderlands level of goodies to find in each dungeon, but what you do find is usually interesting enough to warrant a quick peek in the menus. You could find a unique weapon or armour piece for your characters or maybe you’ll find a ring, necklace, trinket, usable item, or even crafting materials. With so many things to find and collect, what else could dungeons have to offer? 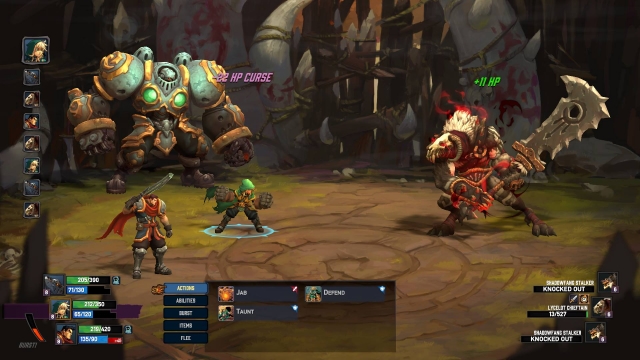 Bosses, that’s what! At the end of each dungeon is an impressive face off with a boss that could easily wipe out the heroes if the player is unprepared. These fights feel quite a bit more dangerous with the big baddie doing significantly more damage, having more health, and/or being far faster than other enemies. At times, I feel like I’m just surviving until I can recuperate and retaliate against these guys. Team composition becomes very important in these fights and that leads me to one of my personal biggest gripes. In the beginning of the game, you only have access to three heroes out of the total six shown in the opening scene. By the time I added another to my small group, I couldn’t find a reason to have them replace anyone on my team. Spending as much time with those three as I did, I was too comfortable to switch it up for the sake of trying out someone new. Beyond this, the new addition had slightly less XP than my current heroes and when I chose to try changing my heroes, I found that my team no longer had the same XP since heroes that aren’t in the active team do not gain XP.

That last point is more of an annoyance than anything, but it still bothered me a bit. I also found issue with crafting items and what not as I could not find a use for it until quite a bit into the game and I simply didn’t want to learn the whole system when I could be dungeon delving. I found myself looking to the other options of getting more powerful weapons and realized that the best way to get them would be to continue to rerun the dungeons at various difficulties. It’s a good thing fights start quickly and the load times aren’t that bad, despite there being a few in some really annoying places. On top of this, the art is wonderful and the dialogue is written well enough to give each character a personality whether they are voiced at that time or not. Although, honestly, my favorite little addition to the game has to be the fishing minigame. While it isn’t very fleshed out or even challenging once you get the higher leveled rod and bait, it manages to be reminiscent or Ocarina of Time’s own fishing minigame. Sometimes, it’s just fun to go virtual fishing. 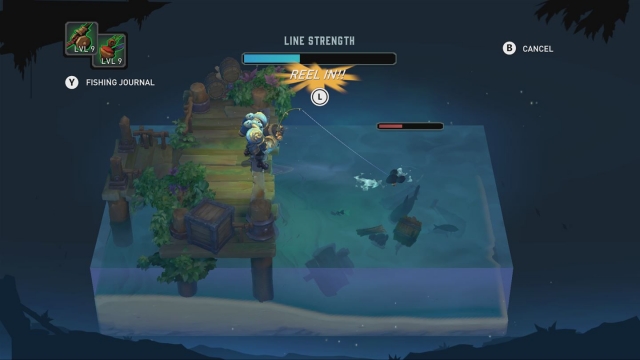 My sentiment about the fishing does a decent job of reflecting my feelings about the game as a whole. I enjoy the game plenty, but I don’t see myself going too far out of my way to play it. The battles can be enjoyable and engaging, but there are simply so many of them with the same enemy composition that it becomes repetitive, albeit after quite a long time. Exploring the overworld is interesting since there are things to find and even little secrets to uncover, but beyond walking around, reading and battling, there is little more to do. I understand that the game is attempting (and succeeding) to capture the feeling classic turn-based JRPGs had on offer years ago, but the issue is that I simply don’t have time to immerse myself in something that doesn’t grab my attention completely. While I found the dungeons exciting on my first run through them, the feeling of awe is completely absent on subsequent runs. I even found myself nodding off when I was trying to complete a dungeon for the second or third time to get a particular treasure. The dungeons are awesome, re-running them over and over again is not.

For me, Battle Chasers is going to be a game I play through once and am totally satisfied with putting down at that point. Although, with so many aspects to latch onto, I can definitely see how many other RPG fans will keep coming back to the title. While it may not be the next Final Fantasy X, those looking for a return to form for turn-based experiences like this will pleasantly surprised.

Sporting more interesting mechanics than you can shake an oversized sword at, Battle Chasers has a little bit of everything from classic turn-based JRPGs for everyone. Even though it loses the wow factor on subsequent runs, the dungeon delving has a lot to offer and can hide some rather sneaky secrets. Not a bad title by any means, only a little repetitive, despite its efforts to be otherwise.