I’ve always considered myself a major fan of the Battlefield games. From Battlefield 1942, to the cult classic Bad Company series and the more recent Battlefield V, the series has always found ways to grip me with hours upon hours sunk into it. Having had a taste of the Battlefield 2042 beta, I was excited to test out the full game.

Battlefield 2042 is the latest entry into DICE’s Battlefield series, an FPS game with a focus on large-scale battles with teams fighting towards objectives to control the map. Despite a single-player mode becoming a staple of the series, Battlefield 2042 lacks one, with glimpses of the story instead expressed through the multiplayer mode and external media. By the year 2042, several key factors — such as the collapse of the EU and destruction from space debris — have led to a fever pitch of tensions between the United States and Russia, resulting in all-out war.

We engage in this war with the use of No-Pat Specialists, stateless refugees with unique abilities that fight for either side. Gone are the days of having generic soldiers with dedicated uniforms representing which side they fight on, now we have sharp-talking “hero” units with a wealth of outfits, and enough sass to make a Marvel Cinematic Universe dialogue writer facepalm. This is my first gripe with Battlefield 2042. In the heat of battle, and especially when the UI bugs out and doesn’t highlight your teammates, it’s incredibly easy to lose track of who you’re fighting. Combine that with Hardcore modes and a UI that paints the name of anyone you have killed in red, whether they are friend or foe, you can get lost in mowing down an entire squad of your teammates before coming to the realisation that they aren’t the enemy. I don’t hate the idea of Specialist units, despite the removal of traditional Battlefield classes in favour of them. There are some with really fun abilities, such as Sundance, who has a wingsuit for mobility, or Webster Mackay, who has access to a grappling hook. However, these units have removed a very clear identifier between the two factions at war, and it feels cheap having identical fighters on both sides, despite DICE making an effort to explain with the whole No-Pat angle.

The increase in player count to 128 per game was a change I was greatly excited about, but it’s clear that the map design has suffered as a result. It took me too long to really put my finger on it, but the maps in Battlefield 2042 just feel so empty. Maps feature a lot of wide open areas with minimal cover, and the parts of the maps that have structures feel unfinished, such as the map Hourglass, which resurfaced long-forgotten memories of nights spent on untextured Counter-Strike: Source community maps. Tying in closely to the map design is the severe lack of destruction featured in Battlefield 2042. Going back to the first game in the series, and greatly being built on for the Battlefield games utilising the Frostbite engine, map destruction has become synonymous with the series, with the term “levolution” being coined for the dynamic map changes that happen throughout a game. Destruction and “levolution” events have been greatly reduced in Battlefield 2042. Don’t expect your explosives or tank shells to open up new entry points to a building or to adjust the flow of the map in your favour; despite some map-changing events still taking place, such as launching the rocket on the Orbital map, this feels like a tremendous step backwards in a game that so desperately wants to build a fresh future for the Battlefield series. Cool guys don't look at explosions, but I do.

The UI is another casualty of DICE’s attempt at streamlining the series. On top of the previously mentioned issues of how names on the kill feed are displayed, the UI has also been gutted to bare minimum details, which makes you feel like you’re not doing anything if you’re not getting a kill. Previous Battlefield games would give you a points feed on your screen to represent your continuous damage to a vehicle, healing of a teammate or resupplying of your squad. This has all been reduced, which makes it harder to track if your flimsy anti-vehicle launcher is actually doing anything to stop the lurching tank ahead of you, even if the game is providing hitmarkers. Where once you could roughly gauge how much damage you’ve unleashed onto the armoured truck holding down the objective, you’re now left clueless. Also removed is the revive system that was perfected in Battlefield V. You can no longer see the medics closest to you, and medics can no longer send pings to downed teammates to let them know they’re coming to help, so you could be holding down the “Call for help” button for no reason whatsoever, which often seems to be the case. 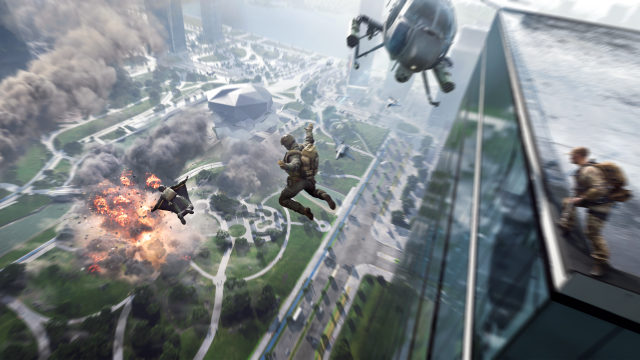 Last one off the roof has to buy a round of Battlepasses!

Also featured is a new gamemode, Hazard Zone, a squad-based mode seemingly inspired by The Division’s Dark Zone and Escape from Tarkov. Entering into one of the game’s maps as a squad of four, you have to fight off opposing squads, as well as AI controlled opposing forces, to loot Data Drives. Extracting from the map alive will lead to new loot and resources, so you can be better equipped when going back in for another round of Hazard Zone. It’s a nice addition to the game, offering a decent alternative to the standard gameplay loop, but like the Battlefield Portal, it’s not strong enough to carry the dragging disappointment that is Battlefield 2042 as a whole.

Battlefield 2042 seems to have lost the sense of what made the series a special and thoroughly enjoyable alternative to other FPS games, attempting instead to create a canvas on which epic “Battlefield moments” can be crafted, but forgetting the sheer wealth of substance between them which made previous entries in the series so well received. Having spent so much time on the series throughout my time as a gamer, I found myself so frustrated with Battlefield 2042; not at the game, but moreso at my contempt at having to play it. We’ve been promised substantial downloadable content to support the game in the future, and patches may resolve some nagging complaints, but by then it may be too little, too late. Heaped with severe optimisation issues and bugs, Battlefield 2042 might be a title better avoided until the year it was named after.

Despite trying to present itself as an advancement of the series, Battlefield 2042 instead feels like a severe dumbing-down. The Battlefield Portal offers some familiar fun, but it’s just not enough to warrant buying the game.

Battlefield 2042 Launch Update and Road Ahead

the body of your target but it still have a good control for a good game.

In my opinion this game is pretty