Between Me And The Night Review

Between Me And The Night is an action adventure game that explores the depths of mental health, and surrealist themes. Developed by Raindance LX , a small new development team from Portugal. Considering this is their first title, they sure have tried something a little different.

Between Me And The Night centers around a young red-headed lad that must overcome his fears in order to progress through his life. The game begins with the protagonist being sucked into a games cabinet, signalling from the very off that the game is going to be centered around the protagonist’s loose grip on reality. After playing a short mini-game inside the arcade machine, you are back within the house.

The game then sets you free, leaving you to explore and interact with the environment as you wish. From the very start, the surrealistic themes are prevalent. Parts of the house warp, items fall and there is a palpable oneiric atmosphere to your surroundings. Characters you meet are more like ghost-shaped projections rather than humans, further emphasising the protagonist’s inability to distinguish between reality and his imagination. 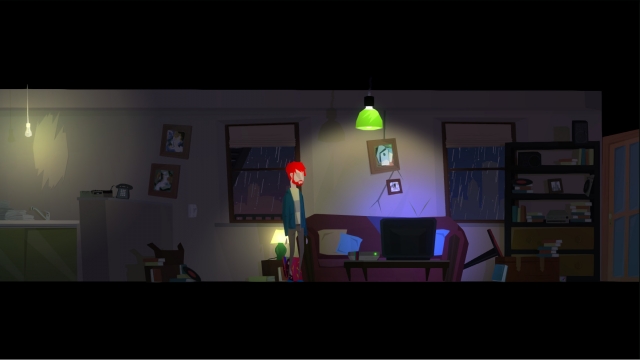 Between Me And The Night follows the protagonist from childhood into his twenties, touching upon the various mental health issues that are common in the different age brackets. Subjects such as bullying, loneliness, friendship and insecurity are all touched upon in the game’s deeper lore. It’s rare to see a game commit to mental health so much, with many people finding it quite an awkward subject.

The gameplay itself is point and click inspired, with players needing to piece together items and clues within the environment in order to move on. This can range to very obvious to incredibly vague sometimes. Between Me And The Night is the first game in which I’ve had to contact the developers for help on how to progress, I’d often get stuck for large periods of time without any clear way to progress. Just a few tiny nudges in the right direction would make the gameplay a little more enjoyable, and lead players to make logical conclusions rather than just trying anything to see if it works.

Aesthetically, the game is stunning. It has a very hand-drawn look about it, almost as if a child had drawn out their dreams onto a piece of paper. The art style adds perfectly to the surrealism, making monsters look like something straight out of a nightmare. The sound design is great as well, perfectly fitting the game’s themes. The same could be said of the soundtrack, as it fades in and out of gameplay, accompanying your journey into madness.

The game is pretty short, and could likely be finished in an hour or two if you didn't get incredibly stuck like I did, maybe I'm just an idiot though. I'd have loved to see a few more chapters chronicling the protagonist as he ages and deals with the various issues associated with age.

There are collectibles in the game to help pad out the length a little, you are able to collect stickers, toys, answering machine tapes and other various trinkets that all allow you to delve deeper into the world. These are a welcome side distraction, even if they do break the mood a little bit in places.

Each level also has its own monster; they are usually some normal animal or person, but they are often twisted out of recognition by the protagonist’s own anxiety. They can be a little bit annoying as you essentially have to sit around doing nothing until they disappear, although I did manage to find an item that made them leave me alone on one level. 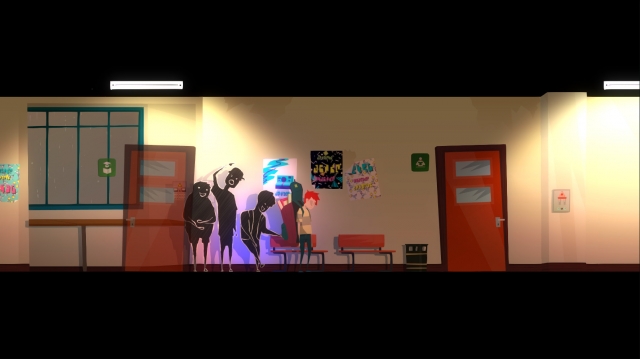 The game currently only lets you save upon completing a chapter; you aren't able to quit mid-chapter and resume when you return. I can understand why this decision was made as it was designed to be finished in a sitting. But the game is prone to occasional crashes and glitches, meaning players must redo everything from the beginning of the chapter. It isn't game killing but it is a minor annoyance if it happens often enough.

Between Me And The Night has some really original and thought provoking moments, it’s just a shame that the vague puzzles often trip these up. I have to commend the developer for committing to mental health issues so well as it is something that isn't touched upon as much as it should be.

If you can get over the occasional crash, and awkward puzzles, Between Me And The Night is most definitely worth a few hours of your time. Just be ready to watch a few Let’s Plays if you get stuck.

Between Me and The Night (Reviewed on Windows)

Between Me And The Night is a game that challenges some tough subjects, mental health is not something that many developers delve into. It's a shame that clumsy and vague puzzle design hold the game back. It's worth a few hours of your time if you don't mind relying on guides to help your progression.

Between Me and The Night