So, you want to be a doctor, but don't want the spirit-crushing debt that comes with medical school? Or perhaps you aspire to the atrocities of Josef Mengele, but find the thought of being charged with crimes against humanity singularly unappealing? Well, today's your lucky day. DryGin Studios's Bio Inc. Redemption lets you wield a virtual scalpel in any manner you see fit. Join me, as I don my deeply unattractive surgical gown and prove once again that I'm not qualified to administer a cough lozenge, let alone perform surgery. Brace yourselves... there will be blood.

First off, you don't actually get to carve people up and toss their internal organs into a kidney bowl. Things are not quite so... visceral. Bio Inc. Redemption mostly involves clicking on things. A lot. If you've ever played Ndemic Creations' Plague Inc. Evolved, then you'll know what to expect. Click to harvest resources, then click again to strategically expend those resources in a way you believe will most efficiently achieve your objective. While Plague Inc. Evolved required you to engineer a pathogen capable of wiping out the global population, Bio Inc. Redemption, despite a virtually identical gameplay mechanic, demands you make a choice -- life or death. Will you use your skill as a physician to diagnose, treat and ultimately save? Or will you travel a darker path, experimenting with a catalogue of deeply unpleasant afflictions in a concerted effort to terminate your hapless subject? As you may have guessed already, going the death route is infinitely more gratifying. 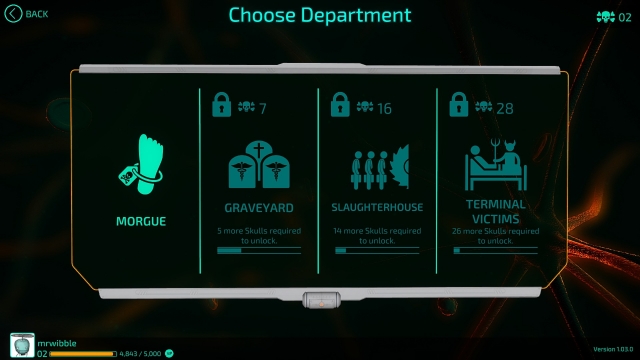 Right... so not so much Grey's Anatomy as Grey's Horrific Dismemberment.

To start, you create your unwilling subject by selecting their gender and giving them a name. (I chose a man and named him George Osborne though, in retrospect, Jeremy Hunt would have been a more suitable candidate.) With that sorted, the (operating) theatre of pain begins in earnest. In the centre of the screen is an impressively animated representation of your subject. Arrayed on the left is a list of critical biological systems (respiratory, nervous, digestive, etc.) and on the right, sits a recovery gauge and a selection of diagnoses and treatment indicators. After a few seconds, the systems will begin to light up. As you click on each system, your subject changes accordingly via a series of detailed anatomical overlays -- so selecting the skeletal system displays a skeleton; selecting the respiratory system displays a pair of lungs, and so on. Highlighted systems indicate an available resource. With a system selected, bacteria and virii begin to intermittently appear. Clicking on these biological nasties and holding down the left mouse button will harvest them, which in turn earns you 'bio points'. Once you've accumulated enough bio points you can open up the 'bio map' -- a veritable cornucopia of pestilential ailments and horrible, crippling injuries. Here's where things start to get interesting.

There are three tabs on the bio map -- diseases, risk factors and recovery. The diseases tab displays the same biological systems found on the main screen together with a variety of conditions relating to the relevant system. These range from the mild (insomnia) to the critical (leukaemia), and they all have an associated bio point cost, and in some instances, a dependency. Triggering hair loss, for example, will cost you much less than inducing a full-blown coronary. The risk factors tab contains a selection of pre-existing conditions or lifestyle choices that influence how resistant a subject is to your sadistic ministrations. Is your subject a morbidly obese nymphomaniac, or a malnourished senior citizen? Or both? (Think about that and try to keep your lunch down.) Finally, we have the recovery tab. Spending freely here will allow you to inhibit your subject's recovery. You could give them an irrational fear of hospitals. Or further stack the odds in your favour by decreeing all medical personnel to be both slow and incompetent. The more bio points you have to spend, the bleaker your subject's prognosis. Various upgrades are also on offer, provided you meet certain predefined criteria. 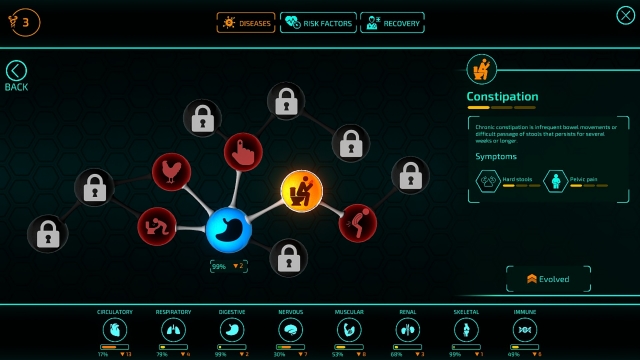 You too can force some hapless soul to spend half his life on the bog.

So, you're merrily harvesting bio points and frittering them away on male pattern baldness and urinary tract infections. Accordingly, your subject's critical systems are beginning to exhibit signs of deterioration. From all the moaning, thrashing about and projectile vomiting, you can safely conclude the gastroenteritis is coming along swimmingly. But it wouldn't be much of a game if you had everything all your own way, would it? Never fear; things get more complicated when you factor in lethality. Each affliction has a severity rating. While mild constipation is nothing to worry about, severe chest pains are cause for concern. Thus, if you opt for the big guns right out of the gate, you're going to send your subject scurrying off to his local GP in short order. As soon as doctors get involved, they immediately busy themselves working to diagnose and treat the numerous maladies you've so generously bestowed upon your victim. Once their steadily declining health hits 50%, they're admitted to hospital for emergency treatment. At this point, you're racing against the clock. If the recovery gauge reaches 100% before you're able to successfully terminate your subject, it's game over. (The life path is essentially identical, except you're attempting to save your patient before the AI terminates them.)

It must be said, you spend the majority of your time staring at the same screen, the gameplay is fairly simplistic and repetitive (click on stuff... then click on slightly different stuff), and there's not much in the way of depth. However, experimentation pays dividends, and the game does reward a certain morbid ingenuity. I christened my preferred strategy "the iron fist in the latex glove", where I'd insidiously weaken my subject by targeting his immune system first or inflicting a handful of minor ailments before going for the heavy hitters once I had him vomiting blood and practically comatose. If you can completely compromise one system, damage to remaining systems is exacerbated, and it's not long before catastrophic organ failure is unavoidable. As you progress, you earn small amounts of XP, all of which can be spent on boosters. Boosters further tilt the odds in your favour, but in a way that compliments your play-style. Want diseases that are 10% more potent? Done. Want hospital staff to compromise patient care by taking strike action more frequently? Done. It's entirely up to you. 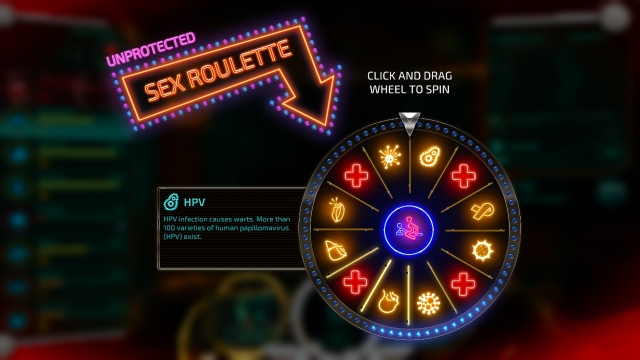 Despite its somewhat macabre subject matter, Bio Inc. Redemption is surprisingly informative. Thanks to time spent spinning the 'Unprotected Sex Roulette' wheel (it's like Wheel Of Fortune, except instead of winning a Toyota Corolla, your promiscuous subject wins a scorching case of herpes), I've learned a lot about the long-term effects of syphilis. The user interface is simple, clean and intuitive to navigate. Graphically, there's nothing here that will have you picking your jaw up off the floor, but then it's not really that kind of game. Soundwise, you're treated to a variety of hospital type sound effects (electronic beeping, the sound of a bloody scalpel being tossed into an instrument tray), along with a selection of groans, hacking coughs, and other bodily functions that don't warrant further description. The music is largely dependent on your chosen path, death being all ominous and foreboding, and life being tense and full of urgency (a bit like an episode of Casualty). In short, everything you'd expect but nothing particularly noteworthy.

If you fancy a change of pace the game features both a sandbox mode, where you can adjust various criteria according to personal preference, and a multiplayer mode. Multiplayer pits you against a human opponent, one of you as benevolent physician, the other as homicidal scientist, in what amounts to a battle of speed, efficiency and animal cunning. It's a case of "I'll see your hormone replacement therapy and raise you a Crohn's disease. And then, Giles, we shall retire to the study for brandy and cigars." It's a pleasant enough distraction, but given its similarity to the single-player experience and the general lack of variation, not sufficient to hold your attention for very long. 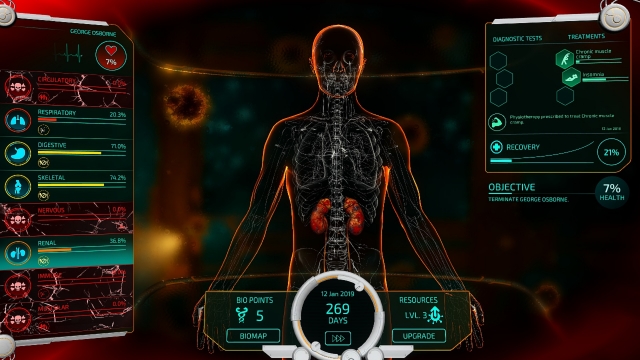 Meet George Osborne. Thanks to my efforts, he's not a well man.

And that just about sums up Bio Inc. Redemption. It's fun for an hour or so, after which it all gets a bit samey. It's the kind of game you'd probably play on your mobile while you were waiting for a bus, or stood in the queue at the supermarket. Which is not to say it's a bad game per se, it's just not terribly interesting for any length of time. I learned a lot, and it adequately catered to my ghoulish sensibilities, but it's not something I envision myself returning to unless I'm really at a loose end and completely out of options.

Once the novelty of being allowed to give someone testicular cancer wears off, it's a rather uninspired affair. Clicking for hours at a time will likely result in carpal tunnel syndrome, which is the price you pay for being such a dreadful sadist. Shame on you.