Black Book is an interesting game. One that blends multiple gameplay styles into a cocktail of intrigue, before splicing it up with a tried and tested narrative. In Black Book you control a young girl named Vastilla. After losing a loved one to mysterious circumstances, Vastilla seeks out the Black Book, a book that can grant any one wish to whomever can break its seven seals.

Black Book plays heavily into the theme of how far a person would go to recover someone they had previously considered lost. It’s not a theme that is particularly unique, but it’s one that’s found itself entwined with Slavic folk tales unfamiliar to myself and likely those who play the game. Opening my eyes to a world of myths I’d never read before gave Black Book an interesting narrative that was carried along in the wind of an artful world and solid gameplay. At times, I found it hard to really engage with Black Book as a whole. Exploring the environment, its narrative, the way it plays, they all feel like isolated blocks of media. Black Book is strongest in its story. Interacting with characters, learning about them and their culture is fascinating but it feels disconnected from the rest of the game. Exploring the world is dealt with a simplistic point and click experience in mind, yet you’re only allowed to move down a specified path. Being put in these environments, only to realise you can move along a particular line or select certain items was disappointing. Gorgeous landscapes are turned into a canvas because there’s no real option to explore it more. It’s a shame to have put such a well-crafted world as an environmental backdrop, whilst you play around in the puddle of beige in front of it.

On top of that, the game relies heavily on inspiration from Slay the Spire when it comes to combat. Turn-based card games are great fun, and I don’t think this one is different. Black Book’s biggest issue is how closely it resembles the experience of Slay the Spire. From working vertically through point-to-point combat scenarios, to the way fights play out, it's practically the same game at times. When you find yourself in the same pot, the comparisons are never going to dissolve, and when compared to Slay the Spire, Black Book just isn’t as strong as its counterpart. Which isn’t to say it’s bad, or even unenjoyable. The issue at the heart of the similarity is how much easier Black Book is to conquer. You can get away with making mistakes in combat or building bad decks, which completely defeats the point of the core gameplay loop. I think a lot of it comes from how easy it is to build a versatile deck. Despite appearing shallow at first, there’s actually a lot of enjoyable options to rotate into use. With such a vast number though, it’s easy to build something that has you prepared for anything, even if you get there accidentally. Black Book clearly emphasises story as being the key, but scaling back the difficulty of the game turns into a tick-box chore by the story’s end.

Happily though, the dedication to writing and lore building is fantastic. It was slow to hook me in, because the setup is fairly generic, but the introductions to old folk tales and myths are brilliantly done. Part of the Black Book narrative is helping out villages with their paranormal problems. Answering questions or advising them correctly gives the character a boost, but it relies on the player paying attention to dialogue and reading encyclopedia entries to understand what the poor villagers are describing. Everything you do comes with a sin rating. Your handling of certain situations, if deemed naughty enough, will increase your sin by a certain number. Black Book offers several endings, all of which are affected by the level of sin you’ve raised throughout the game. 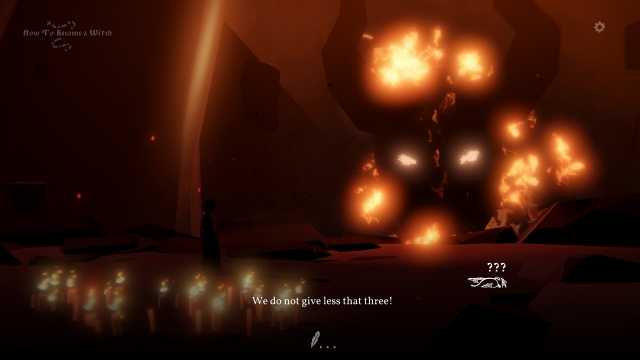 Black Book offers good value too, clocking in at around 20 hours for a full playthrough. Differing endings, plus new deck building options will be able to entice some players back for a second run. Additionally, the whole game is fully voice-acted in both Russian and English. Both do a fairly good job. Playing in Russian with English subtitles would likely give you a more immersive experience. The English isn’t bad, but it does suffer from the weird problem where random English slang is added to the dialect, which I’ve never understood why people do.

After hitting the credits of Black Book I couldn't help but sit back and appreciate the very good experience I had with the game. At times, the game feels a bit too easy, but with a lot of time in other deck-builders, it may just be an experience thing. There’s a gorgeous world to uncover, even if exploration can be limited, and the whole package is accompanied with fantastic writing from start to finish. Black Book might be the kind of game you add to a wishlist and forget about for years, but the replayability adds such good value that everyone should be giving it a second look.

Morteshka’s second outing was a home-run. Black Book is a superbly written title, lifting the lids of a host of Slavic myths that were likely unknown to many of us previously. Gameplay can be easy at times, but the rest will keep you locked in.