Daedalic Entertainment's latest offering promises a rich world filled with RPG goodness, from numerous stats to level up at your whim, to sprawling hex-based battlegrounds. High hopes, then, for the German developers who have not only earned their stripes with the delightful Deponia series of RPGs, but also with Blackguards being their third offering set in the surprisingly popular Teutonic pen and paper Dark Eye universe.

Blackguards asks the question “What happens when the only hope of a threatened world lies not with heroes in shining armour, but is placed in the hands of a band of misfits and criminals?” Throughout the course of Blackguards there are people to see, places to go and side missions to accept, all of which serve the purpose to pad out the characters' personae as much as the campaign itself. It is a long game which will take much time and skill to master and finish, but most of all the one trait you as a player will require is endurance.

While Blackguards looks the part, grabbing the handles of the strategy RPG resurgence bandwagon with both hands, cracks begin to appear quite early on, with small chinks in its armour here and there that bring the whole game crashing to its knees. The first few missions feel well paced and fun to play. After choosing your character class from a limited, generic selection of Hunter, Warrior or Mage, the story naturally unfolds as you are charged with the murder of a friend, and upon escaping prison with a band of lawless miscreants, you set about finding the real killer somewhere in this dangerous world. Your new prison friends have their stories to tell, each just as dark and horrific as the others'. This is a game that offers a fairly interesting mature storyline and, depending on what side quests you undertake, weaves your party's stories in amongst your own, revealing more about your fellow Blackguards as you progress.

However, you can't polish a turd, and no matter how deep, interesting and genuinely dark the story might be, in my experience an RPG is made or broken by its battle and menu systems, and Blackguards fails at both. Let's start with the battle system. Taking its cues directly from The Dark Eye rulebook, each weapon and stat you acquire and improve affects your attack, defense, etc. which all hinge on dice rolls. A weapon that has '2d6 +3' attack power would, theoretically, do 5-15 points of damage, yet the damage done always appears to be the same value each time with the occasional missed attack. For a game to weigh so heavily on its dice-rolling roots, the whole random ethos of rolling dice is completely absent from the entire campaign.

Artificial intelligence is nothing short of basic. Enemies have one tactic, and one tactic only, and that is to crowd around one of your heroes and attack, regardless of environmental effects such as fire, and are totally bereft of any tactical thought. Enemies will often stand in a fire to attack you, only to sustain much damage turn after turn. With such great effort going into creating inventive and dynamic battlefields, it's a pity the AI-controlled characters don't interact with it in the manner it deserves. And within Blackguards there are 180+ battlegrounds on which to fight, each more sprawling and dangerous than the last. At one point you'll find yourself battling through cave lice in the middle of a cave-in, with rocks that'll fall randomly and usually kill the unlucky guy standing on the wrong hexagon. Next you'll be fighting your way over a bridge with enemies throwing obstacles in your way, and being picked off from afar by long-distance archers. Battles are of course turn-based, and depending on the relevant stats you can, each turn, move a certain number of hexes across the map. Moving too far will relinquish your ability to perform an action, like attack or use an item. Interacting with the right objects can make boxes catch fire and chandeliers fall, big tactical advantages that can swing the battle in your favour. Spells can make boxes near enemies catch fire, or burn clusters of enemies - there are a lot of tactical decisions unique to the terrain found with each map.

However, as we move into the menu systems, it's clear why Blackguards is hard as nails for the uninitiated. It tries its best to guide you, but the bottom line is that if you don't invest your AP (Adventure Points, naturally) into the correct talents, abilities, spells, etc for the right character, you're screwed. Which begs the question – why are so many facets of your clan's attributes upgradable? Attempting to craft, say, your warrior into a jack of all trades, namely making him tasty with a bow and arrow as well as his sword, and getting him to learn a spell, ends up making him totally crap at all disciplines. By the time you've worked that out it's too late. You're seeing the 'Retry Level?' option too many times, and your last save is from many fights ago. By you I of course mean me. I did that, more times than I care to remember. Blackguards is a hard nut to crack.

When it clicks, Blackguards is quite good fun, and the story is captivating enough to keep your interest bobbing along throughout, it's just its core gameplay failures on and off the battlefield, and unforgiving difficulty spikes, are pretty off-putting. With the body of a game as nicely presented as Blackguards, with entertaining combat environs and a few decent sordid and depressing tales within, it ought to have had a decent skeleton within to keep it dropping limp to the floor. But alas the downright dumb AI and large selections of customisation options (which you can't really use if you want to see the latter stages of the campaign), really hamper a game whose parts are greater than its whole. 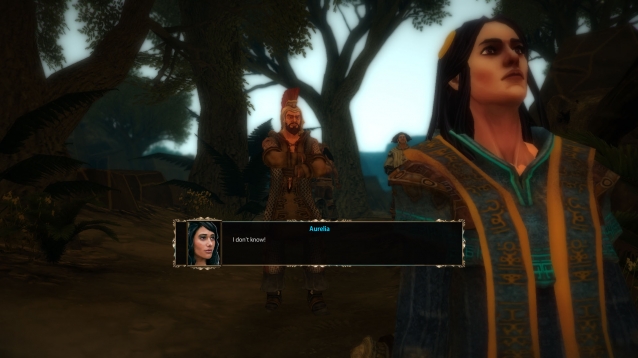 At best Blackguards is a valiant effort, and after accepting it for what it is, I found it to be somewhat entertaining, enjoyment mainly stemming from a good sense of accomplishment from overcoming not only the level, but the game itself. Winning feels good, like you really earned it, and a nice new weapon or juicy bit of story is your reward. You just have to work with Blackguards' unique mannerisms to eke out most of the enjoyment, but should it really take this much effort to enjoy a game?

Goblins shoot fireballs from 30+ hexes away - at 99% skill (cmon, Goblins iwth 14+intuition, courage and constitution and 13 ranks in fireball?) . 98%  spells fail at least once every map. Enemies arrows also have no range limitation, and hardly miss. 93% spells fails once every 5 castings. 95% attacks get parried, no matter if you have 18 in attack skills and is attacking a 10HP goblin. He will parry. You wont.