BlazeSky is described as a space opera action RPG, which, in my opinion, is a pretty ambitious description. When I think of the space opera genre I think of epic, vastly-entertaining titles like Dune, Firefly and The Fifth Element. Game wise it calls to mind series like Halo, Destiny and EVE Online. So calling BlazeSky a “space opera” gives it a lot to live up to, and it gives it a good go. 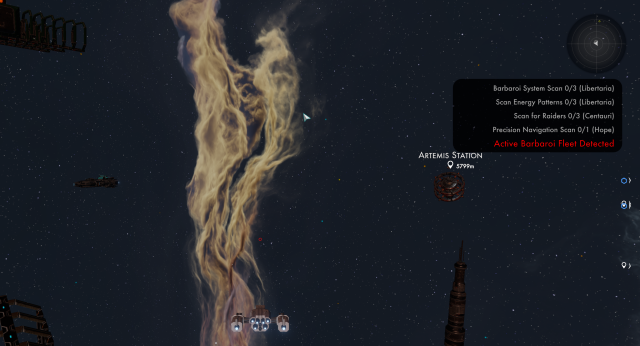 The game is set in a 3D environment, which is very beautiful. The star systems you explore are all handcrafted and you can tell that a lot of love and labour has gone into making everything visually appealing. Navigating your way through space with the vivid colours of nebulas in the distance and the ethereal glow of nearby planets, makes the universe a joy to explore. The only drawback is due to the galaxies being handcrafted rather than procedurally generated, there is no variation in fresh starts, the space will always remain the same. This does have an impact on the replay value, as discovering new things through exploration is arguably one of the most interesting aspects of BlazeSky, especially when everything is so pretty.

The set environment would be less of an issue if the questing experience was super engaging, which sadly, it’s not really. There’s no particularly compelling narrative, nothing to give meaning to doing the missions dotted around. It’s essentially, pick up mission, travel to location, scan/kill something, hand in mission. I noticed on several occasions there were issues with broken text, where words were needlessly split in two and on separate lines. I understand though that the game was not built by a huge team and proofreading that much copy is a daunting task. You’re able to tailor your responses to the quest givers which offers some level of player agency/personality but in my time playing I didn’t experience any pay off for that in terms of affecting the story. 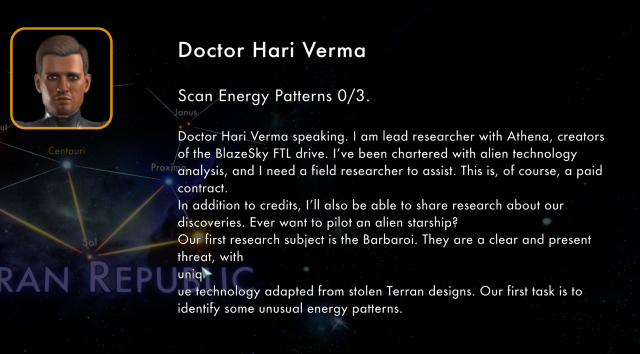 You can engage in battles and have your ship be damaged, but an emergency jump is activated before you’re truly destroyed. There is no consequence to being defeated, it’s essentially a reload at your spawn point. For me it meant I had no sense of urgency or need to be careful, just hey ho, let’s go again. Early game you’ll find there is no point in trying to actually tackle combat, because everyone and everything else is so much more powerful than you are and it stays that way until you upgrade your ship. I just found myself practising my “evasive manoeuvres” whilst scanning my targets until I inevitably took too much damage and respawned, just to go back and scan the others. No challenge to motivate you, just monotony.

You gain tech research points as you scan things during missions, which allow you to unlock the aforementioned upgrades and you receive credits when you complete mission objectives. You can use these currencies to unlock new tech, or purchase upgrades and consumables like missiles. There is a lot of stuff to unlock, but you’re essentially grinding out cookie cutter quests to access them, which feels like an unsatisfying use of your time.

I have to give some credit to the voice actors because the characters you interact with for these missions are very well voiced and generally well designed, although a couple of them are somewhat questionable. The sound design in general, is actually very well done and Double Robot has done an excellent job of making you feel like you’re truly in space as you are roaming around. Of course, in space realistically you can’t hear anything but we all know what a good space opera should sound like and this sounds like a good space opera. The tug of sound as you leap into hyperdrive or the sinister ticking of the geiger counter and the echoey drone of trying to survive in a comet field - it’s all just a truly great auditory experience. Alongside the sometimes beautiful and ethereal and other times epic and triumphant music I’m very impressed overall with the sound design in BlazeSky have no real criticism to offer up in this area.

Where I do have some criticism is on the topic of controls because the game is not intuitive to play. As mentioned previously, the environment you explore is a 3D one, but your plane of movement is actually 2D, making the game a 2.5D adventure. So you can turn left and right and move forwards and backwards, but not up or down. As you turn to the side your ship will bank, which actually seems very realistic but it does take some getting used to. That’s fine, but the whole system doesn’t really make sense. You can zoom your camera in and out using the mouse wheel, but you need to use the square brackets to turn the camera around. You use the directional keys to fire your turrets which requires you to hold them but also you can use the space bar which for some reason fires them instantly. Originally you could only use Q and E to scroll between abilities and hold shift to activate which was very clunky but mouse support for this has been added so you can now press and hold the left mouse button to activate your ability and select the ability with a click of the mouse wheel which is a vast improvement. Unfortunately this mouse support is not carried through to the map and you have to slowly move across the web of star systems using WASD before selecting the one you want by hovering over it and pressing your space bar. The same is true in dialogue exchanges where you hold the corresponding key on your keyboard to select the response you want to give. For either of these situations it would just make so much more sense to be able to use your mouse to click on what you want to say or where you want to go. I’m no developer though so I have no idea of the work that it requires to build a feature like that. The controls aren’t a deal breaker and you do get used to them over time, they’re just a bit frustrating.

Overall BlazeSky is, well, it’s okay. Visually and acoustically it is fantastic and it has so much potential to be a great game but it’s let down by clumsy controls and a lacklustre narrative. It might be worth a play if you really enjoy space-orientated titles and want to fill a little bit of time, but it’s sadly not the gripping, epic adventure I was hoping for.

A potentially great game with excellent visuals and sound design let down by awkward controls and a humdrum narrative.