Something a lot of videogames set in courtrooms lack is a real sense of guilt: every one of them is about clearing the names of innocent people falsely accused, and not about weaseling your way out of serious charges. This might just be me, but the latter sounds much more interesting: manipulating evidence and testimony to shift all blame to someone else and get away scott free. This is precisely what Bohemian Killing is about: A beautiful courtroom drama about a rich Gypsy inventor in a steampunk nineteenth century Paris correctly accused of murder.

The game begins with you reliving this event, serving as a kind of tutorial that introduces the main mechanics: viewing the pocket watch, manipulating time and using items. This is great the first time you play: it’s a very proactive tutorial that holds your hand just enough to teach you what you need to do all set to Bohemian Killing’s amazing score in it’s faithfully designed rooms. However, you have to play it every time you start a new game - which you’re encouraged to do as there are multiple endings and you will need multiple attempts at the game to work out what to do. This is very grating because there’s no way of skipping it, and after the fourth time watching it I got very bored of it.

After a brief loading screen you’re dropped inside a cage in the Palais de Justice, and the prosecution reads out their case. It seems pretty strong, which makes sense since you actually did kill Marie Capet, the victim of the crime. You then begin your testimony, and the game throws another loading screen at you to take you back to relive - and retell - the events of that evening. This is how most of the game plays out, as a flashback that is narrated by the incredible Stephane Cornicard, who you might recall as Napoleon Bonaparte in Napoleon: Total War.

Cornicard’s narration as Gypsy inventor Alfred Ethon comes thick and fast, detailing every little thing that you do. At first, this is pretty awesome: The game reacts to basically everything you do, from looking out a window to choosing the stairs over the elevator. However, as a game that is meant to be replayed, you’ll hear some of those lines a lot and they start grating despite their quality. It also becomes quite annoying when the judge interrupts your testimony to ask some questions, partly because these are just glorified cutscenes and partly because in trying to skip them, the game bugs out slightly.

As a means of getting around the issue of rewatching parts of the game that the player has seen before, Bohemian Killing allows you to skip individual lines throughout the testimony, and entire scenes in the courtroom. The individual lines skip oddly though, particularly if an animation is tied to it. When the judge interrupts you, he actually appears in the flashback, but if you skip through those lines he often won’t appear until after the section has finished and then he’s just there for a few seconds before unceremoniously vanishing. Skipping the courtroom sections is even more annoying, since they’re preceded and followed by loading screens. This often meant that I’d find a piece of evidence I needed for the ending I was chasing, load into the courtroom, skip that section, then go straight back into a loading screen before I can continue.

Speaking of annoying features, Bohemian Killing takes place in real time. The events listed take place over the course of 3 hours, so you need to find a lot of things to do to burn some time to do events in the correct order. Scattered around the street are things you can do, but they’re fixed time periods of about five to fifteen minutes. This is especially annoying when you need to make five minutes pass quickly, because the only one I’ve found involves you failing to shave and causing the same amount of blood to cover you as a bar brawl, a near-fatal head-wound or a murder, and then you have to either change your clothes or bathe, both of which take more time. Not being able to control how long you read a newspaper is very frustrating, and God forbid being early or late to anything, because your testimony will instantly fall apart. 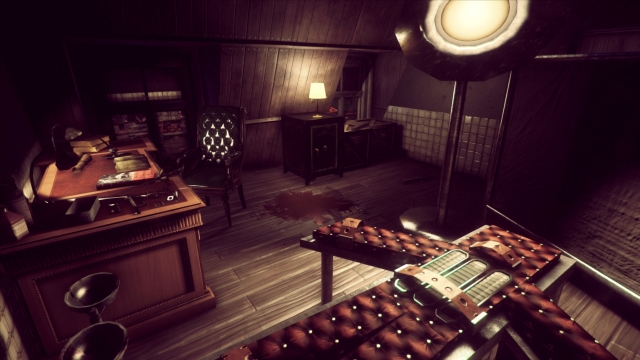 Only the French would put cushions on a torture machine...

The blood, by the way, is a screen effect that puts a static image that’s slightly translucent over the camera. For the most part, nobody even notices that you’re supposedly covered in blood outside of a couple preset instances. You can also get drunk, which just blurs your vision for a random amount of time. Ethon doesn’t hold his drink very well, it seems; having some leftovers left me tipsy for three in-game hours.

When it comes down to it, this game is easily cheated. It doesn’t seem to matter what you actually do outside of a few key events, and I got an innocent ending after straight up admitting to killing Capet. I couldn’t work out why, though I presume it was because I found a piece of evidence that overwrote what I did afterwards in the verdict. The only ending that I think is promised for doing something is the escape ending, which you can get very easily at three points throughout the game, no matter what you tell the court.

Bohemian Killing is a promising but ultimately disappointing game, a great story and world let down by frustrating - and sometimes buggy - mechanics.