There were many reasons to worry about Bombshell over the last two years. It started life as an ill-fated Duke Nukem sequel, and was almost immediately shut down by Gearbox, the owners of the Duke IP. Rather than scrap the game entirely, developer Interceptor Entertainment and publisher 3D Realms were allowed to take their work and rebrand it as a new product. A supporting character was bumped up to the lead - Shelly “Bombshell” Harrison.

A teaser trailer came soon after - probably the worst trailer I’ve ever seen, displaying a scantily clad Shelly as she watches the alien abduction of the President of the United States. It was truly awful. I and many others feared that this could turn out to be a horribly misogynistic and exploitative game, with the memories of how women were portrayed in the Duke’s last outing flooding back. After going quiet for some time, Bombshell resurfaced with Shelly’s new fully clothed design, though still with enough cleavage on show to titillate the masses. 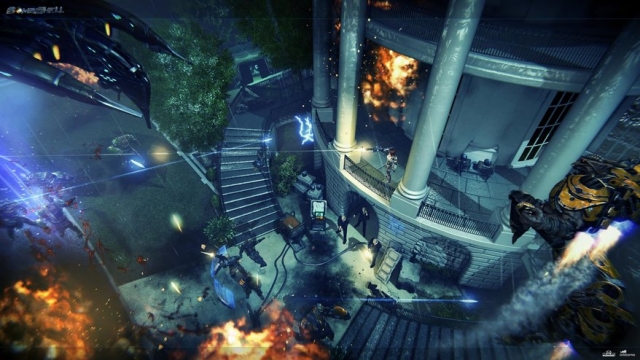 Bombshell is an isometric action-RPG; a dungeon crawler with big guns and fast quips. The game plays like a twin-stick shooter, with the waves of attacking enemies having you dance around the various arenas, dodging projectiles and pumping lead. Typically a style of game played from a top-down perspective, it took some time to adjust to the isometric angle. Despite the term “twin-stick”, Bombshell plays better with a mouse and keyboard; your bullets have a small hitbox so the additional accuracy of a mouse is noticeable.

Shelly’s primary objective is to rescue Skye, the United States President, from an evil cyborg scientist who has enlisted the aid of an alien race called the Kyrr. An ‘80s action movie in videogame form, you start by storming the White House before chasing Skye’s abductor through a portal. Pursuing the President takes Shelly through various locales, the key two being the Kyrr’s homeworld appropriately named Kyrron and the crystalline planet of Zeroth.

This amounts to little more than a lava level and an ice level, but the context is somewhat original; Kyrron is a decimated planet breaking into pieces above a star, but falling into a giant ball of flame instead of molten rock doesn’t make much of a difference. Interceptor Entertainment plan to turn Bombshell into a series, and the attention paid here to building interesting worlds should hopefully carry across into later titles, creating a fully fledged universe. 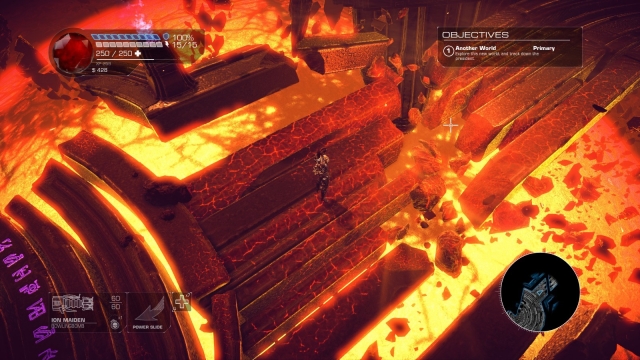 It’s clear too that Interceptor had been designing Bombshell to be a Duke Nukem game, with all the violent executions and cocky dialogue you’d expect. Clear too with all of the hidden, and some not-so-hidden, references to other videogames: a soldier that warns you that “it’s dangerous to go alone, so take this”, a corpse possibly belonging to Marvin the Martian, and even a cheeky reference to the Duke himself.

I made reference to Bombshell feeling like a dungeon crawler, and this came from the abundance of side quests. Not content with merely being a corridor shooter, the large areas of each chapter hide many additional paths. Quest givers can be found, and some objectives can just be stumbled upon while exploring. Many ask you to find certain objects and return them, encouraging further exploration. These secondary missions, along with challenge rooms that can be reached through certain portals, reward you with experience points.

By levelling up, you can assign points to skills that Shelly can use such as a slide to dodge through enemies, a charge punch to close distance, and a shield but you can also upgrade your health, armour, and energy, required to use the aforementioned skills, with these points too. On top of this, levelling up allows you to upgrade your various weapons in the typical areas. A currency collected in the world and from dead enemies can be spent, your current level permitting, to increase the damage, the reload speed, the clip size, etc.. As you gain levels in these weapons, you make a choice of two secondary fire modes to pursue, sometimes different entirely to how the weapon usually functions. 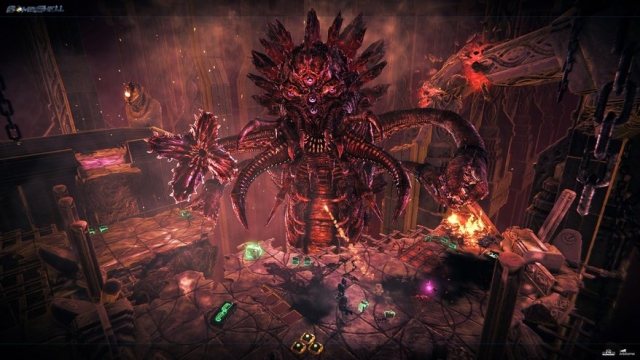 The starting weapon is the Ion Maiden, a burst fire laser rifle, which I upgraded to have a ricocheting shot. Though initially weak, and as is the case in most shooters, through upgrades it grows to be one of the most powerful. Throughout the story you collect new weapons, ranging from a minigun and a shotgun, up to a flamethrower and a rocket launcher - the usual suspects. Ammo is scattered throughout the area, and is occasionally dropped by enemies, but if things ever get dire, the Maiden never runs out. It holds a clip of 60, but will continue to fire lower damage rounds if that number hits zero.

Where Bombshell lets itself down is in its structure. The objectives of each chapter rarely expand to more than “Collect X keys to open the door” or “Reach the other side of the area”, and some may find this, combined with the hours of the repetitive combat, tiresome. It’s a fault I can’t ignore but personally had no trouble with. Bombshell succeeds, as I imagine it was designed to, as mindless fun.

I also have to mention the soundtrack, which I don’t usually do, but Bombshell’s deserves it. A face-blasting, gut-punching romp through hordes of aliens wouldn’t be the same without an accompanying heavy metal score. Before each chapter, over a static screen, a new track roars like an overture for the mayhem to come, and for the quieter moments, pieces reminiscent of Jack Wall’s atmospheric work in the first two Mass Effect titles set an appropriate tone, a true sense of dread and being trapped on an unknown world. 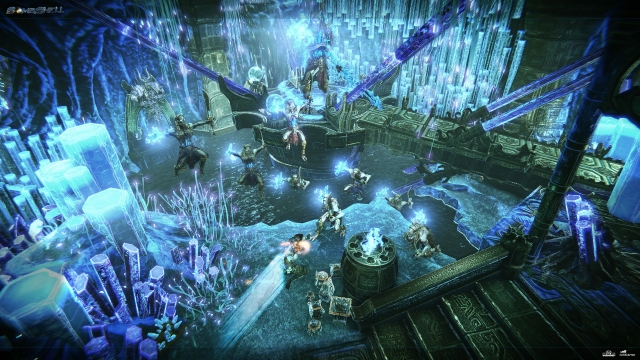 Elsewhere, an audial area that falls flat is the voice acting. Despite employing renowned voice actors Valerie Arem, of Persona fame, and Jon St. John, the voice of Duke Nukem, Bombshell is full of lacklustre performances. While the key characters are left merely dull and forgettable, the supporting cast are downright laughable.

Despite its problems, I enjoyed Bombshell as my expectations were already low. The story, clearly inspired by the cheesy sci-fi action films we all loved as kids, rarely engages but it doesn’t have to. Like those same films, it’s the lasers and explosions we’re really here for. That Bombshell survived both its lawsuit and the negative reception of its original form is a triumph, and is a strong first step for Interceptor’s new series.

Bombshell doesn’t seem to have gone down well with other critics, but I had a blast. Solid shooting backs up what I found to be an engaging gameplay loop. By no means the best twin stick shooter around, I had fun during the 8 hours I spent with it, and that’s enough for me.

Disagree with you on every point. Game is garbage. Deserves all the flak it has recieved.

Yeah, well, you know, that's just, like, your opinion, man