Fantasy RPGs seem to go one of two ways: you’ve got the brilliantly crafted world filled with interesting characters, an engaging story and fun gameplay to back it up. Or there’s the mediocre RPG that simply tries too hard to reach the aforementioned heights with far less resources, no interesting characters, a poorly penned tale and sub-par gameplay to round it off. Bound by Flame doesn’t break this mould, and instead sets a new wooden spoon-standard for mediocre RPG experiences. Like so many of its brethren it’s not a terribly bad game, it just lacks any flare and fails to find its own way in the increasingly overpopulated world of role-playing games. It’s also a prime example of a few terrible mechanics holding back the rest of the game design, and while many gamers could easily overlook the purely average overall package, these flaws are unavoidable.

It all begins on the wrong foot. After an impossibly clichéd intro sequence (something about ice lords and a war) and a laughably limited avatar creation screen, you’re thrusted into battle against a solitary undead enemy. It’s an interesting decision on the part of Spiders Studio to kick off the gameplay experience with the combat mechanic. Of course by interesting I mean completely moronic. Within the first 10 minutes of play it’s obvious that the combat system on offer in Bound by Flame is incredibly limited. There’s an attack button, a secondary attack button and a block button (at least to begin with); standard stuff, but where the game trips is on the rhythm and pacing of physical encounters. That first enemy takes many, many clicks of the mouse or pushes of a button to take down. He can barely fight back, but it’ll still take a number of minutes to finish him off. In hindsight, maybe this is just a friendly move on the part of Spider Studio to introduce you to the main theme of the game: endlessly hacking away at an enemy that poses little to no threat. There’s a danger of this single activity taking up the majority of your time playing the horribly short story (and only) mode. At only 15 or so hours, this isn’t a typical RPG in terms of overall length, and certainly fails to justify the full price tag. We’ve all had our fair share of ‘hacking the day away’ experiences and anyone familiar with the Diablo series will also be familiar with an achy index finger. Bound by Flame takes this finger-clickin’ goodness to a rather horrific new edge. There seems to be a disconnect between the health of the monsters you’ll fight and you’re hero’s damage, as just about every creature bar the most rudimentary requires a painful amount of button mashing.

This is one of those terrible mechanics previously mentioned, and it’s an issue that plagues the game from beginning to end. It’s not that the monsters are especially hard to fight, although some certainly are, it’s just that nobody wants to spend their whole time in-game slowly cutting away at one monster. This key issue aside, the game begins well enough for an RPG of this kind. You’re taught how to craft, how to use weapons other than your basic sword and how to swap between the two stances of battle (which we’ll get to later). The opening chapter also introduces Bound by Flame’s unique selling point: a demon that possesses the player character thereby giving him magical fire powers. He becomes...bound by flame, pretty much literally. The story is also set up properly and actually has some brief moments of hope before the fall later on. 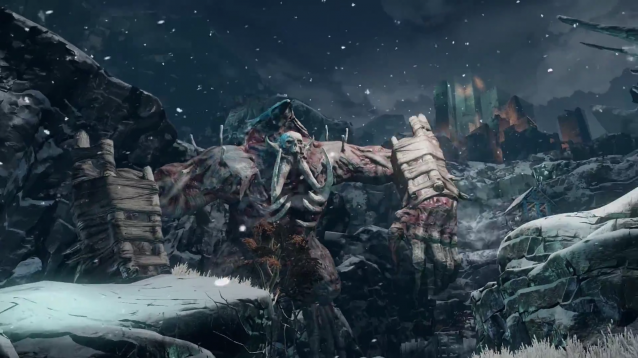 That story has been marketed as one of the key aspects of Bound by Flame, and while it is one of the stronger elements of the game, it lacks consistency to be a tale worth experiencing. The war between the ice lords and the people of the easily forgettable fantasy land is initially the main part of the story, but this ends up taking a backseat to the battle between the player character Vulcan and the Demon that has possessed him. The first half of the game builds up the story well despite a great deal of awfully written dialogue, but towards the end it seems to drop off as though not enough gameplay had been created to facilitate the story. The game essentially promises a tale filled with huge ice lord boss battles, well-developed characters and interesting moral choices, but in the end it’s far too short to achieve these aims.

Story isn’t the only aspect that’s cut short by the dreadful length of the game. Bound by Flame features a decent levelling system which sees players upgrading three core aspects of their character’s fighting ability: warrior, rogue and pyromancer. It’s an obvious attempt to buck the trend of assigning specific classes to your character. The warrior is your basic brute force class, using double handed weapons and standing strong against powerful attacks. The rogue uses dual knives, can implement a stealth attack and features a dodge ability, while the pyromancer sees Vulcan abuse the Demon within and use fire attacks like fireballs and a flaming sword. The first two classes do represent slightly different ways of approaching combat, so can be interesting to experiment with, while the pyromancer class is more of an overarching power. 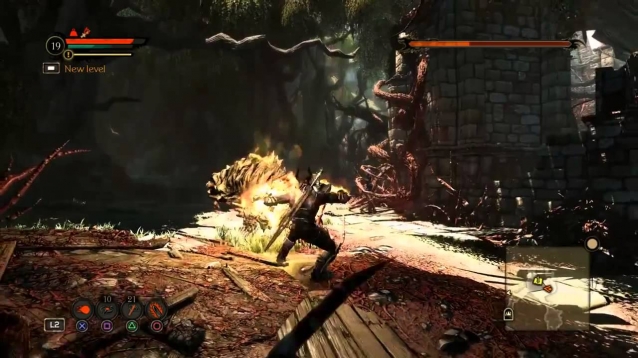 The main downside with this system is that the player is likely to spend most of their upgrade points on making one of the key classes more powerful rather than trying to balance out the two. Considering you can only use one or the other at a single time, it makes sense to assign points this way. An interesting customisation system is also used for outfitting your avatar. Most weapons and armour are found either out in the open field or in the shops of tradesmen, and while you can’t craft your own you can use materials to create improvements for this equipment. Crafting in Bound by Flame is basic but functional, like a lot of the game on the whole. Creating your own health potions, exploding traps and crossbow bolts from random loot is fairly satisfying, but by the mid-game it becomes easier just to sell equipment you’ve found and buy the things you’d otherwise have to craft.

The tradesmen with whom you can buy and sell this kit are found in the central hubs of each level. Rather than the open-world that most fantasy RPGs are going for these days, Bound by Flame relies on a hub-based system in which a central area (a town or camp generally) connects to various areas in which the main and secondary quests take place. It creates a sense of independence that doesn’t exist in a linear game but ultimately there’s nothing to do outside of the central zones other than complete the pre-assigned quests. The order in which you do things is about the only real choice you get, even then it can be tempting just to skip the often mundane secondary quests. 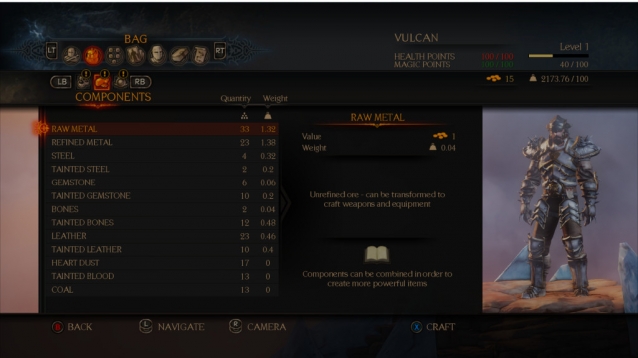 This would all be bearable if Bound by Flame was set within an enjoyable or interesting world, but this is simply not the case. The setting is ripped right out of fantasy 101 complete with marshlands, ice castles and a mysterious witch with outrageously large breasts. Despite the huge amount of dialogue that can be accessed through one to one in-game conversations, there’s actually very little revealed about the world itself. Most of what is told is repeated from character to character, only in slightly different tones. There are a couple of amusing characters along the way and some good voice acting accompanying them, but these only help to put a bow on the turd that is the in-game dialogue. Most players will likely go through the game wondering if they could write better dialogue, and they most likely could. It’s wooden, heaped in cliché and really takes the player out of the setting. The awful lip-syncing doesn’t help matters.

Bound by Flame has moments of hope and some fun aspects, namely the regular boss battles, the slew of amusing and interesting enemies and the excellent soundtrack. On the whole though it’s not a game worth playing, even when it’s released on PS4 (you’ll have to wait until Dragon Age: Inquisition for your RPG fix). There are a serious lack of new ideas on offer here, and even the more original concepts like the class division and hub-based gameplay fail to impress. What’s more, the promise of a well-developed story that forces players to choose between good and evil was completely off the ball; the glimpses of quality at the beginning are firmly ruined by the remainder of the game. It sums up Bound by Flame well that although you’ll be deciding which end of the moral spectrum to play throughout, you’re still presented with the same options by the end of the game. This is a badly planned game that clearly suffered from time, management or technical issues during development and is best avoided.

Bound by Flame (Reviewed on Windows)

It sums up Bound by Flame well that although you’ll be deciding which end of the moral spectrum to play throughout, you’re still presented with the same options by the end of the game. This is a badly planned game that clearly suffered from time, management or technical issues during development and is best avoided. 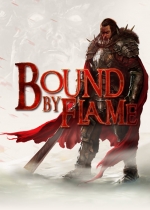