Every once in a while I get to try out a game that really changes the conventional way of doing things. Brain Meltdown Into Despair has the player controlling two different characters at the same time. The left Joy-Con controls the purple character with the fuzzy ears, and the right controls the yellow with the bird cloak. There is the option to play cooperatively with another player locally if you want a multiplayer experience; though I guarantee you there will be yelling and frustration every time someone dies. There is no option to have a second player join you unless you select two players right at the beginning, they can’t jump in on a one-player [save] file. 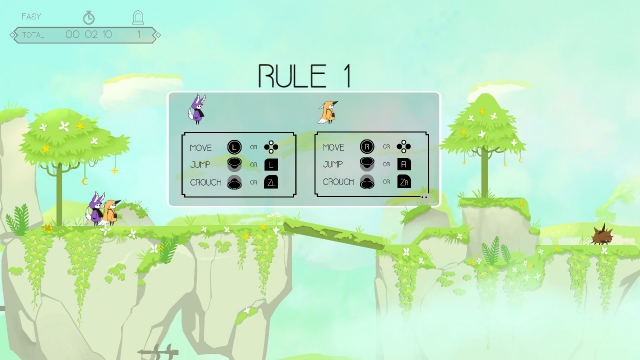 Brain Meltdown Into Despair looks like a super cute and colourful 2D platforming game that perhaps a child would enjoy playing, but that is not the case. This game is freaking hard, Brain Meltdown lives up to its name! Although it isn't aimed towards children, I do wonder if it wasn't because we're used to normal platformers if we'd adapt more easily to this control scheme. My brain is so used to platformers like Super Mario and Mega Man, it’s hard to have to change its hardwiring and constantly remember that I am controlling both the characters. 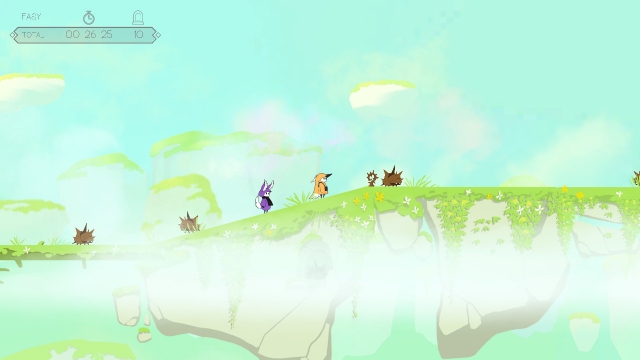 Brain Meltdown has a simple control system. You move right or left using the thumbstick, the left for the purple character and the right thumbstick for yellow. You can use the L and R buttons for jumping, but I found it a lot harder to keep track of who I was controlling. To jump just push up on the thumbstick, and to crouch down hold down. Your character has the ability to walk while crouching to go under obstacles like thorns or spinning blades. Jumping on your enemy to defeat them is not an option in Brain Meltdown; if you decide to try to go all Mario on them you will die. So you have to jump over all the enemies and obstacles in your way. Make sure to press the direction you want to jump in, lest you fail and die, returning to the last checkpoint you passed. 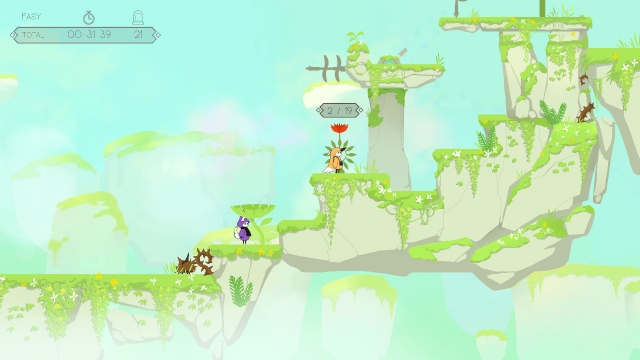 Luckily Brain Meltdown never makes you start at the very beginning of the level when you die if you have reached one of the numerous checkpoints. There is no game over, it just punishes you by making you play the same section over and over again until you finally make it to the next goal. There was one section where I died over 50 times in less than 40 minutes. I don’t think I have ever sworn as much playing a game as I did with Brain Meltdown. It’s so frustrating when you know what you need to do, but somehow keep messing up the simple stuff. Especially when you get further than you have before, but not quite far enough to reach the next marker. I found once I got flustered it would take a bit to get collected and think clearly. 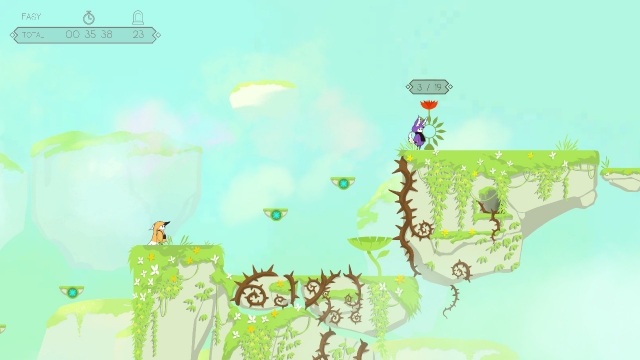 Brain Meltdown Into Despair is a really pretty game. The backgrounds help you feel calm with its serene colours, with the platforms and structures you need cross black. It’s a really nice contrast! Accompanying this is very calm music that should help your nerves and make you relax a bit. Although when I got stuck in the same area for hours, no amount of calm music was going to save me. There was more than once when I just walked away for a break. 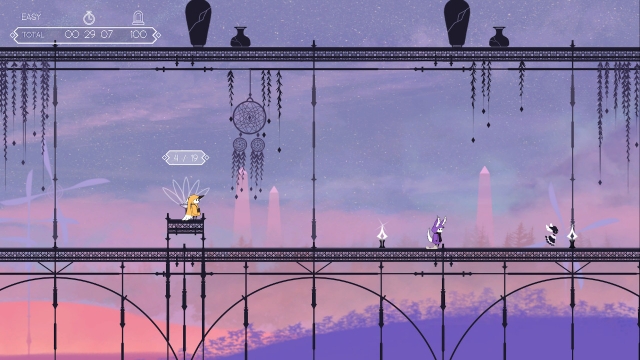 After hours of playing and barely making any progress, I started to question my gaming skills. I wasn’t dying because of flaws in the game, just little mistakes like moving the wrong character at the wrong time. I thought I was good at platforming games and multitasking, I’m apparently not as good as I assumed. After playing for a while you will understand why this game is called Brain Meltdown Into Despair! I wish some of the checkpoints were placed closer together because some sections feel incredibly long and difficult with the obstacles that you need to get through. If I get past a very challenging area, it would be nice to not have to get stuck in that same area for hours. It’s a little disheartening to have played for hours and only reached the fourth checkpoint out of 19 in the game. I wish the easy mode was a little less challenging so I could make more progress. If you love challenging games that really test you, Brain Meltdown Into Despair is one of the hardest games I have personally played. I did feel a big sense of accomplishment getting through an area to the next checkpoint, but I think it was overshadowed by the sense of relief I had knowing that I would not have to challenge that part again!

Brain Meltdown Into Despair is a beautiful game that really lives up to its name. It delivers an incredibly difficult experience that changes the way you have been controlling your game character for years. Controlling two characters at once sounds easy, but it’s not!