Let’s not beat around the bush, if you’re here reading this, you already know exactly what’s on the menu. Five new maps, two new guns and a side order of deranged serial killer (not a typo) are the order of the day for Ghosts’ first DLC package: Onslaught. Aside from the few - sometimes bizarre - extras, this is still all about the new arenas that Infinity Ward have created, so it’s a shame - and not really surprising - that much of Onslaught’s offerings are just more of the same.

Both Containment and BayView, the largest maps of the bunch, follow suit with the worst of Ghosts’ original maps, being too large for 6v6 teams, leading to copious amounts of camping and too much downtime. Set in a generic, drab town, Containment is building heavy, featuring side-alleys available for flanking, and a bridge slap-bang in the middle that offers a faster route between both sides of the map. The trade-off for direct assault is the inability to use your minimap, as the bridge is home to a dilapidated truck carrying nuclear materials. It’s a pointless gimmick, as you’re unlikely to linger in the area for more than a few seconds for fear of being picked off from almost any direction.

BayView fares far better in the visual department, taking place in an impossibly colourful seaside town, complete with sweet stalls and a usable tram system. Yeah, every map in this DLC features a gimmick, and BayView’s is just as redundant as Containment’s.

Bordering just over half the map, the tourist transport goes back and forth throughout each match, offering a slow-moving, easily spottable ride for anyone with a death wish. Within the tram’s borders, you have a plaza which serves as a death box for any who venture too far in, meaning you’ll find most people camping in the balconies that surround it, hanging around like vultures. 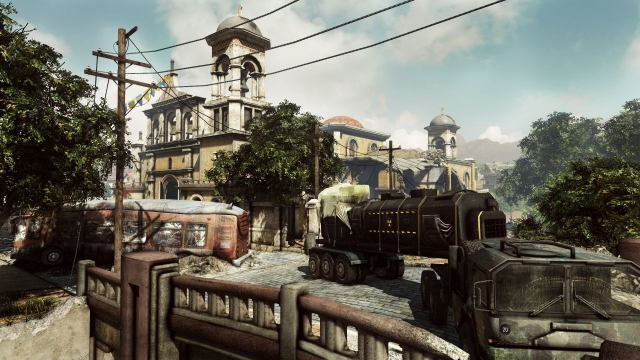 As is now customary, Ignition is a remake of a previous map in the series, this time being a spit and polish of Scrapyard from Modern Warfare 2. It looks good, and remains largely unchanged from its original incarnation, but has a few new quirks. Now taking place in the grounds of a space center, a shuttle liftoff minutes into a match will litter the map with rocket fuselage, providing extra cover. A new level specific killstreak features too, enabling you to activate a rocket booster to eviscerate anything in its path.

The last competitive map, Fog, is by far the best, and not just because you get to play as Michael Myers. The roughly circular map is the perfect size, and its creepy atmosphere (replete with cabins and tunnels decorated with ritualistic trinkets) is more than accommodating for the Myers care package reward. Predictably, he’s nothing more than a reskinned maniac with a fire axe instead of a knife. Overall, it’s the most balanced map by a country mile, which is more than can be said of the new Maverick rifle (read: it’s grossly overpowered). 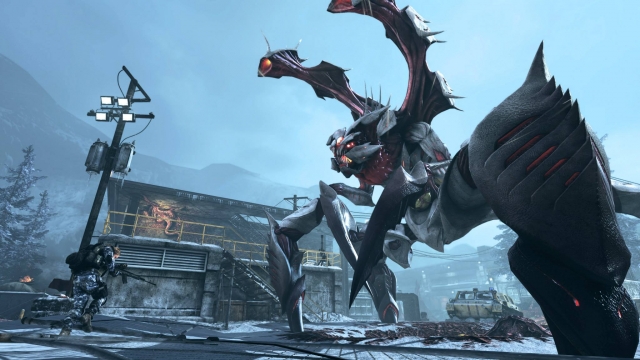 All that leaves is Nightfall, the second offering for Extinction enthusiasts. Again, you need to use the industrial-sized drill to destroy the alien hives and get to the bottom of what caused the outbreak in the winter-themed research facility. The objective-driven co-op mode provides the much needed change of pace from all the player vs. player slaughter, but aside from the change of locale, not much is new with Nightfall - but then, there doesn’t really need to be.

It’s more of the same then for this DLC pack. That’s probably what most would expect given the series’ track record, but we’d like to see more imaginative maps in the same vein as Fog make the cut in the future.

Onslaught is average as far as map packs go, but if you’ve got a hankering for more playgrounds of death to run around in, it is probably worth the plunge.

Infinity Ward’s first map pack for Ghosts is a largely by-the-numbers update to its multiplayer. There’s nothing here you haven’t seen before, but for fans, the extra content should help to extend the replay value of an increasingly repetitive franchise.