Chances are you won’t have heard of Captain Tsubasa. For me, however, it was actually one of the very first anime I remember watching as a kid, though this was a Cantonese dub made for the Hong Kong network TVB, where the show’s title was basically ‘The Football Kid’ and the titular hero’s Chinese name was similar to my own.

Suffice to say, the news that Bandai Namco was releasing a new Captain Tsubasa game, the first in a decade, was a huge surprise. It might be decades ago since I last watched it but I was excited with the prospect of performing Tsubasa’s signature overhead kick that’s so powerful that the ball sends the goalkeeper to the back of the net. 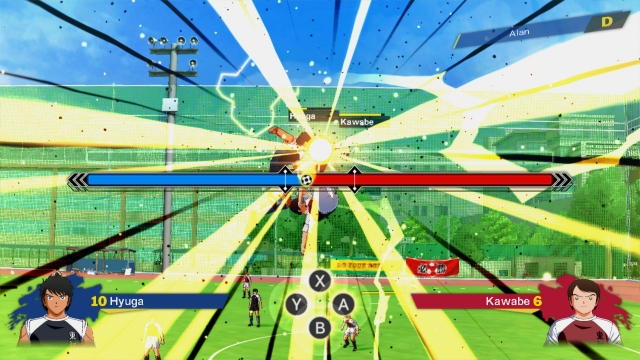 Compared to the annual FIFA and PES instalments that are all about simulating the real thing (or more arguably simulating how football looks on TV), a silly over-the-top arcade football title akin to Super Mario Strikers also sounds like just the ticket. But if that was what you were expecting with Captain Tsubasa: Rise of New Champions going in, prepare to be disappointed.

After the prologue tutorial, which sees Tsubasa on the world stage playing for Japan, it cuts back and turns out the game’s campaign is set during Tsubasa’s last year at Nankatsu Middle School where he’s looking to take his team to their third consecutive victory in the national junior championship. That might seem lower stakes, but for Tsubasa, it’s all-or-nothing as we’re introduced to other fierce rivalries between other schools. 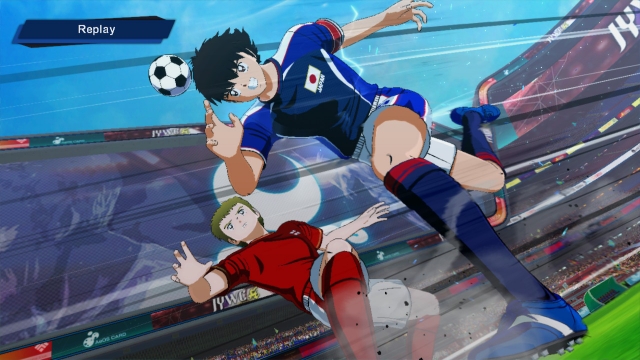 It’s quite a meaty campaign too, though that’s mostly going by the number of dialogue cutscenes there are, although you can also unlock more that fills you in on Tsubasa’s earlier memories and the important friendships and mentors established in the manga. While fans will appreciate it and it’ll help fill in a lot for newcomers, there’s just a bit too much of this when you’d rather just get to the actual football itself.

Once on the pitch, it’s your basic football fundamentals - 11 vs 11, passing, dribbling, tackling and shooting to score against the opposing team before time runs out, where ties are then decided by penalty shoot-outs. Yet, it doesn’t really play like most football games or a normal match, because whereas it might be possible to break through and shoot a goal in the first minute, the defence in New Champions is ridiculously tight. 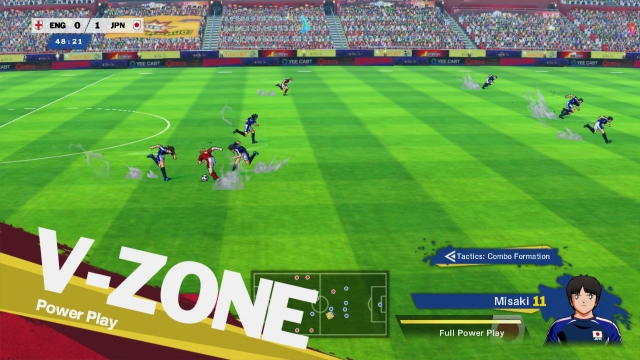 Try as you might, you can’t angle a shot past the keeper because they’ll always catch it. Everything in this game is governed by a spirit meter, so although anyone can dribble or pass a ball, to pull off a skill like running, shooting or saving needs spirit. Getting a ball past the keeper then means continuously firing shots at them until their spirit is drained, which then gets you a cutscene where the keeper has got their hand on the ball but it will slip through their fingers or the shot is so powerful that they go flying back into the net.

Let’s also address the way tackling happens in this game, where fouls don’t exist. Forget diving, you can shoulder barge into another player and send them flying six feet in the air without any repercussion - but then they can do it to you too. At first it’s hilarious, but then gradually it feels like bullshit, and though you can use spirit to successfully outmanoeuvre a player, the timing for this feels very inconsistent. That’s the same for other buttons as sometimes I hold down a button too early to find my shot hasn’t charged up while another time I pressed to pass only to be tackled. 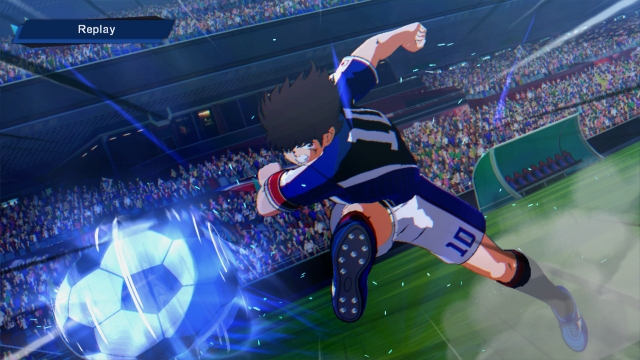 Holding to charge your shots also takes far too long, unless you perform it right after you’ve outmanoeuvred someone, which gives a little boost, but chances are you’ll have also spent up your spirit thus preventing you from executing one of the special shots that can best break the keeper’s defence. All these frustrations result in matches where it feels like pulling teeth just to get 1-0. And believe me, you don’t want it dragged out to penalties because that really does feel like a total crapshoot.

The other problem is that campaign matches are filled with cutscenes during the match. Admittedly, some look cool and as ridiculous as you’d expect - some are even taken from famous scenes in the anime - but it really messes with the flow of the match. The worst one involves a cutscene which results in you automatically conceding a goal, and there’s no way around it. 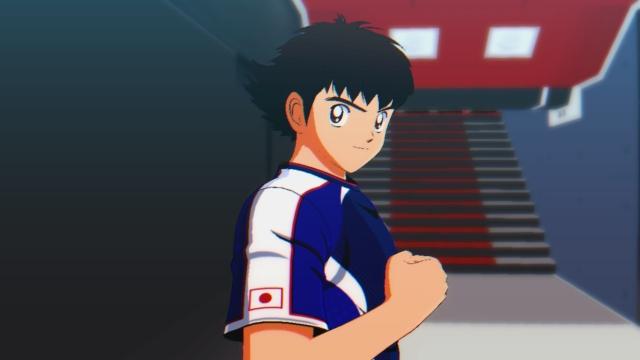 In comparison, a separate campaign mode where you create your own character to compete in the junior league tournament feels less weighed down by the above. On the other hand, it introduces its own complicated semi-RPG progression systems, none of which is very well explained. In fact, New Champions just does a bad job of explaining itself, so that you’re none the wiser about how to pull off most of the absurd flashy special shots you signed up for. Even in Tsubasa’s campaign, you’re still being introduced to a tutorial leading up to the final match when they should have surely taught you it from the very beginning.

What’s left then are modes to play casually and online, where you can make your own league or knockout tourney, even create your own anime team with their own custom-made emblem. That said, you’ll still have to play through the campaigns if you want to unlock all of the junior international teams available, which start off at a pittance, unless you want a weird situation where a tourney has a mix of junior school and international teams. 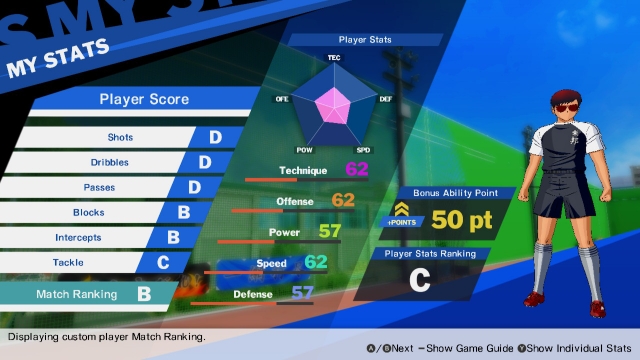 Certainly, playing Captain Tsubasa: Rise of New Champions did stoke a bit of nostalgia for me personally, but that’s not enough to pave over its frustrations, so it will do even less for the majority of players unfamiliar with the source material. And unfortunately, those hoping for another Mario Strikers will have to make do with the football event from the Mario and Sonic game for an Olympic event that never happened.

An over-the-top arcade football title that’s more frustrating and complicated than it ought to be. While it’s clearly faithful to its source material, that’s unlikely to convert newcomers to Captain Tsubasa. 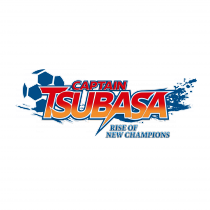