In lieu of this current trend of indie studios reinventing traditional genres, The Gentlebros – the team also behind last year’s Slashy Hero – has released Cat Quest, a 2D adventure RPG that borrows inspiration from classic games such as the Fallout and Legend of Zelda series. Set in a kingdom populated by anthropomorphic cats, your task is to rescue your sister who has been catnapped by the evil Lord Drakoth.

From the beginning, you are immediately thrown into a world where you are free to explore, clear dungeons and complete side quests to level up and gain better equipment. As you venture further north, more difficult enemies will turn up alongside higher rewarding quests to complete. Each questline is divided into individual tasks, which can be anything from a simple fetch quest to fighting a boss. These missions offer a good balance of fun and challenge, bringing very little frustration if you were to fail, but there is a flaw in the system where many questlines will level-gate you from completing them, meaning that later missions will get much harder and possibly higher than your level allows. For example, one of the questlines in the starting town will begin as appropriate for a Level 1 character, but the final one as you progress may lock you out as it has a much higher level requirement. It’s frustrating to have to put off finishing a side quest due to this system.

Regardless, these quests won’t take up most of your time in Cat Quest, as that is instead spent on battling mobs and clearing dungeons. Combat is simple; you can attack with your sword, roll to dodge incoming attacks, and use special spells to aid you. Enemy attacks are warned via an onscreen prompt, allowing you to time your next move perfectly. This gives these exciting situations predictability, but remain intense enough that there are still plenty of chances to mess up.

While the sword is a good weapon to use, some enemies are weaker to spells. You can bind a spell to each trigger and bumper on the controller, and there are enough spells to offer a wide variety of possibilities; such as a vertical ice attack that slows enemies down or a fire attack that deals damage over a large area-of-effect. These abilities can act as a useful advantage during boss battles, so be sure to pour the rewards you get from completing quests and killing mobs into upgrading them. In true homage to the RPG genre, Cat Quest also suffers from a steep grind that occurs in late-game content. Most of your time here will be spent farming mobs and clearing the same dungeons you’ve done a few times already. By this point, I had hit Level 70 with roughly 80% of dungeons cleared and all but one side questline completed. There were still some quests and high-level dungeons available that required me to be over Level 90, meaning I would have had to spend a few hours grinding up to that. I think The Gentlebros could have avoided this repetition by allowing each dungeon to procedurally generate a layout with random enemy spawns. It would have made level progression a lot less boring if I had surprises awaiting me every time I entered a cave.

Beyond how the game feels, the main thing I can praise Cat Quest for is its attention towards creating an aesthetically pleasing videogame. From the lovable art design of the cats to the sound of an enraged feline in battle, The Gentlebros have really nailed the aesthetics of Cat Quest. I feel like if any other animal had been used as the theme for this game, it wouldn’t have been as effective. 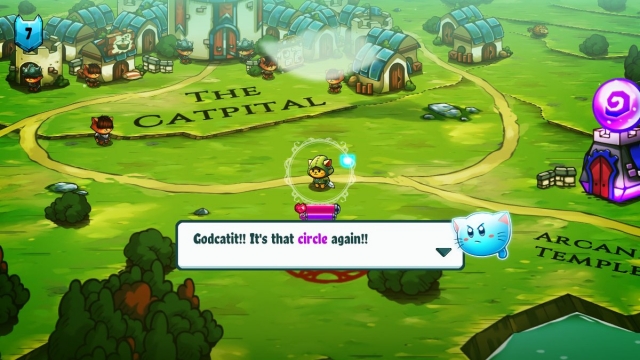 As I played this on the Switch, I could immediately notice how well things ran in both docked and handheld modes. Cat Quest runs at a fine 60 frames-per-second in both instances and I experienced no input lag or slowdown. The only thing I found disappointing was that it does not utilise the HD Rumble feature of the Switch, something that action-oriented games can operate well. This didn’t really take anything away from the game, as there were enough visual and audible cues to know when I was being attacked, but it would have been a good feature to consider for the Switch version. Nonetheless, due to the fast paced, "pick-up-and-play" nature of the game, I believe this platform is the best option for Cat Quest.

Whether you’re a cat lover or not, Cat Quest creates an ideal blend of charming graphics and traditional hack-and-slash gameplay. Despite holding back on a few things, the satisfying combat and convenient loot system show that The Gentlebros have a tremendous understanding of RPG mechanics and – to let the cat out of the bag – it could pawsibly be my favourite game of the year.