At first sight, a point-and-click, noir-style game starring characters who have animal heads and human bodies seems pretty odd. In Chicken Police: Paint It Red, you take on the role of Santino “Sonny” Featherland, a cop who has been on the force for 20 years and is only 121 days away from retirement. Seeing that, I was instantly afraid of what was going to happen to Sonny. If movies have taught me anything, saying that you are “blank days away from retiring” means that something bad is sure to happen to you. Sonny is your stereotypical gritty, alcoholic, heartbroken cop, who is too old for this shit.

Chicken Police is set in Clawville, a town that is known for its colourful characters, but is shown only in black and white. Colour is only used in a few instances in the game to draw your attention to certain characters or places. The atmosphere of the game feels gritty and dark, and it is always raining, just like all the classic film noir movies you love, like Sin City, or The Maltese Falcon. As soon as you start, Sonny is visited by a dame in distress, Deborah Ibez. Her employer, Miss Natasha Catzenko, the owner of the Czar Club in town, has been receiving threats and feels like she is in danger. It’s clear that Deborah knows more than she is letting on, so you will have to use your interrogation skills to make her open up and share the details with you. 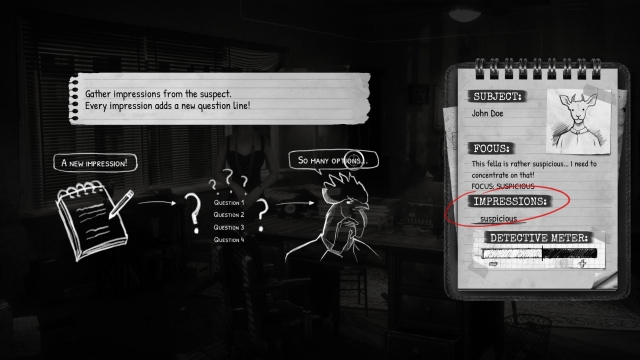 When the game goes into interrogation mode, Sonny will tell you about the personality of the person you are questioning and give you hints on how to proceed. The player is presented with multiple questions you can ask, then you are scored according to how focused the questions were to the case and how much you found out. It definitely takes a while to figure out the best way to question each character; a method that works well on one character, doesn’t necessarily work on another. After speaking with Deborah, you realise that this case is a lot more than just some harmless threats, you find out that Natasha is dating the mob boss in town, which instantly makes the case more difficult to solve. Sonny realises that he is way over his head with this case, so he decides to get in touch with his ex-partner Marty MacChicken. They were celebrity cops, Marty loved being in the spotlight and Sonny not so much. The last time they spoke, it ended up with Marty shooting Sonny in the comb, so it seemed fitting to find him at the shooting range in the precinct. Since you are there anyways, you can take some time and fire at a few targets and try to get a better score than your partner and rivals. 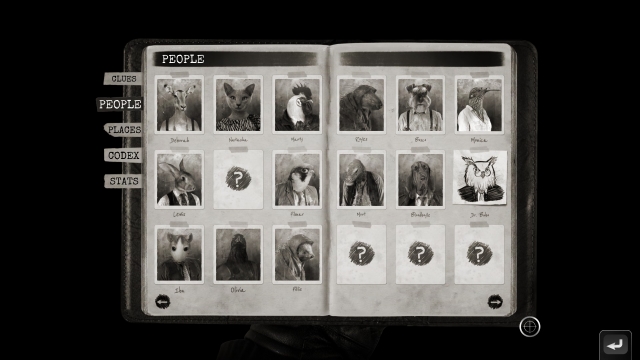 The game boasts a huge cast of characters to interact with. At first the human bodies with animal heads may seem a bit weird, but it is done so well it won’t take long to get used to. They even took the time to animate the characters blinking, and their mouths/beaks move while the character is talking. The voice acting is great, every character has a unique sounding voice along with their own personality and backstory. As you meet new characters their profile and information will be added to your notebook, so at any time you can check out the info you have.

Besides a notebook, Sonny also has a map that shows you all the locations you can check out in Clawville. When a place gets mentioned in a conversation, it will automatically get added. Main Scenes are permanent and they can always be revisited, but some of the locations, called Limited Scenes, are time sensitive and have to be visited in the required time frame. They will be inaccessible after this time, so be sure to check them out while you are able to. Closed Scenes are not open to you for the time being, as you play through the story, depending on your actions, this may change. 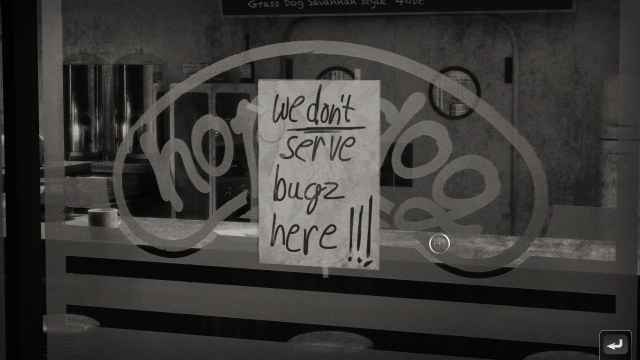 The story and mystery in this game really pulls you in. The issues the characters face in the game are quite topical to ones going on today. Characters have issues with interanimal relationships, there’s racism and bias between the animals and insects, there really is a lot of depth in this story. Even though the story deals with a lot of serious issues, there is a lot of cheesy humour mixed in here to keep the mood on the lighter side. Since I don’t want to ruin the mystery in the story, I’ll just say you get to channel your inner rooster version of Humphrey Bogart with great internal dialogue, solving mysteries like code breaking and taking down the bad guys. What more could you want? 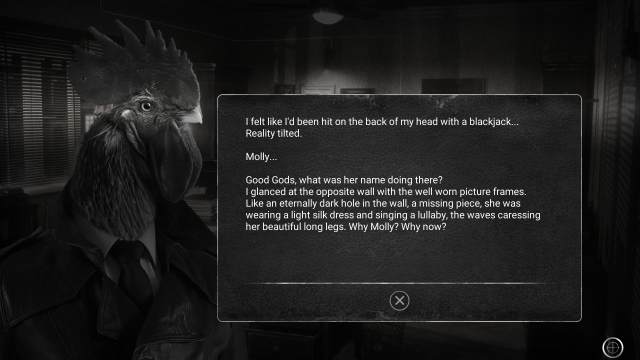 The Wild Gentlemen have created a murder mystery in Chicken Police that takes everything you love from classic noir films and mixes it with animals, cheesy humour and great voice acting to create a truly one-of-a-kind experience. This game really surprised me, and has become one of my favourite indie games of the year. It is so well done and I love seeing animals, birds and reptiles all dressed to impress in leather coats and fancy dresses. There is a demo for Chicken Police on Steam and I highly recommend you try it out and get pulled into the mystery.

Chicken Police: Paint It Red is a gorgeous looking film noir style game that takes everything you love from the classic buddy-cop movies and mixes it with a huge cast of anthropomorphic characters. The story, voice-overs and adult humour are great making this a must play.

This looks really good, another one for my wishlist I suppose!

I bet you can't wait to beakin playing it

Lots of puns in the game, and it's really good, totally worth checking out :)

Does it have any Easter Eggs?

A clucking good pun that is

It looks like these puns are coming to a hen

No need to flap about it

Oh, I'm just pullet on your leg! I'm a chick that loves puns

all these puns are getting me eggcited!

Just wait til you guys see all the cock jokes in the game :p