Fairy tales: these short stories that, as children, many of us have read - or had read to us at bedtime - more times than we care to remember are a staple of growing up. Stories of villainous wolves, victimised or imprisoned maidens and every fantastical thing in between filled our young minds and dreams, with more than a few of them becoming so ingrained into our collective consciousness that it becomes difficult to imagine such a way that they could be told any differently.

Cinders, a visual novel from MoaCube, actually released on PC and Mac way back in 2012. With a recent Switch release marking the game’s console debut, porting duties were handled by MoaCube with assistance from Crunching Koalas. On face value, Cinders appears to be nothing more than a retelling of Cinderella, but an hour or so into it and the inkling that there’s more going on than what’s initially apparent blossoms into the realisation that this is an intriguing and vastly different take on the classic story. 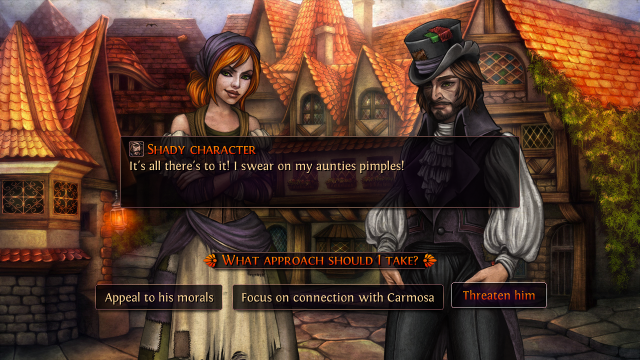 The majority of the narrative is told from the perspective of the titular Cinders, a young woman who lives in her family’s manor with her stepmother Lady Carmosa, along with her two older stepsisters Gloria and Sophia. Cinders’ mother died during childbirth, while her father passed away not long after remarrying. In traditional Cinderella fashion, Cinders endures an existence in which she is ostracised by her makeshift family unit and treated as a servant, confined to sleeping in the kitchen, her day to day life consisting of little more than completing her chores and running errands. One night, Perrault, Captain of the Prince’s Guard, makes a surprise visit to the manor, demanding to see Cinders. The game then jumps back seven days and chronicles the events leading up to that visit.

How you reach that destination will differ depending on the dialogue choices you make, actions you decide to take during the course of the narrative and the condition of the relationships you forge. There are four distinct possible endings to discover, with variations presenting themselves in accordance with your prior choices. As I mentioned earlier, Cinders isn’t content with being a straightforward retread of the familiar tale, and your expectations of what exactly the story has in store will almost certainly be tossed aside as you progress. My initial playthrough yielded a conclusion that was not overly dissimilar to the story I first heard as a child, but subsequent play will uncover wildly differing endings that veer off in vastly different directions. 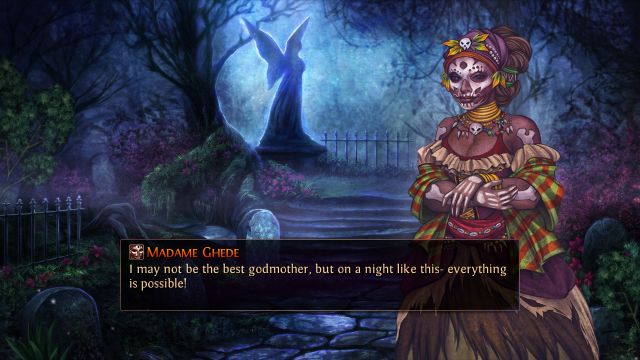 Whatever path Cinders’ journey takes, she is the crowning jewel of an excellently written story and cast of characters. She’s an intelligent woman, ever ready to provide humorous observations or witticisms on the supporting cast or the subject at hand during any conversation. Regardless of what branches you take through the story, Cinders will soon set a chain of events in motion to alter her dire circumstances and change her life for the better, with potential help from a handful of characters who all had prior relationships with Cinders’ parents before their deaths. Cinders also has a message to convey about rejecting fate, carving one’s own destiny and taking responsibility for one’s own actions, without ever being overly blunt in doing so.

Every scenario in Cinders is beautifully presented, with a soundtrack that suits the mood of any given scene, alongside stunning backdrops and character designs that really pop, especially on the Switch’s screen in handheld mode. None of the scenes in the game are voiced, but that’s okay: by relying on text alone, Cinders’ narrative is able to shine on its own merits, unhindered by any potential pitfalls - such as sub par voice acting - that spoken dialogue might have brought with it. 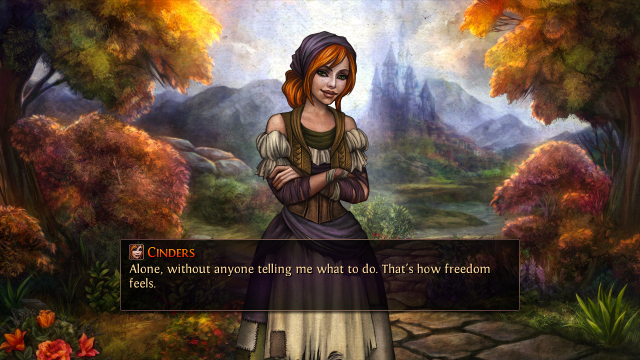 Cinders isn’t an especially lengthy title; I finished my initial playthrough in one sitting that clocked in at around four hours. It is, however, highly replayable due to the wildly differing endings you’re able to experience and just by virtue of it boasting a really, really enjoyable narrative that puts a fresh spin on a well known tale. If you’re into visual novels, picking up Cinders isn’t something you’ll regret. Likewise, if you’re a genre newcomer, Cinders’ short running time makes it ideal if you want something to dip your toes into before plunging into 50-hour behemoths such as Steins;Gate or the Danganronpa trilogy.

Cinders’ story had me hooked from beginning to end, while its compelling cast of characters, the themes it explores and its deviations from the traditional narrative of Cinderella made for a surprisingly poignant tale that I won’t soon forget.