The ‘story’ of Coffin Dodgers is a comical, if not bizarre one. The Grim Reaper has come to collect the souls of a group of elderly residents in a retirement village called Sunny Pines. However, seven of the pluckiest residents vow to fight for their souls as they challenge the Grim Reaper to a series of… mobility scooter races? Yes. On the face of it, that isn’t a bad idea. Just imagine how much easier Ocarina of Time would have been had Link challenged Ganondorf to three laps around Hyrule on motorbikes.

I’ll get right to it - Coffin Dodgers is a bit of an unbalanced and limited game. Granted, if you don’t focus on the storyline and turn your main focus to the actual racing itself it can be somewhat enjoyable, mainly due to its fast pace and tight racetracks. But the enjoyable chaos wears thin soon enough for a few avoidable reasons. The controls are very sensitive, and having to brake frequently can become annoying. If you do master the controls, there is the issue that once you take a considerable lead it is very difficult to be dethroned. Moreover, these frustrations come to fruition when the AI has a considerable lead, as it is very hard to dethrone them. You can even pick up a boost from boxes while you’re in first place, which just takes even more off the challenge when you are leading. 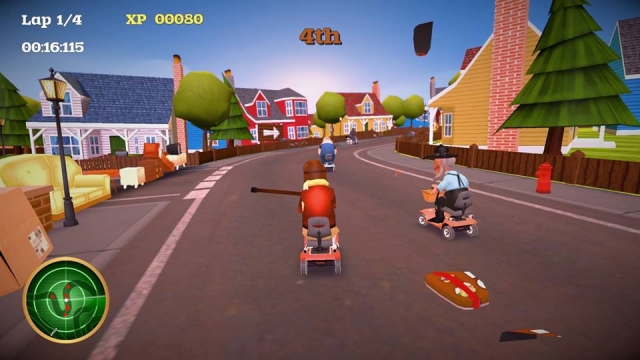 It seems wrong to mention this game in the same sentence as Mario Kart, but it is a justified reference. Because being in first position in Mario Kart means nothing other than having a huge target on your back, it means races are never really over until you cross the chequered line. In Coffin Dodgers, you don’t get that feeling, because the weapons are pretty redundant and ineffectual, with even the good weapons being hard to use. One ‘weapon’ I did like was the walking stick you can hit other racers with and with good timing you can knock people off their mobility scooters, which led to some very amusing moments. Also, for the price of £9.49, you have to offer Coffin Dodgers some mitigating factors in that sense.

There are seven playable characters to choose from (eight once you finish the story mode), twelve tracks, and one final longer track upon completing the others. You will likely only choose a character based on preference as they aren’t unique in any other way, other than having differing biographies. You can customise your mobility scooter by adding different paint jobs, more speed, better acceleration and upgrading your stick to an umbrella for example, but the customisation options are rather limited. 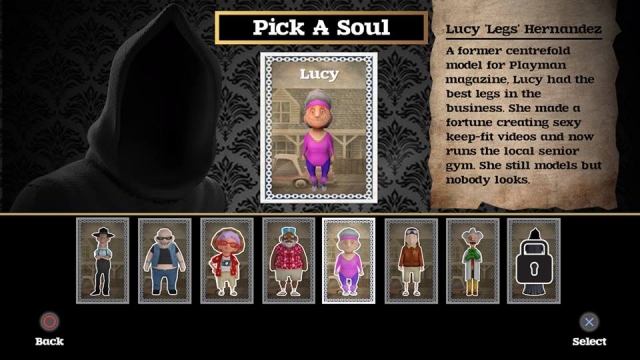 The tracks aren’t anything to write home about, nor are they a write-off, as they are all relatively similar, but they all present different challenges in their own right. They have a certain charm to them with their lively visuals and the jovial soundtrack, but the soundtrack can become infuriating due to its repetitive nature.

Within story mode, you race in the four sections: Village, Town, Farm, and Graveyard. There are three tracks for each section with one race each day. At the end of third race in Village, one resident is picked off, only to return as the undead in the next phase. Two more residents are picked off in Town, and similarly in Farm also. The Graveyard section brings the most tension from the races, and produces the best tracks – and one more resident is taken away at the end of Graveyard. This leaves a final section called Showdown, a long track with just the two laps – but it is a winner-takes-all between your character (assuming you are the last OAP standing), and the Grim Reaper. It is fair to say that story mode was actually well thought out. 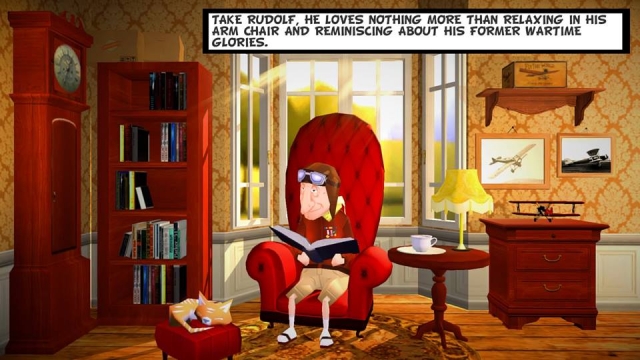 For me, it is strange for a racing game to not have any online multiplayer features. I played the local multiplayer with my brother which was actually quite enjoyable, as it weirdly took me back to playing WaveRace on my Nintendo 64. Unfortunately, that feeling of nostalgia should be backed up by stronger gameplay from a next-gen title. There is more than one game mode however, one of which being an open world. I was a huge fan of Diddy Kong Racing, with the game modes that existed outside of a normal race and I thought this would be somewhat similar in respect of its price. However, the open world was pretty undistinguished, and the Crazy Grandpa game mode was entirely unmemorable. 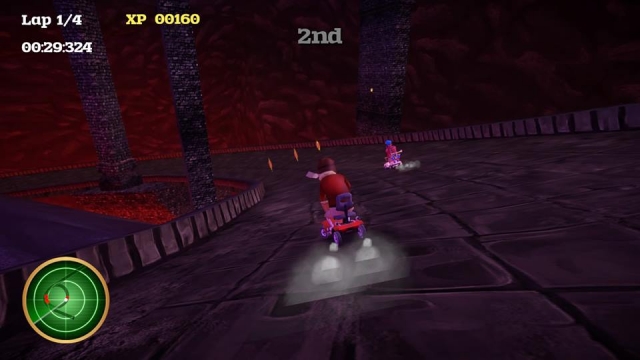 There were elements that I enjoyed about Coffin Dodgers, and the fast-paced action and ragdoll physics led to some crazy races and funny fails. I enjoyed the story mode, especially with its amusing ending. Plus, the final showdown race is brilliant. But the game lacks depth, and doesn’t really have that draw that made me want to keep playing, especially with the omission of online features. In respect of its price I think it is a decent buy, but the game could have been more.

There were elements that I enjoyed about Coffin Dodgers, and the fast-paced action and ragdoll physics led to some crazy races and funny fails. I enjoyed the story mode, especially with its amusing ending. Plus, the final showdown race is brilliant. But the game lacks depth, and doesn’t really have that draw that made me want to keep playing, especially with the omission of online features. In respect of its price I think it is a decent buy, but the game could have been more.

Coffin Dodgers out now on PS4, Coming Soon to Xbox One

Coffin Dodgers Coming to PS4 and Xbox One

i will dodge this game